There’s nothing like a piece of candy between two bipartisan buds.

Cameras captured the moment during the funeral service as Sen. Joe Lieberman was delivering his eulogy for McCain who died after a battle with brain cancer at Washington National Cathedral.

She mouthed the words “thank you,” with the flash of a smile. Suffice it to say the mint was enough to refresh the internet. People flipped for the “Michelle Obama George Bush” candy moment.

So at an appearance on NBC’s Today show on Thursday morning, Obama explained the gesture, and her relationship with her Republican friend.

“I didn’t realize at the time that anybody noticed what we were doing. President Bush and I… we are forever seat mates because of protocol, that’s how we sit at all the official functions so he is my partner in crime at every major thing where all the formers gather,” she explained. “So we’re together all the time, and I love him to death. He’s a wonderful man. He’s a funny man.”

But there is one key detail people missed. The Altoids were apparently from a place they both called home – the White House.

“I will add they were old cough drops. That’s the funny thing, because they were in the little White House box, and I was like, ‘How long have you had these?’ And he said, ‘A long time, we got a lot of these!'”

She went on to discuss why the bipartisan gesture resonated.

“That’s what people are hungry for…. Party doesn’t separate us, color gender, those kinds of things don’t separate us. It’s the message that we send,” Obama said. “If we’re the adults in the room and we’re not showing that level of decency, we can’t expect our children to do the same.”

Obama appeared on the Today show to discuss International Day of the Girl. 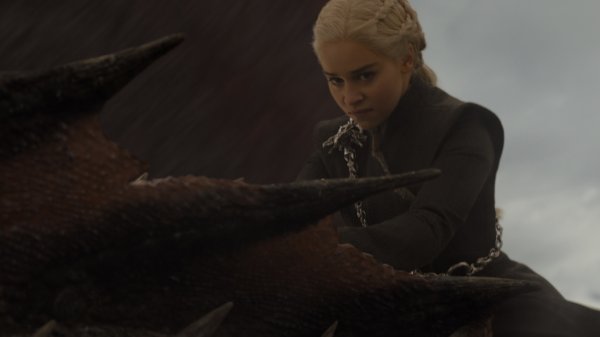 Game of Thrones Deployed a 'Thing That Kills Drones' to Save You From Spoilers. What Is That?
Next Up: Editor's Pick