Just days away from pulling its last troops out of Afghanistan following 20 years of protracted war, the U.S. faces a new terrorist threat: Islamic State-Khorasan Province.

The group, abbreviated ISIS-K or ISKP, claimed responsibility for the coordinated bomb attack Thursday at the Abbey Gate of Kabul’s Hamid Karzai International Airport, where hundreds of Afghans and foreign citizens had been queuing up to get on the last evacuation flights out of the country. At least 90 people were killed, including 13 U.S. service members. It was the deadliest day for the U.S. military in Afghanistan in a decade.

ISIS-K was labelled by the Institute of Economics and Peace’s Global Terrorism Index in 2019 as one of the most dangerous terrorist organizations in the world, though many believed it had been decimated by U.S. and Afghan military counter-terrorism efforts.

The attack raises questions about whether Islamist terrorist groups will yet again find safe haven in Taliban-controlled Afghanistan. However, this time around, Afghanistan’s politics are different. The Taliban sees ISIS-K as a rival, not an ally—and ISIS-K is neither as large, nor as wealthy as al Qaeda was.

“They are definitely not comparable to al Qaeda in 2001,” says Kabir Taneja, a fellow at New Delhi-based think tank Observer Research Foundation. “For now, they are an Afghan-based insurgency with diminished power.”

While experts say it’s difficult to estimate how ISIS-K’s presence in Afghanistan will play out in the future, the attack at Kabul airport indicates that it is a growing threat.

“The fact that they could impact Western forces and the Taliban in one attack is a big win for them,” says Saurav Sarkar, a security specialist and former visiting fellow at the Stimson Center, a Washington, D.C. think-tank

Here is what you need to know about the Islamic State-Khorasan Province, a.k.a. ISKP or ISIS-K.

What is Islamic State-Khorasan Province?

The Islamic State-Khorasan Province is a regional offshoot of the extremist group Islamic State, which took control of large swaths of Iraq and Syria in 2014. It came into existence in January 2015 with its base in the Nangarhar province in eastern Afghanistan, which shares a border with Pakistan.

Many of its initial members were fighters with the Tehrik-i-Taliban Pakistan (TTP), a militant organization in Pakistan, according to a Congressional Research Service report. The breakaway militants crossed the border into Afghanistan following an operation by the Pakistani army to drive them out. Looking for a new flag to rally around, these fighters are believed to have joined other militants in Afghanistan and pledged allegiance to the Islamic State, which had just declared a caliphate in 2014.

“The euphoria around ISIS was quite high then, and the best brand to co-opt was the Islamic State,” says Taneja. “It also gave them immediate recognition, in terms of attracting personnel and fighters.”

The group is believed to be more extreme in its views on women and religious minorities than other militant groups in the region—including the Taliban. Since its inception, ISIS-K has attracted militants who had fallen out with various other insurgencies in Afghanistan.

At its peak in 2018, the group had up to 8,500 fighters, and claimed responsibility for carrying out some of Afghanistan’s worst atrocities in recent years. Earlier this year, a bombing at a girls school in Kabul, which targeted members of the Hazara ethnic minority, killed at least 90 people—many of whom were students. The group also is believed to be behind an attack on a hospital last May, in which terrorists fatally gunned down 16 pregnant women and two children.

These attacks came despite major setbacks in 2019. ISIS-K was driven from its base in eastern Afghanistan by U.S. and Afghan military offensives. Though the group was diminished in rural areas, experts believe it continued to operate sleeper cells in cities like Kabul.

Taliban in conflict with ISIS-K

Unlike the Taliban, which doesn’t have ambitions beyond Afghanistan, ISIS-K is part of a larger group that is intent on spreading its ideology around the world. The group is also more extreme than the Taliban and has criticized Taliban leaders for negotiating on peace deals with the U.S.

“Ironically, they call the Taliban a puppet regime of the U.S.,” Taneja says.

While ISIS-K is not as powerful as the Taliban, experts say its motivation in attacking Kabul’s airport was re-establishing its relevance in the region.

“They wanted to make the Taliban look bad and incapable, as they are in-charge of Kabul now,” says Sarkar. “And in the process, attract attention to gain more recruits.”

Sarkar said he believes the Taliban “will go all out to ensure that the group doesn’t gain ground in the country,” because it views ISIS-K as a threat to its promises of restoring security and stability to Afghanistan.

A spokesperson for the Taliban condemned the attack at the airport, saying that “evil circles will strictly be stopped.”

For now, at least, the Taliban is far from giving the group a safe haven to plan attacks outside Afghanistan, experts say.

How is the U.S. responding to the ISIS-K attack?

The U.S. overthrew Afghanistan’s Taliban government in 2001 after determining that it had allowed al Qaeda to thrive there, and plot the Sept. 11 terrorist attacks. However, experts interviewed by TIME say an attack from the Afghan-based group on U.S. soil appears unlikely—for now at least.

But the group’s rise is bad news for Afghans. Sarker says conflict between the Taliban and ISIS-K likely won’t devolve into civil war, but he predicts a protracted guerilla-style conflict.

U.S. President Joe Biden vowed to retaliate against ISIS-K for the attack. “We will not forgive. We will not forget. We will hunt you down and make you pay,” Biden said in a speech Thursday.

In a press conference Thursday, Gen. Frank McKenzie, the head of U.S. Central Command, sought to distinguish ISIS-K from the Taliban, saying that he didn’t believe the latter group was responsible for the attack. “[Taliban leaders] have a practical reason for wanting us to get out of here by the 31st of August, and that’s they want to reclaim the airfield. We want to get out by that day too if it’s going to be possible to do so,” he said. “So we share a common purpose. So as long as we’ve kept that common purpose aligned, they’ve been useful to work with.”

Security experts say they are watching closely to see how, exactly, the U.S. responds to ISIS-K—and whether military retaliation against the terrorist group runs the risk of drawing American forces back into Afghanistan. “The next thing you know, it will be a redux of what happened with al-Qaeda in 2001,” Taneja says. 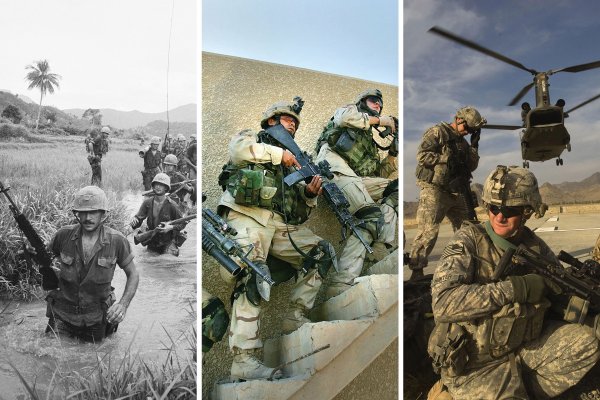 We Have No Idea What We're Fighting for Anymore
Next Up: Editor's Pick