The Taliban Are Promising Inclusivity and Amnesty in Afghanistan. But Some Officials Predict Bloodshed

As the black-turbaned mullahs of the Taliban gather in Kabul and Kandahar to hash out how they’ll govern, the decisions they make will offer the world clues to whether they remain the same brutal regime that controlled Afghanistan before the U.S. invasion in 2001 or adopt a less extreme version of Islamic rule.

Change was not originally in the mullahs’ plans. While they declared an Islamic emirate in name Thursday, it was not clear they would bring back the rules and regulations of their former 1990s government, according to current and former U.S. and Western officials, that repressed women and used public amputations, beheadings and stonings as not only criminal punishments but also entertainment for a population denied access to television or music.

But in recent years, as the Taliban held peace talks with the U.S. in Doha, its leaders were offered counsel by international and regional officials, who urged the group to temper its fundamentalist practices in the interest of winning international political recognition and aid and securing support from young and fairly sophisticated Afghans who bristle at their version of Islam.

Since the fall of Kabul, the militants have been in continued communication with U.S. peace envoy Zalmay Khalilzad, the State Department said Thursday, as well as former Afghan President Hamid Karzai and Dr. Abdullah Abdullah, a senior member of the Ghani government the Taliban toppled. The Afghan officials have been arguing that the group will alienate the international community, and its own people, if it installs a purist interpretation of a religious emirate, with an appointed “emir for life” and an unelected shura council of mullahs ruling the country, according to current and former Afghan and Western officials briefed on the talks.

The Taliban is now in internal deliberations, with its triumphant military wing pushing for a more purist system and a political wing—which includes some of the negotiators from Doha—arguing in favor of a more “inclusive” Islamic system, according to regional officials familiar with the talks. “We want an inclusive Islamic government in Afghanistan,” Taliban spokesman in Doha Suhail Shaheen tells TIME. But he was not forthcoming with details, and a senior Taliban official told Reuters they may install a ruling council, with the movement’s supreme leader, Haibatullah Akhundzada, in charge, perhaps as “president.” That’s similar to how they ruled from 1996 to 2001, with Mullah Omar as figurehead, and the council managing governance.

While the deal-making isn’t done, the group has signaled that they’ll likely retain the Afghan government bureaucracy to run the country, and ordered their followers to protect public property and extend amnesty to “all those who have previously worked for and helped the invaders,” or worked for “the corrupt Kabul Administration,” according to a statement released to TIME.

In the group’s first press conference on Tuesday, Taliban spokesman Zabihullah Mujahid took the first question from a woman journalist and said the Taliban would honor women’s rights under Islam, though he offered few details. The group reportedly invited the Ghani Administration’s Health Minister to continue in the role as the country battles the COVID-19 pandemic. In many areas, the Taliban has called for policemen and other city workers to come back to their jobs.

But U.S., Western and Afghan officials remain highly skeptical. Taliban patrols in Kabul have harassed and beaten Afghans trying to reach the airport, according to U.S. and Afghan officials as well as reporters on the ground. They opened fire on young people demonstrating in the eastern city of Jalalabad and have responded violently to further protests Thursday in other parts of the country. Afghan and Western officials tell TIME that Taliban units are going door-to-door in some neighborhoods, asking for identification papers. (A Taliban spokesman tells TIME that opportunistic imposters are shaking down a scared populace, or taking personal vengeance that has nothing to do with the group.)

Los Angeles Times foreign correspondent and photographer Marcus Yam photographed Taliban fighters on the road to the airport firing automatic weapons into the air, then beating Afghans they’d corralled with “sticks, lengths of rubber hose, knotted rope, rifle butts.” They attacked Yam as he tried to film them. An Afghan pilot was assassinated and at least one former U.S. military translator was reported killed in the weeks before the militants took the capital.

U.S. and Western officials tell TIME they believe that after the last American troops depart, more bloodshed could follow. A regional official tells TIME the Taliban have been taking hard drives from the abandoned computers of former senior Afghan government officials, especially members of the intelligence and national security agencies, from which they can harvest data showing who ordered operations against the militants, sometimes in cooperation with the CIA. Regional security officials are bracing for the Taliban to take retribution.

Perhaps the greatest fear is that under Taliban control, Afghanistan will once again become a stronghold for groups plotting to attack the U.S. homeland. The Taliban have not severed ties with Al Qaeda, which remains entrenched in the country and whose fighters have married into Taliban ranks. The Afghan-based branch of the so-called Islamic State also remains active in the nation as well. The Haqqani network, a key Taliban faction, continues to hold hostage U.S. Navy veteran Mark Frerichs, taken captive in Kabul last year.

Men try to help a wounded woman and her child, who was also injured, after Taliban fighters use gunfire, whips, sticks and sharp objects to maintain control over a crowd of thousands waiting outside the airport in Kabul on Aug. 17.
Marcus Yam—Los Angeles Times/Getty Images

There are incentives for the Taliban to take a more moderate approach to governance than they did while running Afghanistan from 1996 to 2001. The U.S. and the UN still have sanctions in place that could cripple the group’s early attempts at governance, says Brian O’Toole, a former Treasury official who managed sanctions on foreign assets. “It gives the U.S. huge leverage, because the Taliban are going to find conducting any international trade, very difficult.” Billions of dollars in Afghan federal reserves has been frozen by the Biden Administration, according to Ajmal Ahmady, acting head of country’s central bank, and the International Monetary Fund also froze access to its funds, because of “lack of clarity within the international community regarding recognition of a government in Afghanistan.”

Juan Zarate, a counterterrorism czar in the George W. Bush Administration, says sanctions will remain “a significant barrier to the legitimation of any Taliban regime, absent wholesale, fundamental reform on their part or simple diplomatic capitulation and accommodation by the West.” The sanctions could render the Afghan economy “a no-go zone” like North Korea, Zarate says. (China has signaled it will recognize the fledgling government, with Turkey and Russia expected to follow soon after.)

But Gretchen Peters, executive director of the Center on Illicit Networks and Organized Crime, says the Taliban brings in up to a $1 billion a year from the opium trade, extortion and kidnapping, money they already used to fund the apparent pay-off of some of the Afghan officials who gave up without a fight. “They appear to be awash with cash,” she says.

Even without a cash crunch, the Taliban will have to contend with a culture clash. More than 70% of Afghanistan is under 25, and never experienced the group’s harsh rule in the 1990s. The new generation of Afghans have grown up with freedom of expression, social media and satellite television replete with Bollywood action movies and female news anchors. Much of this young population is used to access to education, healthcare, clean running water and electricity—services enabled in large part by Afghanistan’s international ties.

In the Doha talks, U.S. peace envoy Khalilzad spent hours trying to impart international civics lesson to Taliban leaders, according to Western officials briefed on the talks. Khalilzad explained, for instance, that if the Taliban didn’t have a certain percentage of women in the workforce, or committed the human-rights abuses that marked their previous reign, international organizations like the World Bank and International Monetary Fund would shun them.

The Talibs checked the American’s advice with regional officials from Qatar and Pakistan, and got the same answer back: return Afghanistan to the dark ages, with women barred from leaving home and summary executions for the smallest of infractions without due process, and you will be a pariah. Regional sources say Pakistani and Iranian officials warned Taliban leaders in recent weeks against declaring an Islamic emirate.

Afghans march while carrying banners and the flag of the Islamic Republic of Afghanistan, despite the presence of Taliban fighters, in Kabul on Aug. 19.
Marcus Yam—Los Angeles Times/Getty Images

Former top Afghan officials are waiting to see how the group’s decisions play out. One former Ghani official predicted to TIME that if the Taliban are more moderate than the last time, and are able to provide government services and end the fighting, Afghans will embrace them. Another says the group’s outreach to the last government is mere window dressing: “The Taliban will at best will appoint a name or two as a symbol.”

The former governor of Afghanistan’s Logar and Herat provinces, Abdul Qayum Rahimi, told TIME he had decided to stay in the country, in part because the Taliban treated him with respect despite resisting the militants’ onslaught. “They treated me well, and let me rescue around 260 people with me,” Rahimi says, who left the door open to serving in a new Taliban government. “I will see how it comes out.” 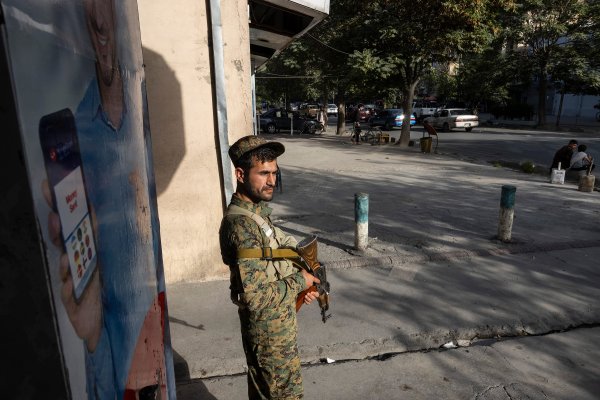 Americans and Afghans Brace for the Siege of Kabul
Next Up: Editor's Pick