'My Future Is Now.' An Afghan Woman from a Threatened Minority Wrestles with What Happens When the U.S. Withdraws

Afghan men pray near the grave of relatives, who were killed in the May bombings near Syed Al-Shahada girls school, at a cemetery on the outskirts of Kabul on June 2, 2021.
Rahmat Gul—AP
Ideas
By Knox Thames
Knox Thames served as the State Department Special Advisor for Religious Minorities during both the Obama and Trump administrations. He is writing a book on twenty-first century strategies to combat religious persecution. You can follow him on Twitter.

“I am afraid of the future,” wrote Farkhondeh Akbari, a Hazara university student from Afghanistan.

She has reason to be apprehensive. In the face of steady gains by Taliban forces, a new U.S. intelligence assessment estimates the Afghan government may only last six months after the American military withdrawal. A return to Taliban rule would be disastrous for human rights, impacting hard won gains for women and girls. But it would also place millions of Hazara in jeopardy, an often overlooked and forgotten religious and ethnic minority.

Hazaras have long faced discrimination and persecution in Afghanistan, and a renewed fear grips Farkhondeh’s increasingly victimized and beleaguered community. Hazaras constitute the country’s third-largest ethnic group and largest religious minority community due to their Shia Muslim faith in this Sunni majority country. Their different beliefs and Asiatic features have made them easy targets. The Taliban was their persecutor during their rule. Now the local Islamic State franchise, known as ISIL-Khorasan (ISIL-K), murders.

In early June, for example, terrorists struck a demining charity, but their assault carried a gruesome twist: they methodically killed Hazara Shia. Halo Trust CEO James Cowan told the BBC that ISIS “sought out members of the Hazara community, and then murdered them.” The attack comes just weeks after the May 8th bombing of a Hazara girls school in Kabul, where more than 85 Hazara children died and 150 wounded.

I met many Hazara in Afghanistan and Pakistan while serving as an American diplomat focused on religious minorities. I’ve listened to grown men cry as they described picking up pieces of their friends after a bombing. ISIL-K wants these Shia “heretics” dead. Perhaps surprisingly, Taliban attacks on civilians generally avoid Hazaras, but they are not their protectors. A Taliban spokesman explained their plans to Islamicize the country in their image, while Taliban military gains led a commander to boast, “When we arrive in Kabul, we will arrive as conquerors.”

These are ominous signs for all minorities and human rights advocates in Afghanistan. But for the Hazara and their youth, the stakes surrounding the U.S. withdrawal are existential. The school bombing killing the next generation of educated Hazara leaders will not be the last.

Farkhondeh’s fear for tomorrow is based on memories of the past and the realities of today.

I met Farkhondeh in 2018 when visiting Kabul in the former special envoy role I held during the Obama and Trump administrations. I wanted to hear from Hazara students about the challenges facing their community. Many hailed from the Hazara neighborhood of west Kabul called Dasht-e-Barchi. The enclave had repeatedly experienced ISIS attacks on soft targets such as maternity hospitals, schools, sports centers, and gyms. Despite the violence and government impotence in finding the perpetrators, Hazara have exhibited remarkable restraint. No reprisal attacks. Few join militias. No calls for “jihad” against western military forces.

Why? Hazara remain committed to the idea of a multicultural, democratic Afghanistan at peace with itself. The community, so long repressed, understands education as a form of empowerment and democracy as a pathway to equality. Literacy levels are high, and almost all girls are educated. Election turnout is always amongst the highest in Hazara regions. Hazara can be found in parliament and government.

Since the Taliban’s overthrow, Farkhondeh and other Hazara youth have poured themselves into this vision of a new Afghanistan. She is a success story, earning a spot as a Ph.D. candidate at the Australian National University. But while her future is bright, she does not believe the same for her community.

Farkhondeh and I exchanged emails recently. She had just written her close friend in Kabul who lost all her female family members in the school attack. Farkhondeh characterized the U.S. military withdrawal as “irresponsible and unconditional.” Her overall view is frank and blunt. “America is leaving Afghanistan in chaos, in bloodshed, amid the operation of some twenty terrorist organizations and an emboldened Taliban that are not compromising an inch for power-sharing, for human rights and for the international call to reduce violence.”

She and all Hazaras watch the peace process warily. “The warring parties are not ripe for resolution nor ready for meaningful negotiation to settle the conflict politically.” Her lack of sanguinity is understandable. She shares the community’s deep concern that attacks on Hazaras will continue after any settlement with the Taliban. “There is a perception that Hazaras have stepped out of their historical roles as subordinates and inferior groups, and hence they should be pushed back.”

And her expectation once the U.S. military withdraws? “Even more brutal war.”

What to do? Some will argue no good options exist to help the Hazara. Every idea has a negative side. While active in Afghan politics, the Hazara are not a power block, so they garner little attention. Arming would provide them cache (politically and militarily), but creates new militias and warlords. Fortifying their towns could also create ghettos. Should they decide to flee, the international community cannot absorb 3-5 million more refugees.

The recent G7 communiqué speaks to the future of Afghanistan, with the heads of state declaring their determination to “help the people of Afghanistan, including women, young people and minority groups, as they seek to preserve hard-won rights and freedoms.” For this to be more than mere words, however, policymakers must give greater attention to the plight of the Hazara.

The U.S. and its partners can respond with meaningful steps. Start by recognizing how ISIL attacks the Hazara community because of their religious and ethnic identity. And help the Hazara secure their rights through a specific emphasis at the negotiating table with the Taliban.

Much discussion has rightly focused on allowing Afghani translators who assisted U.S. service members and diplomats to immigrate to America. They helped us, and we should help them. Similarly, the Hazara ardently supported U.S. efforts to create a new Afghanistan, to unwrite Taliban misrule. They invested in Afghanistan thanks to the American security blanket.

Farkhondeh and the Hazara will be a bellwether for what happens next in Afghanistan. As she said, “My future is now. My generation has been investing and preparing to serve in Afghanistan and change the country’s fate for good.”

Yet she fears “each day that ‘future’ is being taken away further from us by violence by actors of the past.” Helping the Hazara secure the future they want—a democratic, rights respecting, multiethnic country—will help Afghanistan achieve the future it so desperately needs. 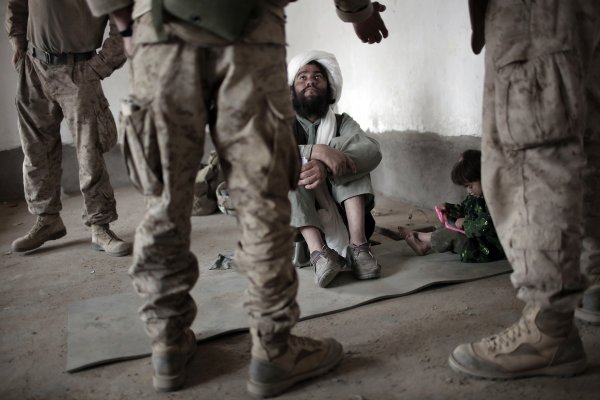 We Must Help the Afghan Interpreters Who Helped Us
Next Up: Editor's Pick