When Afghanistan’s now-deposed President Ashraf Ghani visited President Joe Biden in the White House in late June, he expressed some concerns about how the U.S. planned to evacuate people ahead of the troop withdrawal from his country.

Ghani said he worried that a planned massive airlift of U.S. citizens and Afghan nationals who had helped the U.S. would send a disheartening signal and undermine confidence in his government’s ability to fight the Taliban, according to a senior administration official familiar with the discussions.

Biden and his advisors listened, the official says, and in mid-July they decided to move ahead with civilian evacuations, but to partially obscure the beginnings of their departures by relying on commercial planes and hold off on using larger military aircraft that can hold more people at a time.

Biden’s closest advisors now acknowledge that was a mistake.

The Afghan government defenses folded quickly, allowing the Taliban to seize control of the capital on Aug. 15 during an 11 day blitz across the country. Now, the Biden Administration is rushing to airlift thousands of Americans and Afghans who aided the U.S. to safety. On Monday, Biden sent CIA Director William Burns, a veteran diplomat, to Kabul to meet secretly with Taliban leader Abdul Ghani Baradar and discuss the U.S. evacuation efforts and Biden’s intention to prevent terror cells from operating in Afghanistan after the U.S. leaves, according to a U.S. official familiar with the meeting. (The meeting was first reported by the Washington Post.)

While thousands of Americans have already left the country, the Administration hasn’t specified the number that still remain. And with Biden saying he will only extend the Aug. 31 deadline for a full withdrawal if the evacuation is not complete, they now have just seven days to get the rest of the Americans out of Afghanistan. It’s a major test for an Administration still reeling from the Taliban’s speedy takeover, and the stakes are enormous. Biden’s ham-fisted handling of the withdrawal has already undermined U.S. credibility with allies. Now, thousands of American lives could hang in the balance, and the success or failure in getting them out will shape how Biden’s presidency is remembered.

“The key right now for President Biden, in order to get beyond the chaos of the withdrawal decision, is to be able to complete the evacuation of all of the U.S. [citizens] and Afghans that we promised to evacuate,” says Leon Panetta, who served as Secretary of Defense and CIA Director under President Barack Obama. “If we fail in that commitment, I think it’ll further undercut our credibility.”

The Administration has been working overtime to ensure it doesn’t. Since August 14, 70,000 people have been evacuated from Afghanistan, Biden said on Tuesday. The Pentagon told reporters that as of August 23, 4,000 American passport holders have been evacuated. The Administration has also asked six airlines to supply 18 aircraft for additional assistance. The goal, Biden said on Aug. 20, is to ensure “any American who wants to get home will get home.”

But there are complex challenges to fulfilling that objective. The Biden Administration doesn’t know how many Americans are currently left in Afghanistan wanting to be evacuated. Americans are asked to voluntarily register their contacts and whereabouts with the U.S. embassy when they arrive in Afghanistan, but many don’t. In addition, there’s no requirement that Americans notify the embassy when they depart the country, leaving the State Department’s database clogged with contacts for Americans who may have already gotten out. “This is a dynamic number,” White House spokeswoman Jen Psaki said Tuesday about the number of Americans who need to be evacuated. “We’re working hour by hour to refine and make it precise.” The information gaps became even more apparent during the same press briefing: When asked what an American in Afghanistan should do to get to the Kabul airport safely, Psaki told a reporter to give her the person’s contact information. “If any of you are hearing from American citizens who can’t reach us, give me their contact information, and we will get in contact with them,” Psaki said.

These challenges reflect the criticism that has plagued the Biden Administration for weeks about the failure to successfully execute a U.S. withdrawal. Senior Administration officials have repeatedly said they were planning for every contingency, but they seemed to be caught flat-footed by the speed at which the country fell to the Taliban. In the days following the Taliban’s seizure of Kabul, senior Administration officials were dismayed to find that the State Department’s list of American citizens in Afghanistan was incomplete. They felt that much more needed to be done to contact Americans known to be in the country and to find Afghans who had worked with the U.S. government and had applied for Special Immigrant Visas.

Early last week, the State Department’s senior leadership scrambled to fix those shortcomings, activating staff in U.S. embassies around the world to call known phone numbers and send texts and emails to find those who needed to be evacuated. A State Department email address collected thousands of messages with names and contact information for people wanted to get out of the country. Yet even if people manage to make contact with the U.S. government, disorderly crowds at the entrance to Hamid Karzai International Airport in Kabul have made it unsafe for many Americans and Afghan visa holders to safely get to flights.

Mara Rudman, executive vice president for policy at the progressive policy institute Center for American Progress who was a national security staffer for both Obama and President Bill Clinton, said she was surprised the Biden Administration didn’t seem more prepared for the possibility of an immediate evacuation. “From my time in the White House, I would have expected pretty detailed planning memos and scenarios that backed up the options that the President has in front of him to choose,” she says. “He may have had that. It doesn’t feel like that from what we’ve been seeing in the last couple of weeks.”

Similar criticism is coming from both Biden’s allies and foes, and historians think it could mar his presidency, challenging the image he has projected of a competent, experienced statesman. Which is why the final days until Aug. 31 will be crucial. “The verdict on his approach to Afghanistan rests on how many Americans and Afghan allies he gets out, and on whether all Americans are evacuated to safety,” says Timothy Naftali, a historian at New York University.

The situation in Afghanistan is already drawing comparisons to the fall of Saigon. Biden’s decision to not use military planes to speed up the evacuation in mid-July echoed similar decisions made by President Gerald Ford while he was orchestrating the U.S. departure from Saigon in April 1975. The Ford Administration had intelligence that Saigon would collapse after the U.S. departure, and the Ford White House slowed the evacuation because officials thought moving too fast would signal weakness and doom the South Vietnamese government, Naftali says. As a young senator on the Senate Foreign Relations Committee, Biden followed the botched Saigon departure as it unfolded and was in the Oval Office, along with fellow members of the foreign relations committee and then-Secretary of State Henry Kissinger, when Ford asked for funding to get Americans and Vietnamese allies out. At the time, Biden was concerned funding a large operation that included airlifting some 174,000 Vietnamese nationals who had aided the U.S. would extend the U.S. troop presence in Vietnam, according to a White House memorandum of the meeting.

Now it’s Biden’s turn behind the Oval Office desk, facing the tough decisions and unable to sidestep the fallout. (Though he will try: When he appeared in the Roosevelt Room on Tuesday to address the U.S. evacuation in Kabul, Biden spent the first 10 minutes of his 18-minute remarks thanking House Democrats for moving forward with a broad infrastructure bill and laying out how such investments could stimulate the economy, address climate change and bolster the middle class.)

Biden wants the operation in Afghanistan to end as soon as possible. The longer U.S. troops are in Kabul, he said, the longer they have to face an increasing risk from the terror group ISIS-K—an enemy of the U.S. and Taliban—that may try to launch attacks to destabilize the country further. “It’s a tenuous situation,” Biden said. “We run a serious risk of it breaking down as time goes on.” 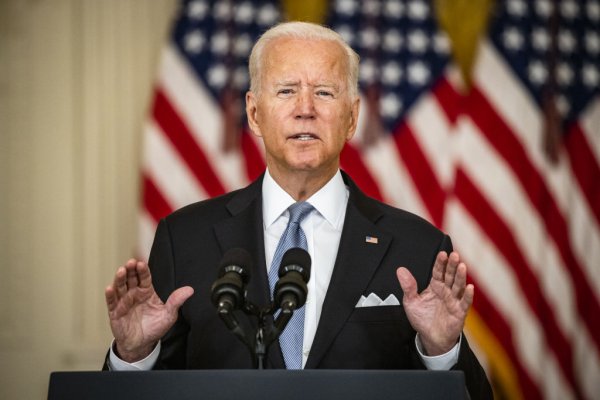 Leaving Afghanistan Was the Right Call, But May Haunt Biden
Next Up: Editor's Pick