A woman receives a dose of a COVID-19 vaccine at a newly opened vaccination hub on August 21, 2021 in Dubbo, Australia. Lockdown restrictions remain in place across regional New South Wales as health authorities work to contain COVID-19 case numbers, as concerns grow of the coronavirus spreading to vulnerable Indigenous communities.
Belinda Soole–Getty Images
By Amy Gunia

It’s not easy to get to Goodooga. The tiny Australian town is about a nine hour drive from Sydney, and miles from the closest two-lane highway. But that didn’t stop COVID-19 from reaching the predominantly Aboriginal community of about 250. Last week, the town confirmed its first two cases of the coronavirus. Several more people have been confirmed to be infected since.

“It’s a really small community, and a lot of chronic health conditions make the community quite vulnerable,” Bhiamie Williamson, who lives in Goodooga with his family, tells TIME. “So we’re obviously very nervous and anxious about what’s going on at the moment.”

Outbreaks in Goodooga and other small Aboriginal-majority communities across Australia have highlighted just how unprotected the country is when it comes to COVID-19.

Australia successfully used contact tracing, lockdowns and some of the world’s strictest border policies to maintain a “zero-COVID” strategy that allowed people to live mostly in an alternative, coronavirus-free world for much of the last 20 months. But a surge of the Delta variant that began in June has forced Sydney, Melbourne and Canberra—and much of the surrounding areas—into lockdown as daily cases numbers hit record highs, albeit at rates that are a fraction of those seen in the U.S. or Europe.

The outbreak has shattered Australia’s approach to COVID-19, and drawn attention to the government’s failure to vaccinate its citizens before it was too late—especially its most vulnerable.

The country badly lags the developed world in rolling out vaccines, with just 24% of the population fully vaccinated—compared to 43% in Japan, which began vaccinations around the same time.

In Goodooga, residents were able to access vaccines for the first time just last week when a vaccine popup opened in the local park, says Williamson. Before that, the only option to get vaccinated was driving five to six hours to a regional health center, where supply hasn’t been able to keep up with demand.

“It’s been really difficult… almost impossible for people to get vaccinated out here,” says Williamson. “That’s made people quite angry because, you know, Aboriginal people were one of the highest priority to get vaccinated in Australia and it has not eventuated that way.”

Like many Indigenous groups around the world, Aboriginal people are more vulnerable to COVID-19, owing to a higher rate of other health issues and the difficulty of accessing medical care in the remote areas where many communities are located.

Aboriginal leaders have been warning since the start of the pandemic that if COVID-19 got into their communities, it would be devastating. Pat Turner, the chief executive of the National Aboriginal Community Controlled Health Organization (NACCHO) told the Australian Broadcasting Corporation in March 2020: “I can’t be any blunter. If COVID-19 gets into our communities we are gone.”

In the last few weeks, dozens of cases have been reported in remote towns across New South Wales—the state that includes Sydney, but also great expanses of sparsely populated bushland. With the virus spreading rapidly through Indigenous communities, many are angry that the government did not do more to protect people.

“People are scared of the health crisis here,” says Williamson, an Indigenous studies researcher and Ph.D. candidate at the Australian National University, “but people are equally angry at the complete failure of multiple tiers of government to make our community safe.”

Read More: After Australia Banned Its Citizens in India From Coming Home, Many Ask: Who Is Really Australian?

Now many of the impacted towns are struggling to cope. Medical services in these places are usually limited, with intensive care units sometimes hours away. Overcrowded housing is an issue in many Aboriginal communities, with several generations often living in one home.

A kangaroo drinks from a hose at Wilcannia Hospital on March 04, 2019 in Wilcannia, Australia.
Jenny Evans—Getty Images

In Wilcannia, 600 miles inland from Sydney, more than 40 cases have been confirmed in the town of about 500 residents. There are at least six households in the town with more than 10 people living under the one roof, according to the Guardian. That makes isolation impossible for those who have tested positive, and gives the coronavirus ample opportunity to run rampant through families. Some in the town have been sleeping in tents in an attempt to isolate. “We have been crying out for years to build more housing here,” says Monica Kerwin Whyman, who lives in Wilcannia. “Every cry that we’ve put out to the government fell on deaf ears.”

A race to vaccinate

But that hasn’t translated to a high level of vaccinations. In western New South Wales, where COVID-19 is now hitting Aboriginal communities, less than 20% of the Aboriginal population over the age of 16 had one dose, and only about 8% of Aboriginal people were fully vaccinated as of mid-August.

Ken Wyatt, the minister for Indigenous Australians, says the low vaccination rates among Aboriginal people is partly due to “choice.” But experts and Aboriginal people interviewed by TIME say the government has failed to reach out to Indigenous communities with culturally appropriate education campaigns. They also cite online misinformation, a lack of trust in the government and mixed messaging over the safety of the AstraZeneca vaccine.

The latest outbreak has spurred the government to action, and New South Wales’ vaccination rate has surged since June to become one of the fastest in the world. In western New South Wales, local health authorities have stepped up testing and vaccination efforts, and members of the Australian military have been deployed to help get vaccination rates up.

For many residents, it’s about time. Some 160 people in Goodooga—nearly two-thirds of the town—received a vaccine when health workers arrived with vaccines last week.

“People have been sitting here waiting for six months for vaccinations to be organized to come here,” says Williamson.

He just hopes the shots haven’t come too late. “People here are genuinely scared about what could happen,” he says. 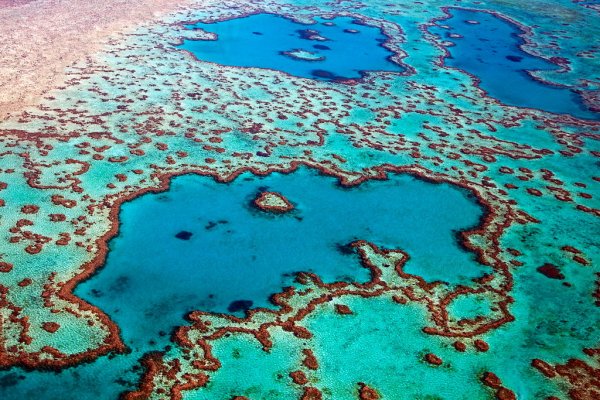 The Politics of Preserving Australia's Great Barrier Reef
Next Up: Editor's Pick