Tony Fontes first went scuba diving at the Great Barrier Reef in 1979 on a trip to Australia. Fontes, a native Californian, was so entranced that he decided to stay and work as a dive instructor at Airlie Beach, a coastal resort town in Queensland that serves as a gateway to the reef.

“The marine life and the quality of coral was unmatched,” he says, “and the clarity of the water was a diver’s dream come true—and that’s what sticks with me.”

But over the last four decades, the 68-year-old has watched the health of the reef decline. So on Friday, when the U.N. Educational, Scientific and Cultural Organization (UNESCO) committee decided to delay a decision to label the reef “in danger”—following an intensive lobbying effort by the Australian government—Fontes was both surprised and disappointed.

“I thought at last this is going to get the attention of people both within and outside Australia and the reef will get the kind of protection it needs,” he says.

Stretching some 1,420 miles along northeast coast of Australia, the reef is the world’s largest coral reef ecosystem and can be seen from space. UNESCO first warned in 2014 that an “in danger” listing was being considered for it. A conservation plan bought the Australian government some time, but improvements in the reef’s health haven’t come quick enough. On June 21, the U.N. body recommended that the Great Barrier Reef be placed on a list of World Heritage sites that are “in danger,” citing climate change as “the most serious threat” to the site.

The move prompted a fierce backlash from the Australian government. The reef is one of the country’s top tourist spots; it attracted almost three million visitors a year before Australia closed its borders due to the pandemic, bringing in billions of tourism dollars and creating tens of thousands of jobs. That isn’t likely to return in a post-pandemic world if the reef is a protected site.

“This draft recommendation has been made without examining the reef first hand, and without the latest information,” Sussan Ley, Australia’s minister for the environment, said in a June 22 statement. She noted an investment of $3 billion Australian dollars (about $2.2 billion U.S. dollars) in reef protection.

Read More: Australia Is Investing $379 Million in an Effort to Save the Great Barrier Reef

Days later, UNESCO defended its announcement. “It is really a call for action,” Mechtild Rössler, director of UNESCO’s World Heritage Centre in Paris, told media during an online briefing. “The whole world needs to know there’s a site that’s under threat and we all have a duty to preserve [it] for generations to come.”

Following UNESCO’s notice, Ley embarked on an 8-day lobbying trip to Europe, where she met representatives of 18 countries and won her government a reprieve. On July 23, the 21-country World Heritage Committee agreed to delay the decision, and instead asked Australia to deliver a report on the state of the reef in Feb. 2022 for reconsideration.

‘Climate change is the biggest threat’

The delay has been decried by some environmentalists and scientists, who have been warning of the danger that climate change poses to the reef for years.

“Many of us were hoping for that decision to be made to draw even more international attention, both to the plight of the reef and to the Australian government’s failure to have decent climate policy,” says Lesley Hughes, a professor of biology at Sydney’s Macquarie University and a member of the Climate Council.

In early July, several top scientists wrote a letter to UNESCO supporting the decision to list the reef as “in danger” in part because Australia “has so far not pulled its weight” in the global effort to reduce carbon emissions.

The Australian government has faced criticism for dragging its feet on climate change—even as wildfires exacerbated by global warming scorched an area twice the size of Florida in apocalyptic blazes during late 2019 and early 2020.

Prime Minister Scott Morrison has argued that Australia, which generates about 1.3% of global emissions, can’t do anything to solve the problem because Australia’s greenhouse-gas emissions make up only a small share of the global total. But that ignores the fact that Australia is one of the world’s leading exporters of coal. Accounting for fossil fuel exports increases the country’s footprint to about 5% of global emissions, equivalent to the world’s fifth largest emitter, according to Climate Analytics, an advocacy group that tracks climate data.

A boat launches a sail in protest to the Adani Carmichael Coal Mine proposal in Airlie Beach, Australia on April 26, 2019.
Lisa Maree Williams—Getty Images

A study released in 2020 by marine scientists at the ARC Centre of Excellence for Coral Reef Studies in Queensland found that the Great Barrier Reef has lost more than 50% of its corals since 1995 as the result of warmer water driven by climate change. It experienced three mass bleaching events in the last five years, leading to sharp declines in coral populations. (The bleaching phenomenon occurs when corals are stressed by changes in conditions.)

Fontes has spent the last 40 years guiding divers around the Great Barrier Reef and has seen the change first-hand. “Your favorite dive site—a part of it dies. You move to another dive site, and maybe some of that dies. That’s what’s been happening up and down the reef,” he says.

Hughes, of the Climate Council, says the government is making strides in things like improving water quality, but it is not addressing the most significant threat to the reef’s future. “Climate change is the biggest threat facing the reef,” she says, “and what the government is not doing is much to face or deal with that threat.”

Emma Camp, a marine biogeochemist at the University of Technology Sydney, is studying corals that might be able to survive in warmer, more acidic water. She says work like hers might buy the reef time while climate change is addressed, but collective action needs to be taken to reduce the world’s reliance on fossil fuels.

“The bottom line is that we fundamentally have to address carbon emissions to ensure a future for reefs,” says Camp, who was also one of TIME’s Next Generation’s Leaders in 2020.

With a report on its progress in protecting the reef due in February, it may only be a matter of time until Australia has to take greater action on climate change—that’s if it doesn’t want to see one of its most famed tourist spots placed on the danger list.

Fontes says that he hopes action is taken quickly to save the reef that’s played such an important role in his life.

“To me it’s still the most incredible reef on the planet, but it’s in serious trouble,” he says. “We need to take action now, while there’s still a reef to save” 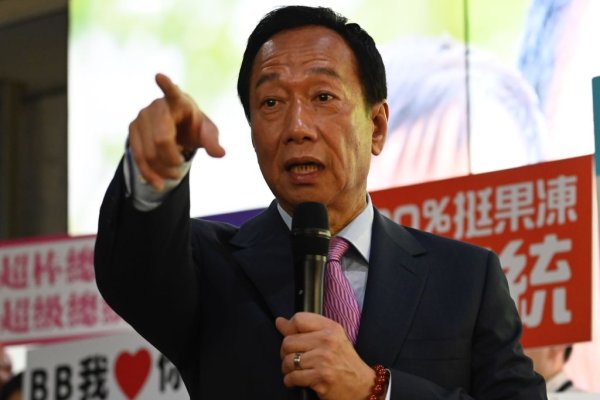 Will a Vaccine Deal Bring Taiwan Closer to China?
Next Up: Editor's Pick