This Was No Team USA Men's Basketball Dream Team. But In Tokyo, It Demands Our Respect

It was no thing of overwhelming beauty, the Team USA men’s Olympic basketball team’s 87-82 win over France in the gold medal game on Saturday in Saitama, north of Tokyo. This was no Dream Team or Redeem Team or any other collection of superstars who will be wistfully remembered in books or documentaries three decades from now.

They didn’t have to be. At an Olympics that at times have felt like more of an obligation than a celebration, the U.S. men’s basketball team met the moment. They did what they had to do. They got it done.

So they deserve our everlasting respect.

Kevin Durant, America’s all-time Olympic scorer, scored 29 points on 9-18 shooting, and Jrue Holiday of the Milwaukee Bucks, the newly-minted NBA champion who along with Bucks teammate Khris Middleton and fellow NBA Finals participant Devin Booker of the Phoenix Suns landed in Tokyo at 1 a.m. the morning their first Olympic game, set a defensive tone that was key to the U.S. victory over France, which beat the U.S in the Olympic opener for both teams. After that loss, and demoralizing pre-Games exhibition losses to Nigeria and Australia that caused some panic in basketball circles, the Americans defended their gold, again: following a bronze medal finish at the 2004 Athens Games that sparked a revamping of the U.S. Olympic team selection process, the U.S. men have now won the past four Olympic gold medals—and maintains its status as world’s most formidable hoops power.

After the loss to France, the U.S. held a players-only meeting. “Pop wasn’t there,” Durant said after the gold-medal win, his coach, Gregg Popovich of the San Antonio Spurs, sitting on a dais right next to him. “When you have a team meeting, you’re kind of at the bottom.” Thanks in large part to Durant, who unlike most of his superstar brethren chose not to bail on Tokyo, the U.S. rose from those ashes. “A lot of people back home doubted us,” said Durant. “A lot of people said that it was going to be tough for us to win. They really don’t matter. But you hear the noise so much.”

Ultimately, the chirping served as motivation. From the outset, France had a clear strategy: toss the ball down-low to big-man Rudy Gobert, of the Utah Jazz, whenever the relatively slender Durant was guarding him, or when a smaller player switched to defend Gobert. The plan was far from aesthetically pleasing—there’s likely a reason that a pass into the post is often termed a “dump-down”—and flies in the face of in-vogue basketball tactics, which call for spacing and fast pace and lots of three-point shots.

But basketball’s no beauty competition. Gobert finished with 16 points and shot a perfect 5-5 from the field. But he also missed 7 of his 13 free throws: after the game, he admitted he’ll dwell on that failure a bit. And a few times, Holiday, who’s 10 inches shorter than the 7’1″ Gobert, bothered Gobert down low or poked it out of Gobert’s hands. His refusal to back down set a tone.

“This man is a super-champion,” said Jason Tatum of the Boston Celtics, Team USA’s second-leading scorer in the gold medal game with 19 points, putting a hand on Holiday’s shoulder. Holiday and Middleton are the fifth and sixth players ever to win an NBA title and gold medal in the same year; Michael Jordan (1992), Scottie Pippen (1992 and 1996), LeBron James (2012) and Kyrie Irving (2016) are the others.

But none of these players landed in the Olympic host city at 1 a.m. the day of a game. Between celebrating his ‘92 title with the Bulls and the start of the Barcelona Games, Jordan, Holiday pointed out, “had some time.”

Holiday, says teammate Draymond Green, “is probably the best on-ball defender the NBA has to offer. Him coming to this team, keeping his commitment, is one of the main reasons we’re sitting here as gold medalists.”

While Holiday set the defensive tone, Durant anchored the U.S. offense. Both teams did shoot—and miss—plenty of threes; the U.S. started a cool 0-8 before Durant ended that atrocious streak, and as a team finished 9-32 for the game; France went 10-31 from downtown, and bricked or air-balled three shots late that could have threatened Team USA’s lead even more (Holiday also helped hold France’s Evan Fournier, who scored 27 points in France’s pool-play victory over the U.S., to 5-15 shooting, and 2 for 9—including the late brick from Steph Curry range—from deep).

Durant did not enjoy his best long-range shooting game; he was 3-9 from three. But he delivered when needed. Durant scored 21 points in the first half alone; the U.S had a 44-39 lead at the half, and went up by as much as 14 points, 71-57, late in the third quarter, before France chipped away. France cut the deficit to three, 85-82, with 10 seconds left in the game; Durant was fouled and converted both free throws to clinch it.

All game long, Durant unleashed his usual array of drives to the hoops and silky pull-up jump shots. In the third quarter, he faced up against Gobert, and calmly drilled a three-pointer in his face, as if the reigning defensive player of the year wasn’t even there. Also in the third, he rose for a monster dunk on Gobert—and drew a foul. “We tried to make things really tough for him,” says Gobert. “We tried to make him work as hard as he can. But he’s Kevin Durant.”

At times, Durant’s own teammates can’t help but gawk. “It’s hard not to watch him,” says Damian Lillard. ”When you’re on the floor with him, Pop’s like don’t stand around, cut, move. But you see some of the stuff he’s doing out there, and it’s hard not to, literally, watch him.”

Durant has his haters: he can be insecure on social media, and some fans will never forgive him for jumping at the chance to sign with the Golden State Warriors after that team won a record 73-games in 2016; two titles followed the Warriors and Durant. But if these Olympics don’t win KD converts, nothing will.

USA Basketball managing director Jerry Colangelo, the architect of the last four gold-winning U.S. men’s Olympic teams, teared up after the game when discussing Durant’s sacrifices to play in three straight Olympics—especially these ones. “KD is not special because he’s so talented,” says Popovich, who’s won five NBA titles as long-time coach of the Spurs. “The way he works on his game is more impressive. The relationships he builds with his teammates, the respect he garners, the joy he has in playing, it’s like osmosis. It goes into all the other players, and allows you to develop camaraderie.

After it was over, Durant and Green, the multiple gold medalists, led the on-court celebrations, draping the U.S. flag on their shoulders, hugging and hopping around with their teammates. Don’t put it past Durant, who’s 32, to return to the Games in three years, in Paris. More of the bigger U.S. names might commit; France could be a more compelling locale than Tokyo, especially if COVID-19 is behind us.

But no matter, the Tokyo team has secured its place. These players, as a whole, may have lacked glitz. They were far from the perfect team. But, as Durant put it, “we came together to finish it off. It was the perfect ending.” 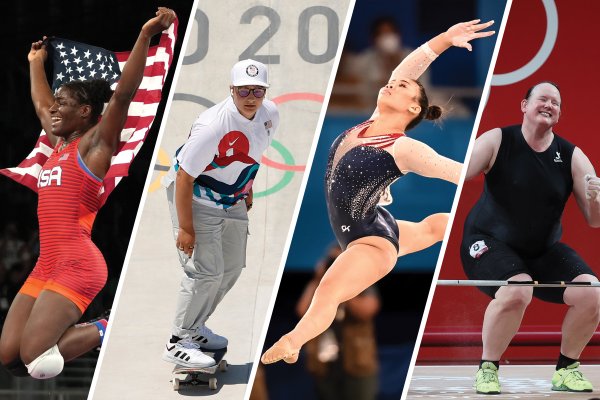 These Athletes Made History at the Tokyo Olympics
Next Up: Editor's Pick