Other NBA Superstars Ditched the Olympics. Kevin Durant Showed Up, and He's Keeping Team USA on Track for the Gold

Team USA's Kevin Durant looks for pass during the men's quarter-final basketball match between Spain and USA of the Tokyo 2020 Olympic Games at the Saitama Super Arena in Saitama on August 3, 2021.
Aris Messinis–AFP/Getty Images
By Sean Gregory/Tokyo

Kevin Durant takes his fair share of flack. There’s his insecurity on social media. His decision to join the 72-win Golden State Warriors, as a free agent, back in 2016, in order to chase championships. (He won two.) Many hoops fans will never let him live that one down. Sure, he’s a beautiful scorer. But he’ll never be as all-around great as LeBron James.

Enough. After the Tokyo Summer Olympics, we might just have to give Durant proper credit for serving his country so well. Team USA beat Spain, 95-81, on Tuesday in the quarterfinals of the Olympic men’s basketball tournament at the Saitama Super Arena in Tokyo.

Durant, who in a preliminary round game against the Czech Republic became Team USA’s all-time Olympic scorer, finished with 29 points to lead the team into Thursday’s semifinals, where the U.S. will meet the winner of the Argentina-Australia quarterfinal.

If any superstar had a right to ditch the Tokyo Olympics—like LeBron and Stephen Curry and so many others did—it was Durant. During this NBA season, his first in uniform with the Brooklyn Nets, he was coming off an Achilles injury in the 2019 NBA Finals that kept him out of the entire 2020 NBA season.

He missed 37 out of 72 regular season games this year due to injuries and COVID-19-related issues. In the NBA playoffs in June, he scored 48 points and played all 53 minutes in a Game 7 overtime loss to the eventual-champion Milwaukee Bucks.

In an era where “load management”—basically, resting and resting and resting—is in vogue, staying home for the Tokyo Olympics would have been the safest of bets for Durant. He’s already won two Olympic gold medals to go with the NBA titles. And given the long haul, time-zone changes and onerous restrictions on movement and activities due to COVID-19, no reasonable person could have blamed the 32-year-old star one bit for taking a pass.

But he’s here. And he’s a key reason the U.S. will continue its quest for a fourth-straight gold medal in men’s basketball. Spain took an 11-point lead, 40-29, against the U.S. in the first half. Spain point guard Ricky Rubio, who as an NBA point guard is much more of a threat to pass than score, accounted for 13 of Spain’s first 17 points; he finished with 38.

Spain was both bullying Team USA down low and asserting itself on defense. The Americans rallied to tie the game at 43-43 at the half, but Spain—the No. 2-ranked hoops team in the world—was always going to be a test. Spain made the gold medal game at the 2008 and 2012 Games, finishing with silver behind the United States both times.

It’s a group with players like Rubio and the Gasol brothers (Marc and Pau) who have gelled as a unit together forever. Spain out-rebounded the U.S. in the first half, 29-18, and blocked six shots. Team USA swatted away none.

But since Durant is here, Spain’s first-half physicality ultimately didn’t matter. Durant banged his threes, shooting 4-7 for the game. He drove to the right baseline and nailed one of his signature mid-range shots. We’ve seen him do this sort of thing for years in the NBA. Durant’s economy of movement and pure scoring efficiency—he shot 10-for-17 against Spain—will always be something to behold.

Spain kept the game relatively tight down the stretch, but the Americans were never in danger late. Durant, who talks repeatedly how much he just loves to play basketball, showed up here at the Olympics. So the U.S. plays on.

No matter how this tournament ends, Durant deserves a hearty salute. 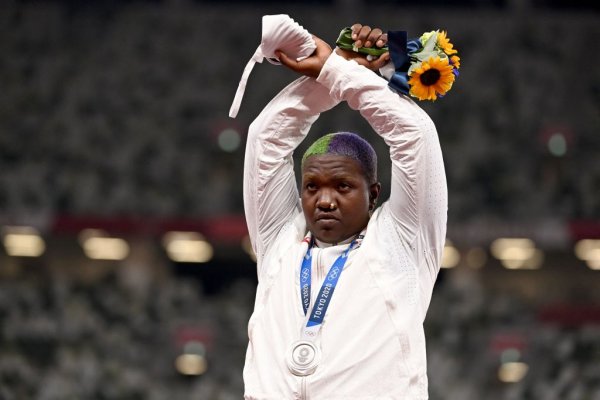 Team USA Athletes Are Protesting at the Tokyo Olympics
Next Up: Editor's Pick