Why Can the Utah Jazz Get Coronavirus Testing, But I Can't?

On Tuesday, March 17 the Brooklyn Nets reported that four of the team’s players had been diagnosed with COVID-19: Kevin Durant was one of them. (He said he’s doing fine). Most Los Angeles Lakers players were reportedly tested for COVID-19 on Wednesday. The traveling party for the Toronto Raptors was tested last week: the results came up negative. Also last week, Utah Jazz All-Star Rudy Gobert received a positive diagnosis in Oklahoma City: Oklahoma health officials then scrambled to test 58 Utah players, coaches, staff and associates at the Chesapeake Energy Arena, where the Oklahoma City Thunder play home games. A second All-Star, Utah guard Donavan Mitchell, also tested positive for COVID-19.

Under normal circumstances, news of Americans—professional athletes or otherwise—getting tested for an infectious disease would not be cause for outrage. But during this global pandemic, the U.S. is faced with a shortage of testing kits for COVID-19. Even many health care workers, tasked with treating sick patients on the front lines and doing what they can to halt the spread of the disease, don’t have ready access to coronavirus testing.

So it’s only natural to wonder why professional sports teams seem to have easier access to testing than the general population. It’s only fair to ask, how come the Utah Jazz can get tested for COVID-19, but I can’t?

New York City mayor Bill de Blasio tapped into this dissatisfaction upon reacting to the news about the Nets players. “We wish them a speedy recovery,” de Blasio wrote on Twitter. “But, with all due respect, an entire NBA team should NOT get tested for COVID-19 while there are critically ill patients waiting to be tested. Tests should be not for the wealthy, but for the sick.” (According to sources, the Nets paid a private company for the testing).

A Oklahoma State Department of Health spokesperson told TIME that the Jazz players and supporters were tested as a precaution, since they had been in close proximity to a player with a confirmed infection. Isolating positive cases could help halt the spread of disease. On Tuesday, doctors at the OU Medical Center in Oklahoma City gave a COVID-19 briefing; there are now 29 positive cases in the state. “It’s very important to get testing, that we have the ability to test large numbers of people,” said Dr. Douglas Drevets, chief of infectious diseases at the University of Oklahoma Health Sciences Center.

I reached out to Dr. Drevets with an interview request. Drevets wrote an email to an OU Medicine publicist about the request: I was copied on the correspondence, presumably unintentionally. “I am concerned that what he wants to talk about is the thunder situation,” Drevets wrote. “[Where] NBA players got tested with a shortage of tests in the community. Please work through that issue first. Otherwise I’m available.” When I asked the publicist why it would be “concerning” for the chief of infectious diseases at the University of Oklahoma Health Sciences Center, who has talked about the need for widespread testing, to discuss whether testing the Utah players was a proper use of scarce resources, she replied via email: “As University of Oklahoma employees, our faculty and staff are not allowed to give opinions on medical issues. We may discuss matter of factly what the protocols are for testing and what testing involves, if you would like to discuss that. We will not discuss if something was a wise use of resources or not.”

Through the spokesperson, Drevets declined the interview request.

To be sure, disease experts and health care economists point out the benefits of testing professional athletes, especially NBA players. “The best use of a limited number of tests is to prevent ‘super-spreaders,’ people who because of their job are likely to spread the virus widely,” says Alex Tabarrock, economics professor at George Mason University. “Since basketball players are in close physical contact with one another and the players are spread over the entire United States it was a good decision to test NBA players. Once one test came back positive it was imperative to test other players.

The NBA tests have had a welcome if unintended consequence. “By shutting down the NBA, thousands of fans were not crowded into arenas where players and almost certainly other fans were infected,” says Tabarrock.

The decision also had a stunning ripple effect throughout sports—the NCAA’s March Madness basketball tournament was soon cancelled, Major League Baseball and the National Hockey League suspended their seasons, the Masters golf tournament was postponed—and society. “There likely was some societal benefit with major organizations moving quickly to mandate physical distancing because these diagnoses were in people who who are household names,” says Dr. Kevin Volpp, director the University of Pennsylvania’s Center for Health Incentives & Behavioral Economics. “One of our big challenges as a society right now is getting people to take physical distancing seriously. If it were not for Rudy Gobert getting tested, a lot of the very important physical distancing initiatives in the last week may not have happened. To avoid the type of situation Italy is in, with their health system being completely overloaded, moving quickly on these initiatives has been extremely important.”

COVID-19, however, has rapidly moved into a new phase. Those 58 tests for the Jazz traveling party did carry an opportunity cost: an asymptomatic Oklahoma City Uber driver, for example, who might be unknowingly be carrying COVID-19, and in close physical proximity with many people, could have potentially benefitted from that 58th test used on someone in the Utah Jazz universe. And with social distancing now the norm, tests for asymptomatic young NBA players carry less urgency than those for at-risk patients showing COVID-19 symptoms like a fever. Even if that player unknowingly has COVID-19, he should be isolated anyhow and halting the spread on his own.

With scarce testing available, imperfect testing prioritizing is now necessary. And asymptomatic NBA players can safely move to the back of the line now that the season has been paused. Volpp offers a rough blueprint: First priority goes to hospitalized patients showing symptoms. Second goes to health care workers who may have been exposed to COVID-19. Third are symptomatic individuals, especially older adults and people at risk of getting sick quickly, such as oncology patients. The final group is very much in flux; it can be symptomatic people with known contact to COVID-19, or people with symptoms in places with the highest rates of COVID-19 diagnoses.

“Let’s just hope that soon enough there’s testing for everyone,” says Volpp, “so we don’t need to do this kind of rationing.” 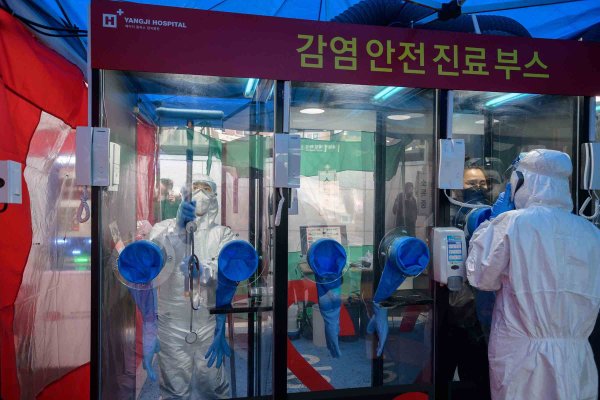 The Best Tech to Help Fight COVID-19
Next Up: Editor's Pick