Stunning defeats to Nigeria and Australia in exhibition games before the Olympics are one thing. Those losses by Team USA men’s basketball team—featuring superstars like Kevin Durant and Damian Lillard and Jason Tatum—you could somewhat shrug off. But falling to France, 83-76, in the Tokyo Olympics opener?

American basketball fans are free to freak out.

Team USA men’s national basketball team on Sunday lost in the Olympics for the first time since the disastrous 2004 Games, when Puerto Rico crushed the Americans in the opening game; Lithuania also beat the U.S. in pool play. That team—for which current Team USA coach Gregg Popovich was assistant coach—finished in third place after losing to Argentina in the semifinals. The result led to a complete overhaul of the Olympics selection process—and a trio of gold medals in Beijing, London and Rio. The question tonight, which is fair: despite being the country that still produces the best basketball players in the world, has the American Olympic basketball team hit another low point?

Evan Fournier, who played for the Orlando Magic and Boston Celtics last season and is a free agent, led France with 28 points; hitting deep three-pointers and slithering to the hoop with ease. Team USA blew a 7-point lead with just over 3 minutes remaining. With France trailing 74-73 with under a minute left, Fournier sent a deep three from the right wing, to take a 76-74 lead; then Team USA couldn’t buy a bucket. Durant, Zach LaVine and Jrue Holiday all missed open three-pointers. France made their foul shots the rest of the way.

France’s Rudy Gobert, the reigning NBA defensive player of the year, clogged the middle and shuffled for some easy dunks. At the end of the third quarter, in which France outscored Team USA 25-11 to erase a half-time deficit, Thomas Heurtel hit a last second three pointer that gave a 62-56 advantage and seemed to demoralize the Americans. The U.S. fought back in the fourth, only to let another lead slip away.

In some ways, this loss isn’t surprising; France’s roster is chock-full of NBA players like Gobert and Fournier and Nicolas Batum, and they’ve played together for on the French national team for years. The players on France’s bench were up off all their feet all night cheering; the U.S. side felt sullen. All night, it was hard to discern an appreciable talent difference between the two teams. France more than belonged.

“I don’t understand the word surprised,” Popovich said after the game. “That sort of disses the French team so to speak, as if we were supposed to beat them by 30 or something. That’s a hell of a team. With a great coaching staff and NBA players and other talented players playing in Europe who’ve been together for a long time. I don’t know why that would be a surprise. I think that’s a little bit of hubris, as if you think the Americans are supposed to just roll out the ball and win.”

America’s preparations for Tokyo have been beset by problems. Washington Wizards guard Bradley Beal, a scoring machine, tested positive for COVID-19 and couldn’t make it to Tokyo. Another player, LaVine, had been placed COVID-19 protocols in the tune-up for Tokyo. Kevin Love backed out. Team USA had to scramble for replacements; Keldon Johnson of the Spurs didn’t look like he belonged out there.

Three Team USA players—Holiday, Devin Booker and Khris Middleton—played fresh off a 14-hour flight to Japan after completing a six-game NBA Finals series. It’s difficult to just drop into a national team at the last second, across all those time zones, and expect players to magically gel. On Sunday the trio shot a combined 6-21 from the field.

“They need to work on their chemistry,” said France’s Moustapha Fall after the game.

There’s plenty of time for Team USA to course correct in pool play: with wins in upcoming games against Iran and the Czech Republic, the Americans will make the knockout round and get their shot at gold. And this loss was different than that night in Athens in 2004, when tiny Puerto Rico humiliated the Americans in a blowout, 92-73. Here, the Americans fought and lost a tight game to better team. But going into the opener Sunday night, Team USA had enjoyed a 25-game Olympic winning streak. That’s over. As is America’s overwhelming confidence that names like Durant, Lillard, and Tatum will just roll to Olympic gold. 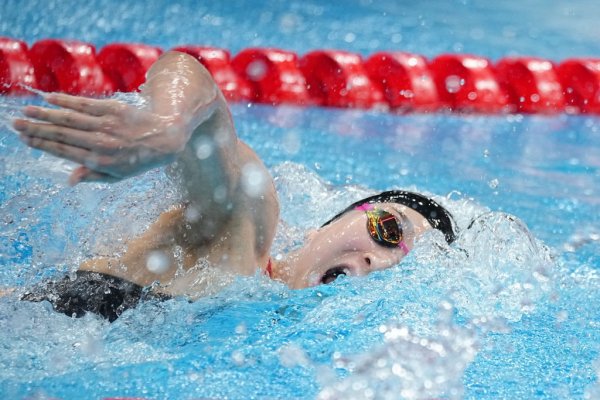