Many of the best sprinters seem to channel the pre-game smack talk of boxers, shouting to high heavens that their opponents are going down. Noah Lyles, the defending 200-m world champion who at the 2021 U.S. Track and Field Trails ran the fastest time—19.74 seconds—in the world this year, is cut from that cloth. Are you going to win in Tokyo, I ask him in a recent telephone interview. (The 200-m final is on Aug. 4). “Oh of course,” Lyles replies. Does he want to formally guarantee it? “Oh, I’m going to win in Tokyo,” Lyles says. “I just know. There are some people who just know they’re going to win. And I’m one of those people.”

Lyles’ Usain Boltian-swagger, however, masks a mental health struggle more common to elite athletes than what once was thought. As a kid, he struggled with self-esteem, while have difficulties in school and coping with asthma. More recently, the combination of the COVID-19 pandemic and murder of George Floyd left Lyles, 24, in a dark place: last August he shared, on social media, that he was taking an anti-depressant, calling it “one of the best decisions I’ve made in awhile. Since then I have been a while. Since then I have been able to think without the dark undertone in mind of nothing matters.”

Not that things got much easier in 2021, as news events continued to cause stress. “It was a longer process than I thought,” Lyles said of his recent mental health battle. “It wasn’t just, O.K., I’m on medication, everything is going to be fine. Just dealing with mental aspect of, O.K., do I come off the medication while these killings are still happening? ‘Oh, look, they’re storming the Capitol. That’s crazy. Not shocking, but crazy. It’s all just things adding on top of that. Just because you do one thing, it doesn’t mean you change everything. Just because you got through the thick of it, doesn’t mean that you got through all of it.”

When athletes like Lyles share their stories, they contribute to a larger, ongoing conversation about destigmatizing mental illness. “Everyone’s mental health journey is different,” says Lyles. “I speak out on taking medication. But you don’t have to take medication. If you feel you can go to therapy and get this out, cool. Or you have other therapeutic ways that work, that’s cool. Saying you’re confiding in a friend, that’s cool. But that’s not medical help. Yeah, it’s cool to have that but they’re not a therapist. They’re not licensed. And be honest with yourself. If you think you need help, go out and get help.”

When Lyles was in middle school in North Carolina, he says girls in particular bullied him about his yellowing teeth, a side-effect of ADD medication. The teasing, which hurt Lyles’ self-esteem, still leaves scars. “I knew it was something I was going to have to deal with for the rest of my life,” he says. “But I didn’t want that to be something that controlled my life.”

“You were just good,” Lyles says. “And I knew I was good. And then I was like, I’m just going to keep going. Then I started noticing I was getting better and better and I was like, ‘all right, now I want to pair this up with getting some massage therapists, a right coach, a chiropractor, mental health.’ And I’m just like, ‘Oh my gosh, I’m creating the ultimate superstorm. I am the force to be reckoned with.’ And every time I think about that, it’s like, there’s nobody that’s going to beat me. I am the best.”

Lyles turned pro after high school and although he didn’t make Team USA in Rio, he set a high school record in the 200 m at the Olympics trials, where he finished fourth. Lyles went off the anti-depressant medication a few months before this year’s trials: he felt it was leaving him with too little adrenaline to compete. Coming into this year’s trials, his coach told him to think aggressively; Lyles, however, didn’t win any of his 200-m heats in trials, leaving track fans to wonder if anything was wrong.

Lyles changed his mindset for the final. “Just being happy that we’re out there—I started thinking more like that,” Lyles says. “And I could almost feel my body release. Instead being wound up and tight.” In Tokyo, he’ll keep that loose thinking going.

Since Bolt left track and field in 2017, the sport has been searching for a so-called “face.” Lyles is often seen as a potential heir apparent. “Sometimes that’s really cool to hear,” says Lyles. “And then sometimes it’s O.K., calm down. I’m just trying to run.” And win. He’s already guaranteed it in Tokyo. 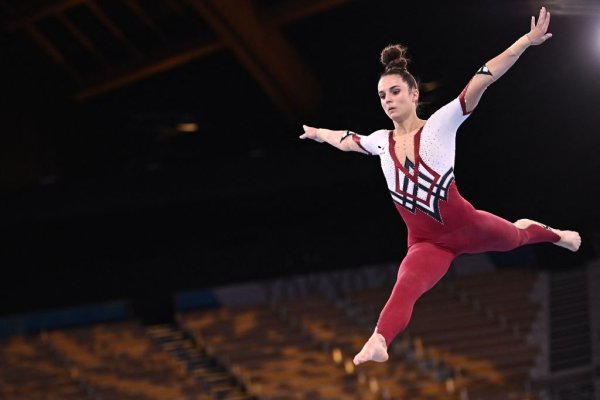 German Gymnasts Opt for Full-Length Bodysuits During Olympics
Next Up: Editor's Pick