Andre de Grasse of Canada won the 200-m gold medal at the Tokyo Olympics on Wednesday night, finishing the race with a time of 19.62 seconds. Team USA’s Kenneth Bednarek won the silver, in 19.68 seconds. Favorite Noah Lyles of Team USA, the defending world champion in the event, took home a bronze, in 19.74 seconds.

The win gives de Grasse his fifth Olympic medal and his first gold. On Sunday he won bronze in the 100-m. He’s the first man not named Usain Bolt to win this race since 2004, when Shawn Crawford of the USA finished first in Athens.

At an Olympic Games in which mental health has taken center stage, Lyles is another athlete who’s shared his struggles, in hopes of uplifting others. Last August, Lyles told his Twitter followers that he had started taking an antidepressant medication. “That was one of the best decisions I have made in a while. Since then I have been able to think without the dark undertone in mind of nothing matters.”

In 2020, the onset of the pandemic and the killing of George Floyd brought on mental challenges. This year caused more worry. “It was a longer process than I thought,” Lyles said of his mental health battle. “It wasn’t just, O.K., I’m on medication, everything is going to be fine. Just dealing with mental aspect of, O.K., do I come off the medication while these killings are still happening? ‘Oh, look, they’re storming the Capitol. That’s crazy. Not shocking, but crazy. It’s all just things adding on top of that. Just because you do one thing, it doesn’t mean you change everything. Just because you got through the thick of it, doesn’t mean that you got through all of it.” Lyles says he started seeing therapists when he was 13, and was bullied in middle school. He’s also struggled with asthma and ADD.

And now he’s an Olympic medalist, though the color—bronze—is unexpected. Lyles had slowed up in his semifinal heat on Tuesday, finishing third and failing to automatically qualify for the final. But he owned one of the two fastest times out of sprinters who didn’t finish in the top two spots in their heats. He wasn’t too worried, however, about dodging a potentially epic mistake. “I knew I was going to make it,” says Lyles. “I just do.”

His decisions cost him one of the middle lane positions preferred by many sprinters. Again, he was nonplussed. “If you’re fast,” Lyles says, “you’re fast.”

But not as fast as de Grasse. It was Canada’s night at the races. 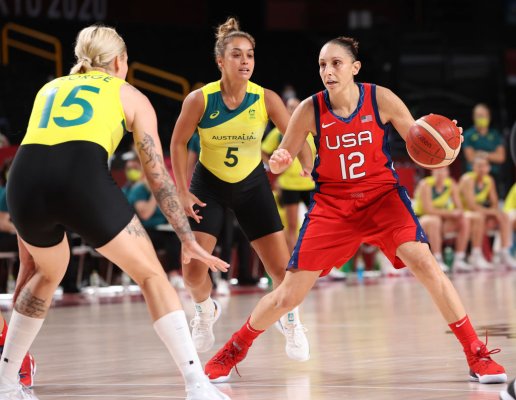 U.S. Wallops Australia in Women's Basketball
Next Up: Editor's Pick