Graduates of Harvard University have gone on to become presidents, governors, senators, and movie stars. In Tokyo on Tuesday, American sprinter Gabby Thomas was chasing something no other Harvard graduate has—a track-and-field gold medal from the Olympic Games. (One former Harvard student did win a gold medal in the triple jump back in 1896, but he never graduated).

Thomas was a strong medal contender in the women’s 200-m. At the U.S. Olympic Track & Field Team Trials in June, Thomas ran the 200-m race in a stunning 21.61 seconds, the third-fastest 200-m sprint of all time. It made her the second-fastest woman in the history of the race; The only woman in the history of the sport who has run faster than Thomas is the legendary Florence Griffith-Joyner, who set the 200-m world record back in 1988.

To win Olympic gold in Tokyo though would have required beating a slew of talented athletes. The women’s 200 m was stacked with gifted sprinters like Jamaica’s Elaine Thompson-Herah, who won gold in the event in 2016 and just won gold in the Tokyo 100 m, and Namibia’s Christine Mboma, who both ran faster than Thomas in their semifinal heat. Ultimately, Thomas finished third in the final, with a time of 21.87, finishing behind both Thompson-Herah and Mboma, who ran 21.53 and 21.81 respectively.

Becoming an Olympic medalist is just one of many impressive feats for Thomas, who is pursuing a master’s in epidemiology and health care management at the University of Texas at Austin, driven by a passion to reduce racial health care disparities and outcomes.

While such a schedule would be overwhelming for many, Thomas thrives on balancing it all. “Being in school really makes me appreciate what I’m doing on the track,” she said at Trials.

Read more: Meet 6 Heroes Who Helped Battle COVID-19 Before Competing in the Tokyo Olympics and Paralympics

Running and studying at Harvard

Thomas, who was born in Atlanta and has a twin brother, started running at the urging of her mother, Dr. Jennifer Randall, who told Sports Illustrated that Thomas “was pretty much born athletic.”

Despite her mother’s prodding, Thomas didn’t start taking running seriously until her junior year in high school at the Williston Northampton School in Massachusetts. She excelled and was recruited to Harvard to compete in the 100 m, 200 m, long jump, and triple jump. At Harvard, she was named the Ivy League’s Most Outstanding Track Performer in 2017 and 2018 and won the 2018 NCAA 200 m title. Running was almost an afterthought, though, as Thomas was a dedicated and determined student. While at Harvard, she majored in neurobiology and global health, inspired by learning about the Tuskegee experiment during a college course. “It really changed my life and shaped my time at Harvard, because ever since taking that course, I thought of everything I was learning in that lens,” Thomas said on the podcast My New Favorite Olympian.

Thomas has also said her interest in neurobiology is personal; Her twin brother has ADHD and her younger brother has autism. “Both of my brothers drew me to neurobiology,” she told The Undefeated.

Training for the Olympics

After graduating from Harvard in 2019, Thomas headed to Texas to join the Austin-based Buford-Bailey Track Club, founded by 1996 Olympic bronze medalist Tonja Buford-Bailey (and enrolled in the masters’ program in epidemiology at the University of Texas.) Thomas really hit her stride in Texas. According to the Olympics’ website, “the so-called ‘Bailey Bunch’ is one of the only training groups of Black women, led by a Black woman coach in the U.S.” It was the perfect environment for Thomas to grow as a runner. “I knew that if I wanted to train for the Olympics, I needed to be in an environment that was conducive to that serious type of training that I needed,” she told NBC’s On Her Turf in February.

There was a hurdle to leap, though. In May, Thomas learned she had a tumor on her liver. “I remember telling God, I was like ‘If I’m healthy, I’m going to go out and win trials,’” Thomas said on My New Favorite Olympian. “If this is not cancer, I will make this team.’” The tumor turned out to be benign and Thomas set out to do exactly what she had promised—she made the Olympic team in an impressive style.

Even months later, Thomas is still surprised by her performance at the Olympic Trials. “I am still in shock. I cannot believe I put up that time. I just want more for myself now,” she told The Washington Post. “My dream was to make the Olympic team, not to win Olympic trials, not even to break the meet record. Now that I’ve accomplished those, I’m going to set higher goals.” 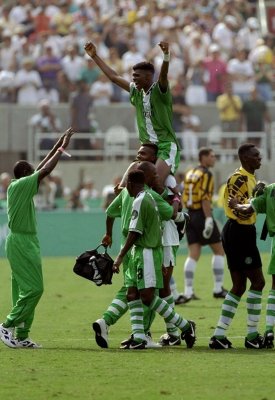 How Nigeria's 1996 Olympic Gold Changed the African Soccer World
Next Up: Editor's Pick