How Katie Ledecky Swims So Fast

At first blush, there’s no reason to think Katie Ledecky would be as dominant in freestyle swimming events as she is. “She doesn’t have especially large feet or hands which you really need to push a huge mass of water. She’s 5’11”, which is tall but she’s certainly shorter than other great swimmers,” says Rowdy Gaines, three-time Olympic gold medalist and now a swimming analyst for NBC. “And she definitely has a subpar kick.”

But since she made her first Olympic appearance in London, nearly every Ledecky race has been a scramble for second—and a distant one at that, since Ledecky is usually at least a half body length out front. (Though she does have some competition in Tokyo from Australia’s Ariarne Titmus in the middle-distance events). So what makes the 24-year-old so dominant in the pool? That answer involves a lot of hard work—she has a reputation for attacking training sessions—as well as the mechanics of her stroke.

Gaines points to her “feel” for the water—how she catches and holds the water with her hand and forearm—and the quick recovery she gains from every stroke because of the momentum she builds underwater. That helps her to pulse forward with every stroke farther than any other female swimmer. “Once she anchors her hand in front of her, she is able to propel her body past her hand better than anybody else,” he says. “She can go from zero to 60 really fast.”

He also believes Ledecky’s body position in the water gives her an advantage. Keeping the head aligned with her spine as much as possible, even during breaths, minimizes any break in forward momentum that could cost precious fractions of seconds. “The perfect swimmer is like a pole, and all you do is move the head along that pole, side to side,” says Gaines. “When she breathes, it’s not like her head moves that much, her head stays connected to her shoulders.”

Swimming the 200-m and the 1,500-m—and excelling at both distances—is the equivalent of Allyson Felix running the 400-m and the 5,000-m and being competitive in both, says Gaines. “It’s crazy and ridiculous. I would say nobody in history has the range that Katie has,” he says.

Even more impressive is the fact that because of the schedule, the 200m and 1,500-m finals are schedule for the same session, if Ledecky makes the finals in both, she will swim those races within about two hours of each other. She’s the only swimmer to likely race at both distances, but she’s pointed out that the same schedule doesn’t apply for the men.

There’s a consistency to Ledecky’s swims as well, in terms of stroke count. Aside from the first and last 50-m, in the 1,500-m, Ledecky tends to hit the same number of strokes each length of the pool—every time. “She manages the middle of the [1,500-m] race better than anybody else, even better than all of the men in the world,” says Gaines. In fact, he says, at the team training camp in Hawaii prior to arriving in Tokyo, Ledecky was consistently beating the men in sets, something she’s done at her previous Olympic camps as well. She wouldn’t admit it, but Gaines was impressed.

Her work ethic is also a key to her success in the water. Gaines is convinced that she actually likes the pain of long grueling sets, hence her love of the 1,500-m. “She embraces pain,” he says. “I hated being in pain. But I think she embraces the monotony of it, so she pushes herself to where it’s not sustainable for other swimmers.”

That makes her, he says, “a once in a lifetime athlete, just like Michael [Phelps] was. There won’t be another Katie Ledecky ever again. Not in my lifetime.” 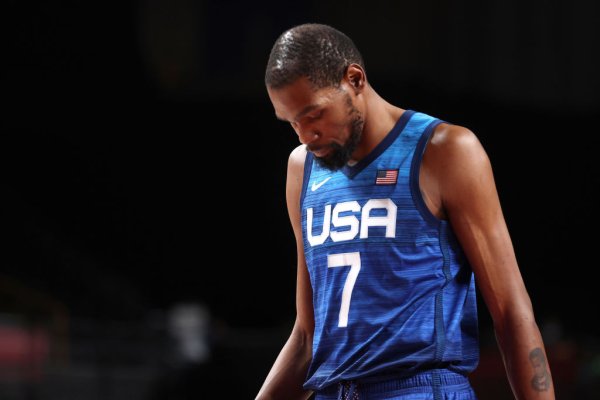 Team USA Men's Basketball Just Lost Its First Olympic Game Since 2004. American Fans Are Free to Freak Out
Next Up: Editor's Pick