With No Spectators Allowed, Olympic Families Are Turning to Watch Parties

When Lydia Jacoby won gold in the 100-m breaststroke, the fans went wild. The fans, though, were thousands of miles away, watching remotely from a party in her hometown of Seward, Ala. Since spectators were banned at the Tokyo Olympics, due to the COVID-19 state of emergency, friends and family have been forced to cheer for their athletes from a great distance. To make the experience more convivial, families and communities have organized watch parties to support the Olympians—and watching those watch parties has become a sport all its own.

Family cutaways and hometown reaction videos have long been a part of the Olympic broadcasts, but during these strange, muted Olympics with few spectators in the stands, the watch parties have taken on special meaning. And NBC has been including them in their coverage of the games, bringing some poignant moments to the broadcast. Take for instance, when Sunisa Lee vied for a gold medal in the gymnastics competition, her family organized a watch party for nearly 300 people in Oakdale, Minn. They were all gathered around the screen watching when the 18-year-old gymnast became the first Hmong American ever to win a gold medal. When Lee secured the top prize, the crowd erupted, jumping in elation, and cheering for their hometown hero. Lee later tweeted a video of the watch party, captioning it, “[T]he people I do it all for I LOVE YOU ALL.”

Around the world, from India to Bermuda to England, families and friends unable to attend in person are gathering around screens to watch and hope and pray and cheer for the Olympians. The energy in Tunisia was running high when family gathered to watch 18-year-old Ahmed Hafnaoui, a longshot in the 400-m freestyle. When the race turned into an underdog victory and Hafnaoui won the gold, his family was staggering with excitement.

Similarly, while Caeleb Dressel swam the 100-m freestyle, his family at their watch party were screaming so enthusiastically, he may have been able to hear them. When Dressel took gold, his friends and family were overcome with joy.

The emotion comes in part because close friends and families are crucial support systems for athletes, especially over the last year. After she won the medal, Jacoby was shown the footage of her friends and family back home and she had a huge grin to go with her new gold medal. “We all grew up together, so it means a lot they’re here supporting me,” Jacoby told Today. “We did this together.” 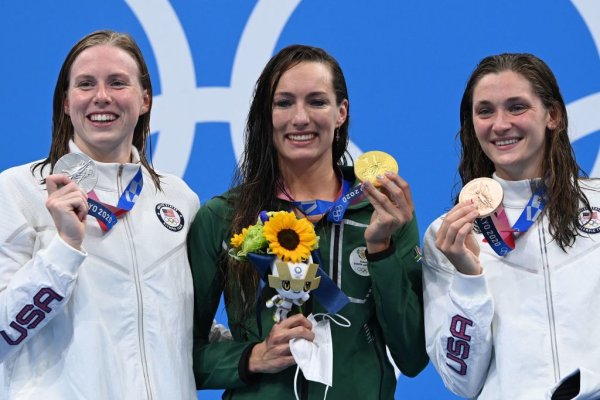 With Silver and Bronze Medals, Lilly King Fulfills a Solemn Promise to Teammate Annie Lazor
Next Up: Editor's Pick