Australia has pledged A$500 million ($379 million) in an effort to rescue the ailing Great Barrier Reef in the country’s largest-ever investment in coral reef conservation.

The landmark plan includes funds for improving water quality by reducing pollution from farm fertilizer runoff, and encourage reef restoration by experimenting with laboratory-grown coral that is more durable at higher temperatures, the New York Times reports. The proposal also includes A$58 million ($43.8 million) to stem the spread of crown-of-thorn starfish, a poisonous coral-eating predator.

“We’ll be improving the monitoring of the reef’s health and the measurement of its impacts,” Environment Minister Josh Frydenberg said at the plan’s announcement on Sunday. “The more we understand about the reef, the better we can protect it.”

But scientists and environmental advocates warn that the 1,400-mile-long Great Barrier Reef is already facing a full ecosystem collapse with global warming increasing water temperatures and acidity, leading to extensive coral bleaching. Two successive heat waves in 2016 and 2017 killed off nearly half of the northern reef’s coral, according to a study published this month.

A man snorkels in an area called the "Coral Gardens" in the Great Barrier Reef, near Bundaberg, Queensland, Australia.
David Gray—Reuters

Unless the coral conservation plan is accompanied by a “strong policy, to slash our carbon pollution, stop the Adani coal mine and rapidly shift Australia to renewable energy, we will not see a future for the reef,” said Imogen Zethoven of the Australian Marine Conservation Society, Australia’s ABC News reports. 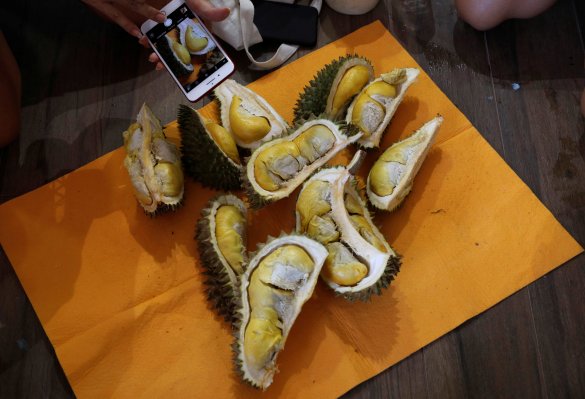 A Rotting Durian Fruit Prompted a Gas Leak Scare and Evacuations on a Melbourne College Campus
Next Up: Editor's Pick