Well, these Games have somehow begun. The Opening Ceremony for the Tokyo Olympics, a year delayed, publicly opposed in a host country that has spent north of $20 billion on them—nearly triple the original budget—went off Friday night on a humid 82-degree evening Tokyo, in an Olympic Stadium eerily quiet since it was devoid of its traditional horde of excited spectators.

You could have spent a better part of the night staring at the colors of the empty seats: patterns of white, red, forest green. In normal times, tens of thousands of fans from around the world would have filled them, lighting the stadium with flash bulbs, and celebrating the athletes marching in the parade of nations. Tonight, the scoreboard warned the approximately 900 stakeholders and special guests in attendance—dignitaries including First Lady Jill Biden and French President Emmanuel Macron—to “clap. Do not sing or chant.” (The protestors outside the stadium—who could be heard inside during quieter moments—had no issues chanting.)

In March 2020, when the International Olympic Committee (IOC) postponed the Games for a year, this night was supposed to celebrate the world’s triumph over COVID-19. It would be the party of all parties to cheer what the Olympics are purported to be all about—the power of the human spirit, especially when rallied against a common enemy like SARS-CoV-2. Instead, for the select few in attendance, it was almost like celebrating a wedding without the bride and groom. And that lack of fulfillment spilled over to the television audience, who also witnessed a far more subdued affair than in years past. The stadium floor served as a stage, and the clapping from the few people here had that polite theater vibe. The absent roar that usually marks the host country’s entrance couldn’t help but stand out. When the public address announcer asked for a moment to remember all who died in the pandemic, the place felt downright funereal.

No matter, these Olympics are happening, Japan’s state of emergency and positive Covid tests and all. The day before the ceremonies, their creative director, Kentaro Kobayashi, was fired because of a joke he made about the Holocaust in the 1990s. This development somehow fit the moment: it was yet another blow to the already-reeling Tokyo Games. On Monday, a composer for the opening ceremony resigned because he bullied childhood classmates, including those with disabilities. And earlier this year, the head of the Tokyo 2020 organizing committee, Yoshimoro Mori, made sexist comments and was forced to resign.

The show still provided some memories. Tap dancers on the wooden tables, for example, gave the night a catchy rhythm. Essential workers carrying the Olympic flag was a welcome touch. Naomi Osaka lit the Olympic cauldron. Tokyo made the most of it.

Live from a hollow venue in Tokyo, here are six things from the Opening Ceremony you might not have seen on TV.

A few hours before the Opening Ceremony, hundreds of people crowded outside the entrance of the Olympic Stadium, taking selfies near a statue of the Olympic rings and Jigoro Kano, the founder of judo. A metal fence near the Japan Olympic Museum divided the could-be spectators from the media and other workers entering the venue: some pressed against it, getting as close to the Olympics as they could. “It’s the Olympic Games,” said Borja Berecibar, a web developer who lives in Tokyo, through the fence. He was there with his wife. “If I can’t see it, I wanted to at least come here to feel it. It’s so sad.” He wishes the Games were delayed until next year. Like many in the throng, a few hundred strong, socially not-distanced, Berebicar wondered why he and others couldn’t be inside the stadium, perhaps in socially distanced in seats, if people were permitted to gather, with little regard for social distance. Just a few yards away, Yoshiko Kimura brought her husband and three children, aged 5, 9, and 11 because she feels the Olympics are a “once in a lifetime happening” and she wanted her children to “feel the atmosphere” even if they couldn’t enter the stadium.

One of the first scenes of the ceremony featured a woman running alone on a treadmill, an apt metaphor for the world’s running in place in its fight against COVID-19. “All over the world, there are many other solitary athletes like her,” said the Tokyo 2020 media guide distributed to press shortly before the start, by way of explanation. “They are all individual, separate ‘points’, but they are connected by an invisible bond.” The runner, by the way, was Arisa Tsubata, a nurse and boxer who won a national championship just two years after taking up the sport.

Nurse/boxer Arisa Tsubata performs during the opening ceremony of the Tokyo 2020 Olympic Games, at the Olympic Stadium, in Tokyo, on July 23, 2021.
Jewel Samad—AFP via Getty Images

In the bowels of the stadium, near where the athletes lined up to enter the ceremonies for the scaled down parade of nations, hung a true catch-all sign that captured the essentials that the pandemic has prioritized. It told the Olympians to keep their distance, that the marching entrance was 60 meters ahead of them, and that the “toilet” was 250-meters behind them. What else, really, does an Olympian need to know?

Despite that order that people in the stadium not sing or chant, the Olympians from Ghana, as they entered the dark tunnel under the stadium onto the parade of nations stage, sang away—and had fun doing it. The volunteers assigned to cheer the athletes as they entered appreciated the Ghanian enthusiasm. It was a nice break from a fairly staid parade. After all, once they came into the stadium, several Olympians spent the evening sitting around tapping on their phones.

In a quite unscientific survey of delegations entering the tunnel, during a portion of the parade of nations, we vote Australia—a country that has stood out for its Covid-control measures—as the most socially-undistanced crew.

For each each delegation that came into the stadium, a local volunteer carried a white placard, with the country’s name written in a dialogue bubble found in manga, Japanese comics and graphic novels. Their outfits featured manga tones. We asked the woman who held the Great Britain sign her favorite things about the country. She mentioned the Beatles and the Sherlock Holmes books. Behind her was the British Virgin Islands placard holder. His favorite? “Sherlock Holmes.”

Flag bearers Hannah Mills and Mohamed Sbihi of Team Great Britain leads their team out during the Opening Ceremony of the Tokyo 2020 Olympic Games at Olympic Stadium on July 23, 2021 in Tokyo, Japan.
Matthias Hangst—Getty Images

We wanted to ask more eager placard-holders about their favorite aspects of their assigned nations. But an official told us we weren’t allowed. In a state-of-emergency Olympics, the rules will rule. 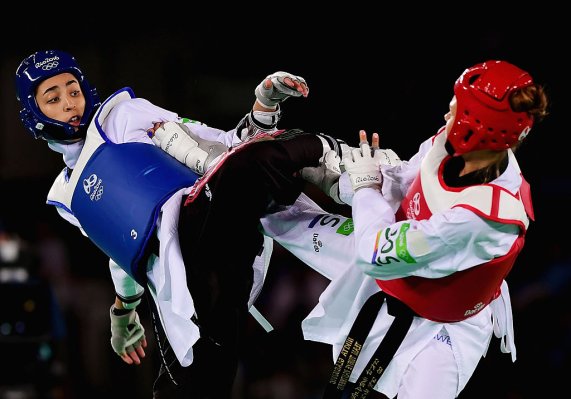 The Iranian Olympian Friends Turned Rivals at Tokyo 2020
Next Up: Editor's Pick