Unlike most members of the U.S. Olympic team bound for Tokyo this summer, surfer John John Florence can currently walk into a bar, maskless, without much worry, to enjoy a beer with some friends. These days Carissa Moore, who tops the World Surf League rankings—and who is also Tokyo-bound—can walk stress-free into a supermarket, and shoot hoops with her husband at a local recreation center to take her mind off of Games-related pressure. In late-April, American surfer Caroline Marks did something that sounds almost unimaginable for most Olympians around the world training amidst the COVID-19 pandemic; she attended a friend’s outdoor movie premiere, in the company of hundreds in a maskless crowd having a good time. “It’s awesome not to, you know, live in fear,” says Marks in a telephone interview, from Australia, where she, Moore, Florence and other Olympic surfers are competing and training for the Games.

While so many Olympians around the world grapple with adjusted-training routines and uncertain schedules less than 80 days from the Tokyo Opening Ceremonies, the surfers, who will make their Olympic debut this summer, find themselves prepping in an ideal location: Australia, a country that, thanks to measures like early investment in contact tracing and early travel restrictions, has contained COVID-19 and for the most part returned to normal, pre-pandemic life. The World Surf League staged a pair tournaments in eastern Australia in April and is holding two more on the west coast in May.

Hunkering down in Australia before the Olympics provides twin benefits. First off, the wave conditions during the events in eastern Australia—generally smaller and less powerful—are likely to mimic those at the Olympic venue in the town of Ichinomiya, some 60 miles east of Tokyo. Moore and Marks, for example, each won and event in eastern Australia, which bodes well for their medal chances. In Newcastle, Moore landed an aerial maneuver that the judges scored a 9.9 (out of 10); one surf outlet called it the “best aerial ever seen in women’s competition,” a WSL commentator said it was “a defining moment” for women’s surfing.

Most importantly, the surfers believe that training and competing in Australia has greatly benefitted their psychological preparation for the Olympics. By nearly eliminating COVID-19 concerns, Australia has given Olympic athletes one less thing to worry about. “The best I am, when I surf, is when I’m thinking the least,” says Florence, the world’s third-ranked men’s surfer. “It really allows me to focus all my mental energy on technique or whatever it is in that moment, rather than that thought of worrying about, dammit I forgot my mask at home, I can’t go to lunch now.”

Australia’s borders remain closed: the only people eligible to travel there are Australian citizens, permanent residents, and immediate family members. Australia has also set up a “travel bubble” with New Zealand, which has also controlled COVID; though on Thursday, New Zealand temporarily suspended flights from Sydney after a two COVID cases were detected there. Sports organizations, however, have worked with government officials to agree on exemptions; the Australian Open, for example, took place in February after tennis players from around the world were kept in a strict quarantine when they got there. After the surfers emerged from a mandatory 14-day quarantine upon arriving in Australia in March, the lack of restrictions took some getting used to. “You definitely walk into a restaurant and are like, Oh no, I don’t have my mask,” says Florence. “Then you’re walking halfway back to the car and realizing like, Oh wait, we don’t need a mask. That’s a trip.”

Mitchell Ross, a surf coach based in Australia, is working with Moore on the ground down under. “Her and her husband, they nearly felt criminal walking around the streets with no masks,” says Ross. “She’s slowly figuring out, this is the way it is down here in Australia. You walk into supermarkets, and it’s nearly old news because we’ve controlled [COVID-19] reasonably well.”

Surfers talk a lot about “flow”—that athletic state of bliss where you’re “in the zone,” all other mental detritus blocked out of your brain. You’re totally locked into your performance. Surfers want the rhythm of their minds to meld with the rhythm of the wave. For the surfers, the joys of re-entering society can help achieve this elusive state. “I am just so happy to be competing and living a normal life,” says Marks, currently ranked second in the world behind Moore. “When your mind is in a good place in life, everything starts to flow.”

Plus, the ability to unplug from the tour is key. “Carissa has a lot of noise in her head,” says Ross. “The surfers compare themselves to each other, since they’re free-surfing with their competitors all the time. It’s good to get their mind off the job for a second. Going to shoot a few baskets or have a coffee. Mix it up.”

The Australia-based surfers aren’t completely immune to pandemic stresses. For example Perth, the largest city in western Australia, went into a three-day lockdown before the surfers arrived on the west coast. “As free as it is here,” says Florence, “it still is a little bit on edge.”

Still, few people—Olympians or otherwise—wouldn’t envy the surfers, who are experiencing what life used to be, and what so many hope will soon return. “Sorry to tell you,” says Ross, “but it is fun.” 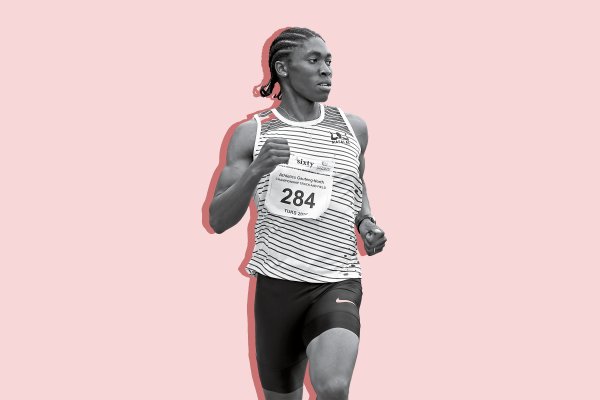 Caster Semenya Is Barred From Her Best Race. But She Won't Give Up On Tokyo
Next Up: Editor's Pick