How Will Empty Stands Affect Olympic Athletes in Tokyo?

The Opening Ceremony provided the first taste of what an Olympics without fans is like—devoid of the normal buzz of excitement and roar of the appreciative crowd, it was more solemn than celebratory. But it’s one thing to miss the noise for Opening Ceremony, quite another when it’s gone from the competitive events.

Not every sport will be as affected by the loss of spectators at the Tokyo Games. Athletes competing in events like archery, which requires concentration and quiet, for example, might actually appreciate the respite. But team-based sports and events like swimming races might seem, well, a little flaccid without fans.

Ask athletes if the lack of fans will affect them, and they have their standard answer—they train to compete under any and all conditions, so while it will be weird, they’re ready to push themselves even if nobody is there in person to spur them on.

But the reality is that any deviation from the norm has a potential impact on performance, so the quiet of an essentially empty stadium can be unnerving. Like it or not, consciously or unconsciously, athletes take their cues from vocal spectators—encouraged by claps and cheers, and even motivated by boos. “Crowd noise and excitement are something that increase athletes’ adrenalin even further,” says James Houle, lead sports psychologist for Ohio State Athletics. “Without a crowd, athletes will really have to find that energy within themselves or from their teammates. They will have to rely on each other more than ever to help with that energy.”

Mexico team celebrate their victory at the end of the Tokyo 2020 Olympic Games men's group A first round football match between Mexico and France at Tokyo Stadium in Tokyo on July 22, 2021.
Franck Fife—AFP/Getty Images

And there’s some early, intriguing evidence that having an audience has a quantifiable physiologic effect on the brain. Vikram Chib, associate professor of biomedical engineering at Johns Hopkins University, has studied how the presence of observers can affect people’s performance. He analyzes people’s performance on skilled motor tasks that he trains people to do in the lab, either in front of observers or alone. He found that a part of the brain related to theory of the mind, which processes thinking about what others think of you, become more activated when people are being observed. “We think theory of mind areas feed into how you process motivation, and is what gives rise to performance in an audience setting,” he says.

The region of theory of the mind is closely linked to how the brain processes incentives. In Chib’s study, the participants were taught certain skills and offered money if they performed well. “What we do know for certain is that having people watch boosts incentive,” Chib says. “So for athletes, incentives are multi-dimensional—it’s not just the fans, but they are playing for their country, and for the payoff of years and years of training.”

For elite athletes at the Olympic level, Chib says the presence or absence of fans may not have as large an impact on performance as it might for less accomplished athletes. So the top podium contenders at the Olympics, for example, may not experience much of a difference by competing in an empty arena. But for other athletes, the lack of fans may keep them from achieving personal bests that the adrenalin rush of competing under the rings might otherwise have provided. “That little bump of having the crowd behind them might have helped them achieve their personal best,” he says.

Most other studies on the subject to date explore home field advantage and have produced conflicting results, with some finding that the energy of a home crowd can spur more victories, while others found little impact. Already, the pandemic has provided some additional data on the impact of fans (or lack thereof). A study of Germany’s Bundesliga, for example, the first major sports league to resume games after the pandemic started—without fans—showed that the lack of spectators did affect the soccer players’ performance. Over six weeks playing to empty stadiums, home victories dropped by 10%, players took fewer shots on goal and they scored less than they had before stadiums full of people.

Such studies on the presence—or absence—of fans are just beginning, and unusual circumstances during the pandemic like the Olympics sans spectators could provide a living lab for scientists like Chib to learn more about how athletes are affected by competing in front of others. But in the meantime, Olympic athletes and coaches are coming up with other ways to simulate the missing crowds. “We’re going to make that venue loud even if it’s just us in there,” says Team USA Swimming men’s coach Dave Durden, of the swimmers who plan to sit in the stands if they are allowed, and cheer on their teammates.

At the top of the elite level, most athletes are used to compartmentalizing, especially in sports like track and field or gymnastics, where more than one athlete competes at a time in different events. So walking out to an empty arena might not be as disconcerting to the most seasoned athletes—and might even help some who get nervous while competing to make the biggest competition of their lives feel more like another practice session. “I personally love hearing the crowd noise if I’m behind,” U.S. swimmer Chase Kalisz said during training camp in July. “I love the crowd, love the noise and love packed arenas. But swimming is a solitary sport, and during training you spend most of the time in isolation by ourselves, so I don’t think personally it will be a big factor.”

Athletes practice for swimming events at the Olympic Aquatics Centre as part of the 2020 Summer Olympic Games.
Sergei Bobylev/TASS—Getty Images

Still, it might take some getting used to, and Houle relies on visualization to acclimate his athletes to a new situation like competing without fans. “When I work with people on visualization, I tell them to look around the arena, and imagine people in the stands,” he says. “And some people practice with crowd noise to prepare. Now I would tell Olympians to go into the arena, look around, and that is it—that’s what it’s going to look like.”

“It’s definitely a bummer because we always enjoy having fans,” says Simone Manuel a swimmer on Team USA in Tokyo. “But at the end of the day, once you dive in it’s about swimming fast and getting your hand on the wall first.” Because the clock doesn’t know if fans are there or not. 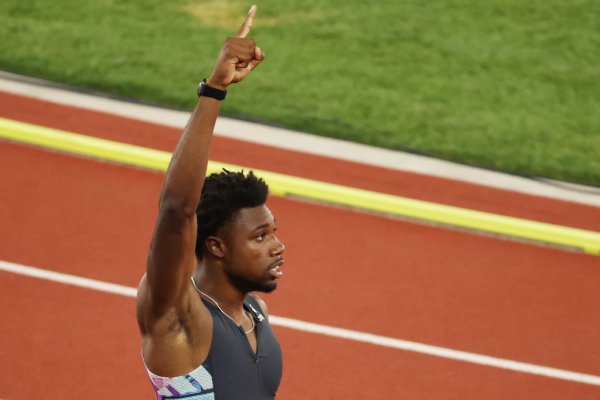 Noah Lyles Is Promising Sprinting Gold
Next Up: Editor's Pick