Last week, Zaila Avant-garde, a 14-year-old from a suburb of New Orleans, walked to the center of the 2021 Scripps National Spelling Bee stage.

“Now, Zaila Avant-garde,” the bee’s final-round word caller said. “If you spell this next word correctly, we will declare you the 2021 national Scripps National Spelling Bee champion.”

During the average minute of this year’s competition, nearly 230,000 people were watching the spelling bee live on ESPN2. Avant-garde slipped her hands into the front pockets of her gray jeans. She’d thought a little about what her victory would mean, how she—Zaila from Harvey, La., who had just entered the world of competitive spelling two years ago—could become the first Black American to win and hold the title of national spelling bee champion, which comes with a $50,000 prize. But for the next few minutes, that would be the furthest thing from her mind. For now, she was just praying, silently, for a bit more speller’s luck: a word she knew.

By now, you may have seen the video of what happened next. The deciding word was murraya, a type of tropical tree and a word she knew. A spontaneous twirl, arms outstretched, and two leaps into the air. The confetti explosion, the ceramic trophy in Avant-garde’s hands.

In the days since, it’s become clear that the teen who displays her spelling prowess, and what she can do with three basketballs, on morning TV shows is also a thoughtful girl capable of her own baby-voiced social analysis. She knows she earned her victory, and with it a place in history. That’s something to celebrate. But she also seems entirely aware, at 14, that the American gospel that hard work can get you anything is more myth than reality.

Then, she gets serious. She knows, she says, that the paucity of faces that look like hers in the world of competitive spelling isn’t because Black kids don’t want to spell. It takes resources to be competitive, and in a country where the median household incomes for Black and Hispanic families is tens of thousands of dollars lower than those for Asian and white families, some kids are at a disadvantage. She saw an example of that dynamic just recently: an aspiring speller to whom she spoke during a virtual Scripps event told her he didn’t have SpellPundit, a popular prep resource, an annual subscription to which in 2020 cost $600.

“I can’t even describe what not having SpellPundit is like. Like having a book but no pages,” she says. “But he said, ‘I didn’t have it because it was way too expensive.’ His family just couldn’t afford it. I mean, [my family] had a little bit of trouble affording it.”

The word is “opportunity”

The bee, controlled by the E.W. Scripps Company and known as the Scripps National Spelling Bee since 1941, has grown from a contest between a few dozen kids to, in 2019, a televised face-off between 562 finalists. Due to COVID-19, 2020 marked only the first time since World War II that the national spell-off did not occur. But the pandemic also created opportunities for the contest to evolve, says J. Michael Durnil, who has served as the bee’s executive director since March. While participation dropped this year by up to a quarter, he says, the pandemic also prompted the organization to dispatch computers and other resources to more than 200 finalists, in an effort to ensure that every child who made it that far could participate in a fair, equal and closely monitored fashion.

“It was really important to us, even as we looked at doing this virtually and bringing this up to the full contest [finals] in Orlando, that everybody had equal access,” says Durnil, who has spent most of his career working with disadvantaged students. “People live in different places, technology is very different… So we are pretty proud of the way we brought that forward.”

Including more students in the world of competitive spelling is a complicated task. Bees are full of wholesome glory and hard work rewarded, but they are also part of what Pawan Dhingra, a sociologist and professor of American Studies at Amherst College, describes as the nation’s hyper-education ecosystem. Spelling bees have become one of the many extracurricular activities that some parents view as a means to give their children an edge, a way to win admission to the nation’s most prestigious colleges, to internships, to jobs and to the high pay that they hope will follow. The implications are serious for children and the entire society, but the choice is not illogical.

“You can’t blame parents for playing in a game whose rules they did not create,” says Dhingra, author of Hyper Education: Why Good Schools, Good Grades, and Good Behavior Are Not Enough.

It’s now common for spellers to be coached by other past competitors who can charge about $200 an hour for their services, Dhingra says. Many of the kids who make it to the finals have studied with the aid of competitive spelling guides, special computer programs and private coaching that at one popular prep company can total more than $2,000.

Asked about the keys to her historic win, Avant-garde mentions the ability to control her own school schedule; she’s homeschooled and blocks out about seven hours each day to study words. She mentions her three spelling tutors, and specific computer programs she used to prep. She mentions that speller’s luck. And money. Almost all of that costs money.

Lest anyone assume that some kind of modern compulsion to compete, spend or coddle is perverting a once wholesome contest, there’s plenty of evidence that the bee has always highlighted the limits of American meritocracy. And that Black American girls like Avant-garde suffered for it.

In fact, during one of the first conversations Durnil, the bee’s executive director, had with Avant-garde, she mentioned the name MacNolia Cox. Cox was a 13-year-old competitive speller from Akron, Ohio—a Black girl some believe was robbed of the title in 1936.

Cox was the first Black student to spell her way into the national finals, which were then coordinated by a different organization. As she advanced through the competition, some of the judges grew uncomfortable as she spelled word after word correctly. When she missed the word “Nemesis,” the Greek goddess of revenge, a reporter following the girl through the contest protested. Proper nouns were not supposed to be among the words competitors were asked to spell, the reporter argued. The objections were rebuffed. With just five spellers left in the contest, Cox was out.

Read more: Past Winners of the Scripps National Spelling Bee: Where They Are Now

She wasn’t the first Black contestant dinged in a controversial way. In 1908, Marie Bolden, a 14-year-old black girl from Cleveland, won the national spelling bee when the contest was held in her hometown. Bolden, like Cox, was the only Black competitor, part of a team produced by that city’s integrated schools. (At the time, the bee was organized by the National Education Association and revolved around city teams, though the individual speller with the most words spelled correctly won the top prize.)

Bolden’s participation particularly galled the group from New Orleans. They demanded Bolden’s ouster. They threatened to leave. Bee organizers persuaded them to stay. Among the words the contestants were asked to spell: Negroes, prejudice, separate, persevere, misspell and embarrass, the Times-Picayune, New Orleans’ newspaper, has reported. In the end, Bolden earned a perfect score, the best on the first-place Cleveland team. New Orleans took third.

The Cleveland Journal, a now defunct Black weekly, reported that Black people across the country were elated by young Marie’s win. Booker T. Washington alluded to her victory in a public speech. The New York Times declared “COLORED GIRL WINS BIG SPELLING BEE”; the story ran beside bits of animal and garden-party news. But, unhappy about Bolden’s victory, New Orleans’ mayor barred a celebratory spelling contest planned at a Black church. Later, scrutiny of the written portion of the contest revealed that a proctor had offered the wrong definition of the word “capitol.” On review, two white Cleveland students emerged with perfect scores. As the Cleveland Plain Dealer explained in a 2017 story, “Marie lost her formal title,” but was allowed to keep her gold medal.

Then, as now, the national spelling bee was more than a contest of words.

When I talked with Avant-garde about a week after her big win, she was in the middle of a press tour, making her way from one Manhattan sound stage to another. In the last week, she’d appeared on Good Morning America, the Today show, CBS This Morning, the Black News Channel, SportsCenter and CNN. When she looked out her hotel window, she said, she felt as if she had walked to every place she could see. Barack Obama had congratulated her on Twitter, where her follower count soared to nearly 38,000. Even Google offered kudos, adding an animated surprise to the results generated when someone searched her winning word.

But, Avant-garde told me, she had started to sometimes feel “a little sad” about the way so many conversations veered from what she calls “my spelling,” then dwelled on the world records she has picked up for her basketball skills. Still, away from the studios, there’s also been something affirming. In the middle of busy New York City, more than one person had stopped her on the street and simply asked to shake her hand.

“People come up to me talking about how I’m making history and inspiring African Americans and stuff,” she says, the words tumbling out in a rush, “and that’s basically exactly what I wanted to do.”

The original version of this story misspelled the spelling bee winner’s last name in some instances. It is Avant-garde, not Avante-garde. 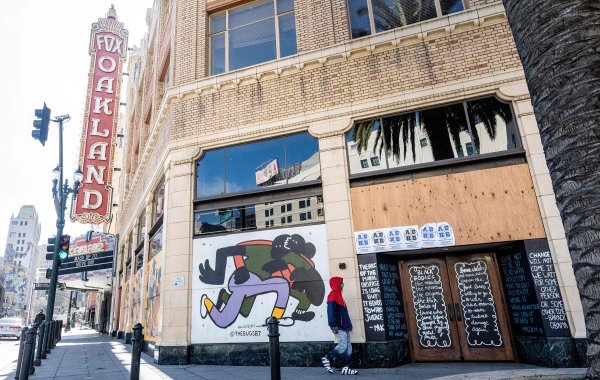 Guaranteed Income for Americans is Here to Stay
Next Up: Editor's Pick