This post contains spoilers for Black Widow, WandaVision and Falcon and the Winter Soldier

Black Widow is a prequel film set before Avengers: Endgame and doesn’t do much to advance the plot of the larger Marvel Cinematic Universe. It’s more a character study of Natasha Romanoff, an original Avenger who has been waiting for her own solo film for far too long.

But it also serves as an origin story for a new character: Natasha’s little sister Yelena, played by Florence Pugh. Even before the movie was released it was clear that Yelena would become a major player in the Marvel movies. Pugh shot to superstardom in 2019 with Midsommar and Little Women, and Marvel scooped her up. Presumably, they plan to center future shows and films around her character.

It’s no surprise then that Yelena features heavily in Black Widow’s end-credits scene. Here’s everything that you need to know about that villainous woman she meets, played by Julia Louis-Dreyfus, and when both Louis-Dreyfus and Pugh are likely to pop up in the MCU again. (Don’t worry, you won’t have to wait long.)

What happens in the Black Widow end-credits scene?

Most of Black Widow is set in 2016 shortly after the events of Captain America: Civil War when Natasha is on the run from the U.S. government. We find out that between the events of Civil War and Thanos’ invasion of Earth in Avengers: Infinity War, Natasha reconnected with Yelena. Together they returned to the Red Room, where they were both trained to be spies, in order to free a group of female assassins who were being mind-controlled by an evil Russian spymaster there.

In the movie, Natasha and Yelena discuss the many traumas they themselves suffered in the Red Room, including forced hysterectomies. They discuss their future plans, and Yelena mentions that while she cannot have children and doesn’t particularly want them, she would like to adopt a dog.

Fast-forward to the end-credits scene, which is set in 2023 after the events of Endgame. Yelena visits Natasha’s grave in Ohio. For those who have forgotten, Natasha died midway through Avengers: Endgame during her quest to Vormir with Clint Barton (a.k.a. Hawkeye, played by Jeremy Renner). There, the two Avengers were told one of them would have to sacrifice their life in order to attain the Infinity Stone that resided on that planet. Whoever remained would bring the Infinity Stone back to the Avengers and use it to defeat Thanos. Both Natasha and Clint valiantly try to make the ultimate sacrifice while saving the other, but it’s Natasha who finally falls to her death.

A woman played by Julia Louis-Dreyfus, named Contessa Valentina Allegra de Fontaine (Val for short), shows up. We can assume from their conversation that Yelena already works for Val as an assassin: Yelena tells Val not to bother her on her vacation time, and Val explains that she has Yelena’s next “target” lined up.

“Maybe you’d like a shot at the man responsible for your sister’s death,” Val says, and shows Yelena a picture of Clint. The photo sets the stage for Disney+’s next Marvel TV series, Hawkeye.

Will Florence Pugh appear in Hawkeye?

Yelena has set her sights on Hawkeye, and Disney has indeed confirmed that Pugh is set to appear in the Disney+ series slated for late 2021.

But taking Clint down will likely be a tougher proposition than Yelena’s expecting. Marvel has not yet released many details on Hawkeye, but we do know it centers on Clint teaching his new apprentice Kate Bishop the ropes—err, arrows. Hailee Steinfeld of True Grit and Edge of Seventeen fame is set to play Kate.

It’s unclear if Hawkeye has another villain in store for us or whether Yelena will fill that role. Nonetheless, if Yelena turns into an anti-hero who is trying to kill one of the Avengers, Kate will no doubt stand in her way. That means that we will probably get to see a face-off between Steinfeld and Pugh, two of the most compelling young actors in Hollywood right now.

Where have we seen Julia Louis-Dreyfus in the MCU before?

This isn’t Louis-Dreyfus’ first foray into the MCU. Though the character of Val was originally supposed to appear for the first time in Black Widow, pandemic-induced delays meant that she appeared in Disney+’s The Falcon and the Winter Soldier before Black Widow premiered in theaters.

We don’t learn much more about Val in The Falcon and the Winter Soldier than we do in Black Widow. She’s a mysterious figure who recruits morally ambiguous super-powered people to do her bidding. In The Falcon and the Winter Soldier, she asks John Walker to work for her. Walker (played by Wyatt Russell) was initially named Captain America after Steve Rogers (Chris Evans) gave up the mantle. In a monomaniacal bid to live up to Steve’s legacy, Walker took supersoldier serum, but the potion only seemed to aggravate his rage. He then killed an innocent man and was stripped of his title by the U.S. government.

At the end of the show, Walker tries to redeem himself by helping the new Captain America, Sam Wilson (Anthony Mackie) catch the bad guys, but he also commits some questionable acts that suggest he is neither pure evil nor pure good—just a figure of chaos.

Even before he murdered an innocent man, Walker was just generally a jerk. So it’s extremely disconcerting that Yelena seems to be in bed with Walker’s employer. Yelena is presented as a heroic character in Black Widow. This new career choice feels more sinister.

That said, Avengers (or potential future Avengers) love nothing more than avenging the death of a loved one. It’s right in the title. So who can blame Yelena for going after the man she thinks precipitated her sister’s demise?

Look, this is the MCU we’re talking about here. Characters are resurrected all the time, thanks to trickery, magic or parallel timeline shenanigans. Nick Fury faked his death in Captain America: The Winter Soldier. Vision died twice in Avengers: Infinity War only to return as a corporeal manifestation of Wanda’s imagination in WandaVision. Heck, Loki has “died” three times and always comes back. Even when Thanos killed him “permanently” in Infinity War a variant of Loki from a different timeline found his way onto his own TV show, Loki.

And Marvel is increasingly embracing the multiverse: Characters from Loki are playing hide-and-seek with each other across dozens of different timelines; the next Tom Holland Spider-Man movie will bring back villains from the Tobey Maguire and Andrew Garfield Spider-Man movies, suggesting that those Spidey movies exist in alternate timelines and Holland’s Peter Parker is going to travel through the multiverse; and the next Doctor Strange movie is titled Doctor Strange in the Multiverse of Madness. Any character from any Marvel property ever has a chance to return to the big screen.

So while Scarlett Johansson is currently telling every member of the press that she’s done with Marvel Studios—just as Chris Evans and Robert Downey Jr. did before her—there’s always a chance that some version of Black Widow or Captain America or Iron Man could find their way into a future Marvel film.

What’s next for the MCU?

A Young Avengers TV show or film looks increasingly likely. Kate and Yelena are also two prime candidates for a Young Avengers team. Several of the new Marvel shows and movies are introducing a cohort of young heroes who, at various times in the comic books, have joined forces to create their own crimefighting squad.

Disney+ will debut Ms. Marvel and Iron Heart, two series centered on young women superheroes. Other Young Avengers candidates have already appeared in recent Disney+ TV series, like Elijah Bradely in Falcon and the Winter Soldier, Cassie Long in Ant-Man and Wanda’s children in WandaVision. Plus, a character named America Chavez is set to debut in Doctor Strange in the Multiverse of Madness.

Meanwhile, the MCU is set to debut several new heroes in its upcoming films. Fans will meet reluctant superhero Shang-Chi in Shang-Chi and the Legend of the Ten Rings and godlike beings in Eternals. Old favorites will return too. Spider-Man, Thor, Doctor Strange, the Guardians of the Galaxy, Ant-Man and the Wasp and Captain Marvel are all getting new movies. And a Black Panther sequel titled Wakanda Forever that will focus on the many characters who made up the ensemble of that first film is also beginning production. 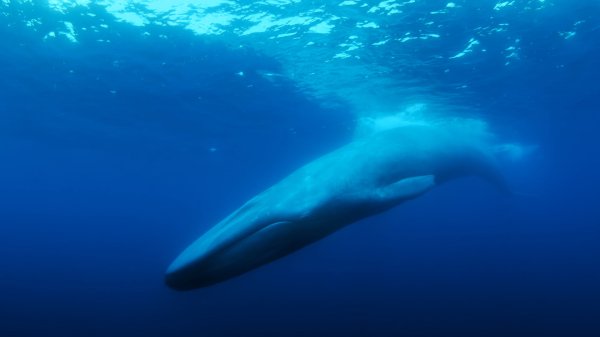 The Loneliest Whale Brings Us on an Invigorating Search for an Elusive Creature of the Deep
Next Up: Editor's Pick