There are three types of people in this world: those who are first in line for every Marvel movie, those who slouch toward them indifferently, and those who would prefer to stay at home and listen to Maria Callas, or watch Get Smart episodes on YouTube, or reorganize their kitchen cabinets. Black Widow is good enough, maybe, to merit the attention of even that last group. Working from a script by Eric Pearson (adapted from a story by Jac Schaeffer and Ned Benson, based, obviously, on Marvel characters), director Cate Shortland has fashioned a picture that invites you to care about the characters, as opposed to just caring about the franchise. The actors seem to know they’re in the hands of someone who knows what she’s doing; even the action sequences, heavily embroidered with CGI, as almost all modern action scenes are, show some human warmth. This is a picture that takes its job seriously without taking itself too seriously.

The movie opens with a backstory, a suburban childhood idyll that’s about to turn south very quickly: A young mother who has earlier explained, briefly, the science behind fireflies to her two young daughters gets dinner ready for her family. Her husband, the girls’ father, walks through the door, glumly. His bad day at work kicks off what will be framed as “an adventure” for the family, involving a long drive—the girls are rushed out of the house so suddenly, the younger one isn’t even wearing shoes—a hidden getaway plane that manages a takeoff even as police vehicles rush at it, and a bumpy landing in Cuba, where everyone suddenly knows how to speak Russian. The older daughter has some idea of what’s going on; the younger one, who just hours earlier was bopping along unironically to her favorite song, Don McLean’s “American Pie,” in the backseat of the family car, hasn’t a clue. In the next few minutes, the girls will be wrenched away from their parents—who, it turns out, aren’t their parents at all. None of this seems destined to end well; the opening sequence is both tense and intense, riffing on old-school fears of parental loss or desertion.

Twenty-one years later we meet these young girls again, now women: The older one, Natasha Romanov (Scarlett Johansson), also known as Black Widow, has managed to join the Avengers, though she happens to be at loose ends right now. (The story takes place during the period in which the infighting Avengers have broken up.) But her younger sister, Yelena Belova (Florence Pugh), has for years been a highly trained killer, under the thumb of evil mastermind Dreykov (a gnomish, whiskery Ray Winstone). Yelena has recently been freed from Dreykov’s spell—there’s a special potent red dust that does the trick. But she resents everyone, especially Natasha, who tried but failed to protect her when the two were kids. The sisters’ reunion involves a bone-cracking episode of hand-to-hand combat that ends in a truce, after the two have rolled themselves like burritos into a set of long white window curtains knocked down during the fight.

Yelena—formerly, as one character puts it, “the greatest child assassin in the world”—decides to join Natasha to take down Dreykov’s empire. Their mission reunites them with their crappy not-really-parents, the individuals who started grooming them for Dreykov years ago. The ersatz mom who introduced them to the wonder of fireflies is really frosty science whiz and Dreykov pet Melina Vostokoff (Rachel Weisz); dad, who truly wrecked everything for everybody the day he came home with his bad-mood face, is Alexei Shostakov (David Harbour), a.k.a. the Red Guardian, Dreykov’s hapless lapdog, now middle-aged and nearly useless. No one in this faux-family trusts or likes anyone, with good reason. Yelena, the baby-turned-child-assassin, feels especially stung: “The best part of my life was fake and none of you told me.”

The cracked family dynamic at the center of Black Widow is its finest conceit, and its simplest. Black Widow assumes no intricate knowledge of any previous Marvel Cinematic Universe product, beyond some basic sense of who the Avengers are. And everyone loves a messed-up family—onscreen, at least. Shortland, who made her directorial debut in 2004 with the striking coming-of-age film Somersault, seems acutely aware of the way families have to learn how to be family. Natasha is a real grownup, having accepted—perhaps even more than she should have—the raw deal her faux-parents handed her, and Johansson plays her with no-nonsense elan. Johansson’s Black Widow has always been one of the coolest superheroes: she always looks as if she has better things to do than play second or third banana to an Iron Man or a Captain America. Johansson has always felt solid in these movies, lithe and purposeful both in her classy stride and in the silky vibrato of her voice, but she has always seemed like a woman on her way to somewhere else more important. Apparently, that somewhere is this movie.

If Black Widow follows the standard Marvel template in some basic ways, it deviates enough to make its own mark. It’s blissfully free of that “Avengers working together” baloney, and all the smirky-cute bickering that comes with it. The big action sequences are typically Marvel in their lack of visual logic, but some of the more intimate ones—like Yelena and Natasha’s first, visceral standoff—at least serve the characters’ moods and intentions rather than just seeking to impress. Best of all, Black Widow sets up a framework for more of Pugh’s Yelena. Pugh—a restless rural English bride in Lady Macbeth, the perfect screen embodiment of petulant baby-sister Amy in Greta Gerwig’s Little Women—is a marvelous and versatile actor, and in Black Widow her physicality comes laced with a dry sense of humor. She mocks her sister’s trademark steroidal yoga Avengers-superhero pose with cutting precision, and then sort-of apologizes for it. (“It does look like you think someone is looking at you all the time,” she says, and she’s not wrong.)

But Pugh never shrinks from Yelena’s bitterness. This is a young woman who, as part of Dreykov’s femme army, has undergone an involuntary hysterectomy—now she’d just like to settle down and have a dog. In playing her, Pugh walks a delicate line between crabby self-sufficiency and basic human longing for touch and affection. When her mouth turns down at the corners, an emoji made flesh, you know she’s thinking about something she doesn’t have, but wishes she did. Pursuit of the nameless something just out of reach is the motor that keeps Black Widow whirring. If nothing else, it puts the self-serious quest for a dumb jeweled glove in perspective. 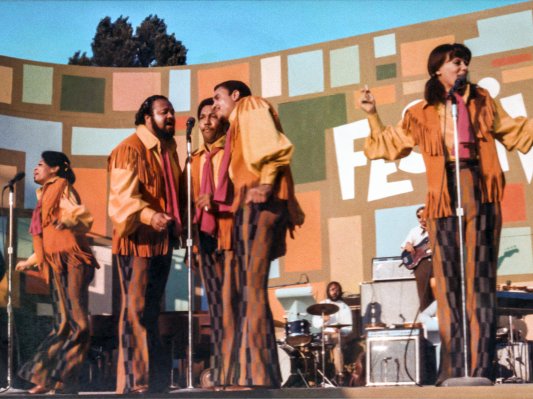