Because humankind will never stop inventing new forms for old stories, it was only a matter of time before we got a movie adapted from a Twitter thread. In Zola, directed and co-written by Janicza Bravo, a young waitstaffer at a Hooters-style restaurant makes a new friend who cajoles her into taking a weekend road trip to Florida. The goal is to make some quick money dancing at strip clubs, which seems forthright enough. But the ensuing adventure involves guns, sex work, a menacing pimp and a lovelorn boyfriend’s suicide attempt. And all of it really happened—or sort of happened—as recorded by a young woman named A’Ziah “Zola” King in a series of 148 tweets posted in October 2015. Each installment was a nail-biter rendered in 140 characters or less. Unsurprisingly, this prose poem of stripper life went viral.

With Zola, Bravo captures the brashness of King’s voice and turns it into a movie that works against all odds, a black comedy and crime drama that begins as a strippers’ lark and evolves into a NSFW saga of violence and sex trafficking. But Zola is also a story about platonic attraction between women. Sometimes we befriend women who are all wrong for us. We’re as susceptible to feminine magnetism as men are, even if the game doesn’t end in bed.

You can almost hear the click when Zola (Taylour Paige, recently seen in Ma Rainey’s Black Bottom) and Stefani (Riley Keough) meet in that restaurant: Stefani appraises Zola—and her winsome cleavage—with her hard little kitty-cat eyes. She’s both predatory and alluring, and Zola senses that she might be trouble. But who isn’t occasionally seduced by the thrill of the new? When Stefani, her hapless boyfriend Derrek (Nicholas Braun) and her so-called roommate (Colman Domingo) swing by Zola’s apartment to pick her up, she steps out to meet them, her stripper garb packed into neat, sensible little tote bags. She wears a satin baseball jacket over a tiny shorts outfit—she could almost be ready for church, if she just put on a longer skirt. Stefani, meanwhile, is all saucer-size hoop earrings and glitter eye shadow, a trailer-park siren who swears that everything she does is for her baby, an infant who may or may not exist.

Zola quickly susses out that Stefani’s “roommate” is really her pimp, and he plans to put the two women on the market together. Zola nixes that idea quickly, but she also gives Stefani some tips on how she can make more money from turning tricks. More enduring friendships have been built on less.

Zola’s comic absurdities are entwined with its horrors in a way that almost shouldn’t work. But Bravo—who co-wrote the script with actor and playwright Jeremy O. Harris—shows a lightness of touch in navigating the story’s quicksilver tone shifts, and the movie’s two leads bring their best: Even if it’s sometimes hard to like Stefani, it’s at least easy to see where she’s coming from; her ruthlessness is a survival mechanism. The calculations she runs perpetually in her brain are a substitute for a heartbeat, and Keough, a wondrous actor, puts that energy onscreen in Starburst colors.

But the movie belongs to Paige, as a writer-in-training who probably doesn’t know she’ll eventually wreak her revenge in a tweetstorm, but who’s taking mental notes even so. At the club where she and Stefani dance on their first night of the weekend, a scrawny white hillbilly paws at her with his eyes while tossing her his idea of a compliment: “You look a lot like Whoopi Goldberg.” Zola fixes him with a blank velvet gaze, but there’s steel behind it. This is the face of a woman who’s writing her future even as she’s stuck in a temporary bummer of a present. She’ll have the last laugh, and its sound will echo long after the last tweet earns its millionth like. 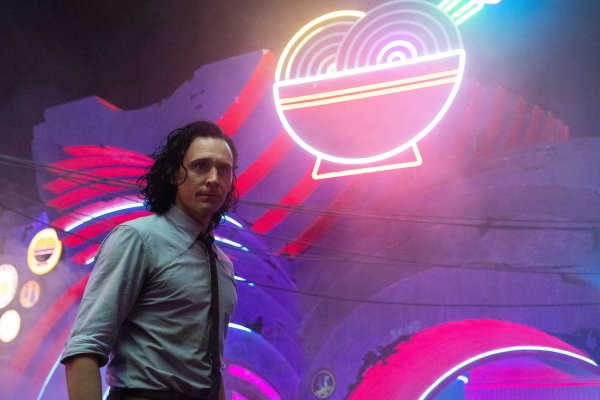 How Loki's Bisexuality Fits Into the History of LGBTQ+ Representation in the MCU
Next Up: Editor's Pick