If they handed out Emmys for trailers, Kevin Can F**K Himself would make a pretty strong contender. Unveiled this past February, the 98-second preview of AMC’s new series presents a provocative juxtaposition. In a handful of warmly lit, multicam scenes punctuated by a laugh track, Schitt’s Creek alum and actual Emmy winner Annie Murphy appears to be playing the role of the gorgeous, long-suffering wife in the kind of crass, casually misogynistic sitcom that stars Kevin James. But other, gray-tinged, single-cam shots show Murphy’s character snorting cocaine, punching out a mechanic, crushing a glass beer mug with her bare hand and then stabbing her husband in the neck with a shard. “It’s about a woman who keeps playing perfect housewife,” Murphy explains in a voiceover. “Then one day, she realizes what she wants.”

The clip generated quite a bit of anticipation, among people who care enough about television to devour trailers for shows that don’t even have release dates yet, anyway. It made sense: here was a beloved TV comedy actor starring in what looked to be a formally innovative, potentially quite dark parody of the very worst kind of TV comedy. Premiering June 20 on AMC and already available to stream on the AMC+ app, Kevin Can F**K Himself certainly does what it has been promising to do since the project was announced, in 2018: Murphy stars as Allison, a “beauty paired with a less attractive, dismissive, caveman-like husband who gets to be a jerk because she’s a nag and he’s ‘funny.’” If only the show crafted a worthwhile plot around this eternally disrespected character or meaningfully interrogated the messages TV sends about gender and class, instead of getting bogged down in faithfully recreating the thing it’s critiquing.

Set in the post-industrial environs of Worcester, Mass., Kevin the multicam sitcom hovers around the living room and kitchen of Allison and Kevin McRoberts (a perma-bellowing Eric Petersen). Theirs is a home we’ve seen before, decorated in the same chintzy style that art departments have projected on working-class families for decades, from All in the Family to Roseanne to James’ long-running CBS hit The King of Queens. To schlubby loudmouth Kevin, this place is a castle, and its door is always open to his neanderthal dad Pete (Chicago Fire’s Brian Howe), his idiot best friend Neil (Alex Bonifer from Superstore) and Neil’s sarcastic sister Patty (The Real O’Neals’ Mary Hollis Inboden, in the show’s best performance). Allison, who has no friends of her own, bustles around fetching beers and enduring endless jokes at her expense.

Annie Murphy as Allison, Eric Petersen as Kevin in 'Kevin Can F**K Himself'
Jojo Whilden/AMC

The moment her husband is out of the frame, Kevin shifts into moody, prestige-drama mode. In this desaturated realm, we get to know the real Allison, who fantasizes about a sophisticated life marked by gleaming Nancy Meyers-style kitchens and mornings spent at a seaside cafe with a copy of Ulysses. This is the Allison who reconnects with the one who got away, Sam (Raymond Lee), when he comes home to Worcester to open an upscale diner. And it’s the Allison whose resentment of Kevin—whose zingers and schemes conceal egregious lies, controlling behavior and manipulations that verge on abuse—suddenly bubbles over into a murderous rage.

This is where the drugs and the violence come in, though for the majority of the four episodes sent for review, Kevin remains blissfully unaware that anything is amiss. Allison leaves him in his delusional sitcom-land, and in sitcom-land he stays. Nested within each hour-long episode is a spot-on impression of a typical story arc from The King of Queens or Kevin Can Wait—the short-lived James sitcom notorious for unceremoniously killing off Erinn Hayes’ wife character. In one inspiringly stupid B-plot, Kevin turns his basement into the world’s crappiest, most poorly thought-out escape room, then gets stuck inside it with his very first customers.

Each half of the show has its high and low points. Along with the vicious verisimilitude of creator Valerie Armstrong’s (Lodge 49, SEAL Team) multicam pastiche, Petersen’s performance is surprisingly layered, working in glimpses of Archie Bunker and even Jackie Gleason’s Ralph Kramden in The Honeymooners, the series that set the slob-husband and bullied-wife archetypes. But once you get the joke—which doesn’t really evolve in the first half of the season—you’re just watching a convincing imitation of every hacky sitcom you’ve ever seen.

Meanwhile, as Allison progresses toward telling Kevin to f**k himself, a sort of Breaking Bad spiral commences. Each step in the direction of freedom sends her down a new rabbit hole of crime and danger—and the thing is, we’ve also seen a lot of stories like this one before. These segments do perk up whenever Hollis Inboden is onscreen; not only are her Worcester accent accurate and her comic timing immaculate, but Patty’s world-weary pessimism cuts right through Allison’s dreamy naïveté. (To be clear, there’s nothing wrong with Murphy’s performance. While she doesn’t disappear into the role of Allison the way she did with bratty Alexis Rose, the slight distance between the actor and the character convey how uncomfortable Allison feels in her own life.) Kevin could certainly improve if it places more emphasis on this relationship.

But the overarching problem is inertness. The show spends so much time vacillating between styles that it neglects to move what should be a thrilling plot forward. By episode 3 (Kevin and Neil go to war over who can make a better chili), Kevin is spinning its wheels. It also seems to lose track of the argument it’s making. It’s true: couples like the McRoberts are everywhere in what remains of network-television primetime, and they perpetuate ideas about men, women and marriage that are unrealistic at best and virulently sexist at worst. That’s enough of a critique to fuel a seven-minute comedy sketch. An eight-episode season needs to say more.

What’s frustrating is that there’s plenty more Kevin could say, and maybe even starts to say before trailing off. From the point of view of gender, isn’t there more to explore than the awfulness of one stock character? And couldn’t we have an episode that digs into the shame Allison feels about their working-class lifestyle? What about the role of TV itself? Along with its multicam sitcom and prestige drama modes, there are references to premium-cable soaps about posh women with man problems, like Big Little Lies and The Affair, plus some nods to police procedurals when cops enter the story. Yet the show doesn’t expand its meta-commentary on the sitcom wife into any broader insights into what it means to live in this age of Peak TV, when fictional characters play such a large role in shaping our identities, ambitions and expectations.

I don’t hate Kevin Can F**K Himself, but the gulf between the thrillingly subversive series teased in the trailer and the slower, tamer final product makes the early episodes that much more disappointing. Still, between the dynamite premise and the excellent cast, the show could easily be salvaged. It would be a shame if, in the end, the boldest thing about it was the title. 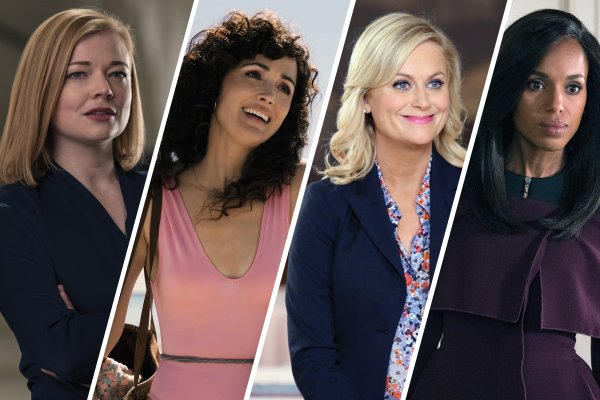 How Pop Culture Got Over the Girlboss Heroine
Next Up: Editor's Pick