Counselor to the President Steve Ricchetti (C) after playing a round of golf with US President Joe Biden at Wilmington Country Club in Wilmington, Delaware on April 17, 2021.
Jim Watson—AFP/Getty Images
By Philip Elliott

Steve Ricchetti had faced worse rooms. After all, he was President Bill Clinton’s eyes and ears in the Senate in the early 1990s and spent the end of that decade corralling Congressional Democrats’ support as Clinton faced impeachment. After a decade on K Street, he dipped back into the White House as one of then-Vice President Joe Biden’s core advisers, rising to the chief of staff role and architect of Biden’s aborted 2016 run for President.

In other words, he’s used to tough crowds when the stakes are high. But when Ricchetti met privately with House Democrats yesterday and told them that Biden’s plans for infrastructure would get a bit firmer in the next week or so, he didn’t expect it to set off the headlines that it did. Ricchetti, who now holds the nebulous title of Counselor to the President and is a de facto liaison to the Capitol and Wall Street, had merely sought to give skittish House Democrats an update on the White House’s posture. Instead, he set nervous allies into a tizzy: Was the White House closing in on a bipartisan deal on infrastructure? Was it finally ready to go it alone? Were talks productive, or imploding?

Welcome to Washington, where lawmakers, lobbyists and laymen alike are craning to see where things actually stand on Biden’s big-ticket infrastructure plans. The Kremlinology of D.C. at the moment is trying to figure out who, exactly, is at the helm of these policy talks and who has the power to actually negotiate the terms. While Biden hired a top-flight team of legislative veterans to helm his Congressional outreach, it’s a Ricchetti visit to the Hill that signals something serious is happening.

For the last six months, there hasn’t been a lot of progress when it comes to infrastructure talks. After a first attempt at a bipartisan compromise between Biden and Sen. Shelley Moore Capito failed, the discussion shifted to a bipartisan group of five Democrats and five Republicans to draft a deal. Those Senators yesterday briefed their colleagues at closed-door meetings, but the reactions were muted at best. Differences over the scope, the costs and the limits have sent the two sides spiraling in opposing directions.

In turn, progressives started drawing lines in the sand, demanding that climate change and family aid be part of the infrastructure talks. Others rejected plans to pay for the massive haul with a hike to gas taxes at the pump, rightfully noting that the result would be a disproportionate hit to lower-income workers. Conservatives, for their part, balked at some of the more ambitious wrap-around proposals, including child care, as extraneous. And partisan hacks just didn’t want to give the opposition a chance to declare victory.

That’s why so much attention was given to Ricchetti’s visit, including an unusual release of his exact words in the private meeting. “We’ll see where we’re going to go after a week or 10 days (of) more dialogue and negotiation,” Ricchetti said, according to a partial transcript obtained by The Associated Press.

The White House, sensing the seismic shift underfoot at the Capitol, started its damage control. Aides said the bipartisan talks were continuing in good faith and that the President was looking for a way forward with broad support that matches public polling. Ricchetti didn’t mean to convey a deadline or timetable, they insisted. He just wanted to share the White House’s assessment for where things realistically stand.

But Biden’s team is clearly losing patience with these talks and has marginal confidence that Republicans will ever muster the 10 votes needed to break a procedural roadblock. The White House is sensitive to the friction building on the left flank of the Democratic coalition over compromise and horse-trading. Ricchetti, a former lobbyist whose brother is still on K Street, is hardly the face of reform and change that Biden’s critics from the left seek. So when Biden gets back from his first European trip as President, his focus will need to turn to what he can get from Congress—and what price he’s willing to pay for going it alone.

For his part, Ricchetti is trying to convey to fellow Democrats that talks for the sake of talks cannot go on forever. Democrats remember all too well how badly an agenda can go off the rails when Congress breaks for summer recess with big questions looming. In 2009 and 2010, for instance, that break gave rise to the Tea Party movement, when conservative opposition to President Barack Obama’s agenda—especially on health care—snowballed and knocked Democrats from power at all levels: Republicans picked up seven seats in the U.S. Senate, 63 in the U.S. House, six governorships and flipped control of 20 state legislative chambers.

If Congress heads home for the July 4 holiday and then again in August without something tangible in hand, the prospects of delivering something get daunting quickly and the 2022 midterms look decidedly dour. So Ricchetti made the quick trip to the Hill to let those chasing bipartisanship know that their leash is getting shorter by the day. They’d be wise to remember that when Ricchetti left the Capitol, he returned to an office suite formerly occupied by Jared Kushner, David Axelrod and George Stephanopoulos, just steps from the Oval Office. Inside Biden’s tight inner circle, Ricchetti is the voice of cold realism and Biden heeds his counsel. 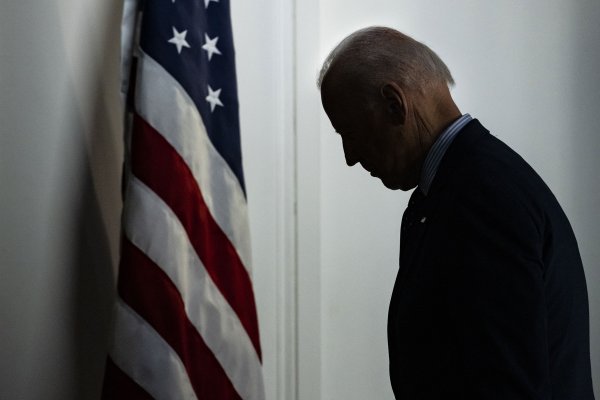 Facing a Stalled Agenda in Washington, Democrats Talk Up American Rescue Plan
Next Up: Editor's Pick