Hillary LaSever-Ceja, was getting ready to buy a new home in Tempe, Ariz., when her $4,200 stimulus check made its way from Washington to her bank account. The money Biden had delivered as part of his American Rescue Plan covered the closing costs that she had planned on just rolling into her mortgage. As a result, the lactation consultant was able to shave a percentage point off her interest rate, which, over the life of the loan, stands to save her thousands of dollars.

“During Biden’s campaign, he made that promise that we would all get a third round of stimulus checks and he delivered on that promise,” LaSever-Ceja told me last week by phone. She credits the president and Sen. Mark Kelly, the newly elected Arizona Democrat, for getting the sweeping measure passed. “That helped me become a homeowner,” she said.

LaSever-Ceja has the type of story Democrats across the country are starting to amplify ahead of the 2022 midterms: how their policies are having a direct impact on Americans trying to navigate the dwindling pandemic. Democratic strategists have spent the last six months looking at what worked and what didn’t in 2020, when Biden ousted a first-term President but Democrats failed to meet projections to make gains in the House. Progressives and centrists are trying to find ways to buck the historical trend that almost all Presidents lose seats in their first midterms—essentially their first report card with voters.

Nowhere is this narrative being tested more than in Arizona, a state with a peculiar political identity that screams independence through the canyons. In 2020, Biden narrowly flipped the land of Goldwater and McCain blue, and it’s now represented in the Senate by Kyrsten Sinema, whose radical moderation is driving her fellow Democrats batty, and Kelly, a former NASA astronaut filling out McCain’s final term. Both Democratic lawmakers, who won their seats last year, need to deliver near-perfect runs if they want to stay in Washington. In the background is the Republican-led effort to recount Arizona’s election ballots churns away, which has, unsurprisingly, drawn praise from former President Donald Trump.

That’s why if you’re in Arizona these days, flipping through the TV, scrolling through social media or driving down the highway, you won’t miss the push to credit Biden with the change in pandemic-mindset in Arizona. AB Foundation, a piece of the sprawling liberal network of American Bridge, is running two ads crediting Biden with helping small businesses, part of more than $100 million in positive spots aimed at the suburban women who are key to the nation’s swing vote.

Senate Democrats’ official campaign arm is ready with a 30-second YouTube spot touting what Washington has accomplished in the last few months with a closing tag of “Thank You Mark Kelly and Senate Democrats.” Tax March, a group that pushes fairness in the tax code, is running an ad thanking Kelly for his similar work. And outside groups are planning a seven-figure ad push specifically targeting the upcoming child tax-credit payments that are heading to families’ accounts any day—plus a few billboards thanking Biden and Kelly for getting the pandemic under control and letting folks travel in time for the July 4 holiday.

In short: kitchen-table issues are in, Medicare for All and Defund the Police are out. At least for now. “We’ve got to have an economic narrative that resonates. In 2018, we had one, which was about healthcare,” says Matt Bennett, a co-founder of the centrist think tank Third Way whose post-campaign analysis has been circulating among strategists. Key in that finding was that conservatives’ branding of Democratic candidates as hostile to police cost them votes in the suburbs. “We don’t know what the economic narratives should be yet,” Bennett adds. “It’s too far away for us to craft that because we don’t know how much of the Biden economic package will be passed and don’t know what the economy will be doing.”

The potential stall of Democrats’ ambitious agenda in the 16 months before the midterms means there may not be too many options for that narrative. Democrats may be left with just the single pandemic-relief bill to run on. By this time next year, those stimulus checks will have long been spent. It’s tough to make something so far in the past seem popular or a winning strategy. Which is why Democrats are smartly trying to boost them now. It might be the last tangible help voters should expect before Election Day 2022.

It may be enough for folks like LaSever-Ceja. She’s still packing her apartment in Mesa and preparing for the move to Tempe. And once there, she says, she’ll be able to get her kids into after-school programs because of the child tax credit included in the American Rescue Plan. She’ll still be feeling those benefits when the midterms come around — and Democrats are counting on it. 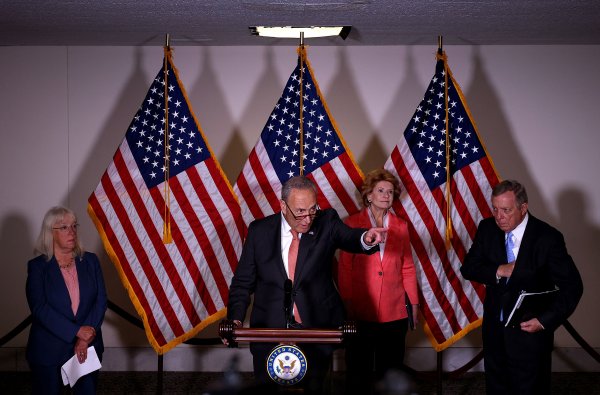 Manchin Again at the Center of the Democrats' Agenda Troubles
Next Up: Editor's Pick