You’d be forgiven for feeling a sense of déjà vu right now if you’re just tuning into today’s primaries in Virginia. Democratic mainstay Terry McAullife—bestie to the Clintons, former Democratic National Committee chairman and perhaps the most affable fundraiser in the party—is looking to again become the gubernatorial nominee. Standing in his way? Progressive activists who are looking at Washington and questioning whether the Beltway wisdom of moderation, compromise and comity makes sense in Richmond.

The same questions were asked 12 years ago in the commonwealth, during McAuliffe’s first of three bids for the top gig in Virginia. McAuliffe had the institutional backing of the state’s power base, more money than he needed and the name recognition that should have given him every advantage over his chief opponent, state Sen. Creigh Deeds. In that primary, McAuliffe came in a disappointing second, falling short of Deeds by 24 percentage points in 2009. Deeds, a popular figure among the ascendant progressive wing of the Democratic Party, went on to lose the general election by 17 percentage points in a campaign that was so problematic that it had an obit published in October—before November’s Election Day. (McAuliffe eventually prevailed when he ran for governor again in 2013, and served four years.)

Now, McAuliffe is looking to become the only Governor in Virginia history to twice be elected by voters as a Democrat. (There’s been one previous Governor elected by voters twice, but Mills Godwin served his first term as a segregationist Democrat and his second as a Republican.) As before, so much of the national conversation unfolding just across the Potomac River is coloring the mood of his electorate. More than a third of the commonwealth’s voters live in Northern Virginia, meaning everything that happens at the Capitol and White House is local news for them. They, unlike most readers of this newsletter, cannot escape the partisan churn when they turn on their 11 p.m. newscasts. All Things Washington are right beside local sports scores.

The feeling in Washington is eerily the same as it was 12 years ago, when McAuliffe lost to Deeds. A newly elected Democratic President is trying to strike a deal on major spending plans. For Barack Obama then, it was an economic stimulus plan and health care. For Joe Biden now, it’s also an economic stimulus and family aid plan. In both instances, intransigent Republicans stood in their way, moderate Democrats were pushing centrist positions that could win over Republicans, and progressives were feeling sold-out. With Obama, progressives overlooked a lot of his less-progressive positions and projected a lefty they could believe in. With Biden, they were delivered the most progressive platform in U.S. history. They also hated Donald Trump so much that they held their nose and went with the candidate they were told had the best shot of booting Trump back to Mar a Lago.

But today, unlike 12 years ago, the progressive movement has grown more organized. It’s moved from just loudness to power. The email lists are more robust, the tools that came out of Hillary Clinton’s loss and the resulting Resistance movement are formidable and the activists are feisty. The activists back in 2009 were frustrated, but they still had their Obama posters on their walls. This time, they are seeing that Ridin’ with Biden isn’t getting them very far and are speaking up.

All of which is to say that McAuliffe’s Election Day spot at the top of the primary pack shouldn’t be taken for granted. Things have changed since 2009, of course, and McAullife does have four years as a pretty successful Governor under his belt. But the progressive angst about what’s happening here in Washington has mainstream and progressive activists alike looking to his rivals, former Del. Jennifer Carrol Foy or state Sen. Jennifer McClellan. (Lt. Gov. Justin Fairfax, who has denied sexual assault allegations against him dating to 2000, is also running with scant cash, as is Del. Lee J. Carter, a self-described socialist.)

None of this is to say the Democratic nominee who prevails in Virginia today is assured to hold the Executive Mansion, especially if Washington can’t find a way to dislodge gridlock. For sure, Virginia has migrated from the deep-red former capital of the Confederacy to a purple swing state and now seemingly a solid-blue commonwealth. But Virginia Republicans dodged trouble when they bypassed Trump-cloned candidates and selected a Trump-adjacent multi-millionaire who has already loaned his own campaign $12 million. And history—while hardly predictive—suggests very strongly that the party that wins the White House loses the Governor’s position in Virginia the following year, though McAuliffe broke that trend in 2013.

The race is probably going to set records for spending. After all, it and New Jersey are the only statewide contests scheduled this year. (A recall in California could change that.) Outside groups on both sides usually use Virginia as a testing ground for new messaging, tech and tactics ahead of the midterm elections that come the following year. And its proximity to D.C. makes it attractive for political types to dip a toe in from time to time.

But that proximity also carries risk at a time when Washington is nominally under Democratic control and the prospects for delivering much more than a massive first bite of a stimulus plan are dwindling fast. A frozen, centrist D.C. might open the door for a progressive nominee tonight—and maybe even its first Republican to win the Governor’s gig since 2009. 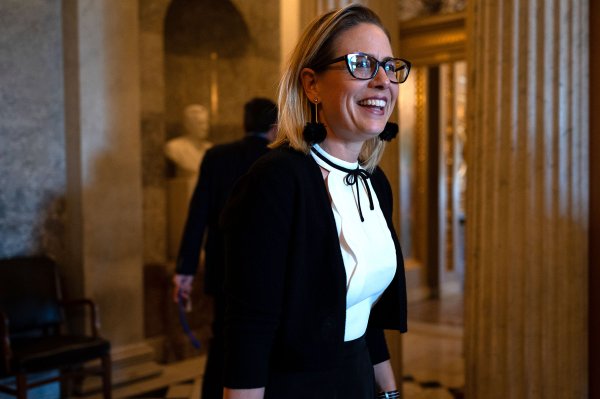 Why Kyrsten Sinema Could Control the Future of the Filibuster
Next Up: Editor's Pick