Review: Two and a Half Men Stays True to Its Wicked Heart

Spoilers for the series finale of Two and a Half Men follow:

A disclosure: I wasn’t much of a fan of Two and a Half Men most of the 12 seasons it ran. So reviewing its finale is a bit like giving the eulogy at the funeral for somebody who was not actually a friend.

Then again, that seems exactly in the spirit of Two and a Half Men, which killed off Charlie Harper in 2011 (or as it turns out, “killed” him), then threw him a funeral full of speeches from people he screwed over, or simply screwed, and left with bitter memories and venereal diseases.

But as it turns out, I don’t need to speak ill of the dead, or at least of Two and a Half Men‘s dying. Because taken as an hour in itself, its bawdy, sentimentality-free goodbye was a funny and deeply weird hour of score-setlling, fourth-wall-breaking, hugs-and-tears-denying TV.

It may be that the finale worked better for me precisely because I wasn’t that invested in the sitcom, hadn’t been a regular viewer for years, didn’t have a dog in the fight between Charlie Sheen and Chuck Lorre nor much burning desire to see Sheen come back. Probably anticipating a fair number of lookie-loos and onetime viewers returning just for the ending, the finale did a lot of recapping and self-referencing. (“You mean from the pilot?” asked Melanie Lynskey’s Rose when asked to update us on her history with Charlie since she reported him dead years ago.)

Maybe a more dedicated fan–especially a dedicated Charlie Harper/Sheen fan–might have been more bothered by the comedy thumbing its cocaine-smeared nose at its longtime lead character. But the finale was a rare thing in TV land. Often even the most hardboiled of series feel obligated to trowel on the sap as they come to an end–whatever the characters have done over the years, the actors, crew and audience have an emotional history with the show.

Not Two and a Half Men, which went out dark and weird. It filled in Charlie and Rose’s history with a bizarre animated sequence which found the two in Paris, where Charlie nose-Hoovered up a table of spilled sucre and ended up in a menage-a-chevre involving a goat. It ran down the characters’ prodigious sex history. (“You slept with my mom!” “That was just a handie in a hotel bar. I am a gentleman!”) And it addressed, over and over, knocks against the show from critics and fans, bringing on Arnold Schwarzenegger to declare, “This whole thing has been going on waaaaay too long.”

The whole business captured a strange paradox of CBS sitcoms, of which Two and a Half Men was the most brazen example. They’re the most retro comedies on TV in terms of format–see the revival of The Odd Couple–and yet they’re also often broadcast TV’s most adventurous comedies in terms of both raw content and tone. Even critical darlings like Parks and Recreation hew close to the mandates of likeability and warmth. To find anything like Two and a Half Men‘s commitment to mercenary, misanthropic meanness, you have to go to a cable sitcom like It’s Always Sunny in Philadelphia.

For years, Sheen’s Charlie Harper was the dark coal that fueled the show. And maybe inevitably, the finale recognized that the sitcoms was always his, for better or worse, even after he left it. Lorre could have just chosen to forget Charlie Harper–to move on as the show itself largely had during the Ashton Kutcher years. For most of the rest of the world, after all, Sheen’s meltdown and departure from the show is just a bizarre pop cultural memory.

Instead, this was a final hour built around an actor who wasn’t even there (though in a title card at the end, Lorre said he’d tried to get Sheen to return in person for his piano drop). The gonzo final storyline involved an unseen Harper’s maniacal breakdown, complete with “tiger blood” reference. And toward the end of the hour, Alan mused on his former roomie’s future in a way that left little doubt which Charlie he was really talking about: “He’ll sober up, reflect on his past mistakes, apologize to everyone, and then do something worse.”

Lorre’s one gesture of generosity was to have himself crushed by a grand piano too, moments after uttering Sheen’s catchphrase, “#Winning.” It was self-referential and self-indulgent, but a nice gesture in its own, blackhearted way: the show went out not with a “Farewell, old friend” but with a “See you in hell!”

Was it appropriate? Classy? I just know I laughed. Great TV or no, Two and a Half Men ended its many lucrative years in a way true to its nature: going for the punchlines, laughing at death, as expensive objects rained from the sky.

Read next: ‘Two and a Half Men’ Producer Explains That Weird Final Episode 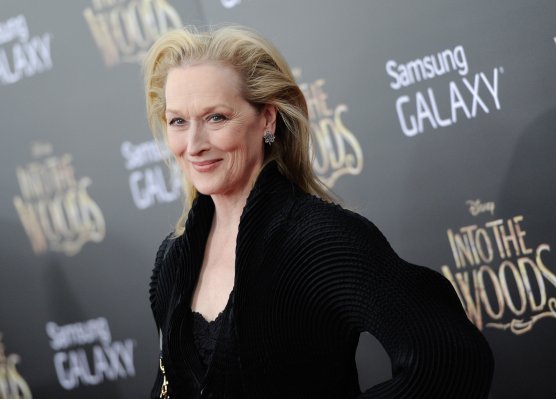 Will One of These Movies Win Meryl Streep Her Next Oscar?
Next Up: Editor's Pick