For decades, Cruella de Vil has been known as one of Disney’s most evil characters. “Cruel” and “devil” are literally in her name. She’s on the American Film Institute’s list of the 100 Greatest Heroes and Villains—coming in just before Freddy Krueger and the Joker. Her personal anthem, the song that plays in the animated version of 101 Dalmatians, is all about how “if she doesn’t scare you, no evil thing will.” And her defining characteristic is that she loves dalmatian fur so much she’s more than willing to kidnap a bunch of puppies in the hopes of skinning them for their spots.

Cruella, the new Disney live-action film, wants us to reconsider everything we thought we knew about the character by giving her the origin story treatment. The movie, which arrives May 28 in theaters and on Disney+ with Premier Access, stars Emma Stone as the infamous dog-napper before the events of 101 Dalmatians. Directed by Craig Gillespie (I, Tonya), Cruella is set in 1970s London where the titular character, known then as Estella, works as a designer for fashion icon Baroness von Hellman (Emma Thompson). Their relationship gets messy quickly, and spurs Estella to lean into her mischievous side, culminating in an intense power struggle between the master and the protégé.

Though this is the first time we’re seeing Cruella de Vil’s coming-of-age and rise in the fashion world, her origins can be traced back to several places. There’s Dodie Smith’s 1956 children’s novel that 101 Dalmatians is based on, as well as the real-life women that the creative team behind the 1961 movie were inspired by when developing the character. Here’s everything you need to know about the origins of Cruella de Vil.

Read more: From Cruella to Maleficent to the Joker: Is It Time to Retire the Villain Origin Story?

Cruella on the page

When Dodie Smith first introduced Cruella de Vil in her novel The One Hundred and One Dalmatians, she called immediate attention to the villain’s outfit. The book’s human protagonists, Mr. and Mrs. Dearly, are on a walk as a car passes by and Cruella steps out of it. “She was wearing a tight-fitting emerald satin dress, several ropes of rubies, and an absolutely simple white mink cloak, which reached to the high heels of her ruby-red shoes,” Smith wrote. Mrs. Dearly remarks that she knew Cruella from school—and that she’d supposedly been “expelled for drinking ink.” (The Dearlys are not featured in the film adaptations of the book—the humans in those movies are instead Roger and Anita.)

July 1934: British dramatist and writer Dodie Smith, author of 'One Hundred and One Dalmatians', at home with a dalmatian dog.
Sasha/Hulton Archive/Getty Images

In Smith’s novel, Cruella de Vil is married to a furrier, and she tells Mrs. Dearly that she kept her last name—unusual enough in those times that it required explanation—because she was the only surviving member of her family. Smith provides more details on the genesis of Hell Hall (where the puppies are held captive), including that it was originally named Hill Hall, then an ancestor of Cruella’s bought the property and shady stuff went down there. Villagers were frightened by the owner—who might have been Cruella’s grandfather—particularly after a rumored night involving a thunderstorm in which “the lightning was coming not from the skies but from de Vil.” (Cruella, notably, includes an early scene at the mansion with similar weather.)

Aside from these anecdotes, Smith doesn’t delve too much further into her antagonist’s backstory. Though some characters differ, the central plot of The One Hundred and One Dalmatians is the same as its film adaptations: after the Dearlys’ dogs have puppies, Cruella makes several requests to buy them, but the family will not allow it. So she takes matters into her own hands and hires thieves to steal the puppies. The adult dogs go on a mission to find them, and discover other stolen puppies in the process. While discussing with the henchmen what to do with the puppies, Cruella makes an exclamation that succinctly captures her cruelty: “Poison them, drown them, hit them on the head. Have you any chloroform in the larder?”

Dodie Smith, author of '101 Dalmatians', sitting outside her cottage with a pet Dalmatian in Essex, July 23, 1973
Getty Images

In 1967, Smith published a sequel to The One Hundred and One Dalmatians, in which one morning the now grown-up dalmatian puppies discover that all living creatures have succumbed to a mysterious sleep. The sequel, The Starlight Barking, is not connected to the sequel films 102 Dalmatians (2000) or 101 Dalmatians II: Patch’s London Adventure (2003). In the book, it’s up to the dogs to decide what to do when it appears that everyone around them cannot be woken up. Cruella de Vil does not have much of a presence in The Starlight Barking—the dogs do make a visit to see her, but find that she is also asleep, and is no longer obsessed with fur coats (instead, plastic raincoats). The book was certainly not as popular as its predecessor—perhaps because it was lacking a villain of Cruella’s stature. “Miss Smith’s affection for dogs is evident in their warmly drawn personalities, but her virtue is also the story’s undoing,” Rachel R. Finne wrote in a 1968 New York Times review of the book. “All villains have been consigned to sleep; unable to cast a canine as a bad guy, she has omitted the vital ingredient, conflict.”

Cruella’s journey to the screen

Walt Disney acquired the film rights to The One Hundred and One Dalmatians shortly after the book was published. In 1961, the animated movie arrived, and it was Disney Animation Studios’ first not to be hand-inked (a Xerox process was used for the drawings). The film was a commercial and critical success—it was the highest-grossing movie the year it came out and, as of 2019, had made over $102 million, according to Insider.

In the animated film, Cruella de Vil’s villainous qualities were heightened compared to on the page, and it was important to the creators for her to appear like more of a modern-day villain given that the movie was Disney Animation Studios’ first to feature a contemporary setting. Marc Davis, the animator behind iconic Disney characters like Sleeping Beauty’s Maleficent, spoke about basing Cruella on a woman he met in real life as well as the actor Tallulah Bankhead. “I had several partial models in mind when I drew Cruella,” Davis told the Los Angeles Times in 1985. “Including Tallulah (Bankhead) and one woman I knew who was just a monster: She was tall and thin and talked constantly—you never knew what she was saying, but you couldn’t get a word in edgewise. What I really wanted to do was make the character move like someone you wouldn’t like.”

Not only did Bankhead, who had a lengthy film, television and stage career in the 20th century, have a very distinct Cruella-esque look (including drawn-on arched brows), but she was also known for driving quite manically. “It was during these years that another one of the traits that links her to de Vil emerged: her penchant for driving her Bentley around London at break-neck speed, much like the Disney villain behind the wheel,” Rebecca Cope wrote for Tatler.

While developing de Vil’s character, the Disney animators also brought in character actor Mary Wickes. “She had very distinctive features,” Steve Taravella, who wrote a biography of Wickes, told Entertainment Weekly in a recent interview. “She was tall, lanky, and had exaggerated expressions; she was very limber and could easily contort her body. She wasn’t afraid to do physical comedy.” In January 1959, Wickes reportedly arrived on a Disney soundstage where animators played de Vil’s recorded dialogue and asked her to perform alongside it. (It was a common practice for Disney to bring in real-life models for inspiration for their animated characters).

This all culminated in the version of Cruella voiced by actor Betty Lou Gerson. “Enter, like a blow-torch, Cruella De Vil, with two cockney aides ready to spirit Pongo’s pups,” Howard Thompson wrote of the villain in a 1961 New York Times review of the film. (The “d” in de Vil has been alternately capitalized and lower-case throughout various projects; here we use lower-case as is used by the original novel and the new Disney film). “Imagine a sadistic Auntie Mame, drawn by Charles Addams and with a Tallulah Bankhead bass.” The movie was so popular that a live-action version followed, three decades later, with Glenn Close starring as Cruella. Fashion was a much bigger part of that film with Cruella running her own fashion company, the House of DeVil. Presumably, this served as inspiration for Cruella, in which Emma Stone plays an up-and-coming designer.

Throughout the 1996 version, Close was dressed in glamorous outfits that were so elaborate that she couldn’t sit down in them, according to Vanity Fair. In the canon of Disney villains, Close’s Cruella stuck out to some fans as somewhat of a feminist icon, with her successful career and decision not to have children or a husband. In a 1996 interview, the actor said she enjoyed playing such a ruthless villain: “I think Cruella basically has no redeeming human characteristics. Except she does have a sense of humor, albeit wicked. “She’s a GREAT character. She’s gleeful in her evilness, and there’s something very engaging about that.”

The latest version of Cruella

Cruella is centered on the fashion scene of 1970s London with Emma Stone as the young de Vil, an aspiring designer who lands a highly coveted job working for Thompson’s Baroness von Hellman. In 2019, Stone spoke to Entertainment Tonight about how she drew inspiration for her character from both Close’s 1996 performance and the 1961 animated version. “I think she’s obviously the GOAT,” Stone said, referring to Close. “But I also have just loved the cartoon for a really long time.”

For Cruella, Disney brought in the Oscar-winning British costume designer Jenny Beavan (A Room with a View) to develop the character’s style. Beavan recently spoke to Vogue about collaborating with Stone to craft Cruella’s look and what was important to her in creating the villain’s aesthetic. “The colours for Cruella were clear: black and white with some grey, plus the red for the signature moments,” Beavan said.

While fashion remains one of de Vil’s central interests across adaptations, her obsession with fur appears to have dropped off in the 2021 film. Of Stone’s more than 40 costumes in Cruella, none involve fur. “While dalmatians and other dogs are present in the film, Cruella doesn’t share the same motivations as her animated counterpart,” Disney wrote in production notes. “In this film, the character Cruella does not in any way harm animals.”

It’s an interesting choice to strip a villain of one of her signature characteristics—one which, perhaps, the studio found too risky given the fervor of animal rights’ groups. Many viewers, surely, would have struggled to find empathy for a dog-killer. “Among our fictional bad guys, reasons have taken the place of the glorious, naked id,” wrote TIME critic Stephanie Zacharek in her review of Cruella, asking whether perhaps assigning a justification or motivation to every villain’s bad behavior extracts some of the fun. “Villains are no longer enigmatic, exciting cautionary figures; they’re homework.” 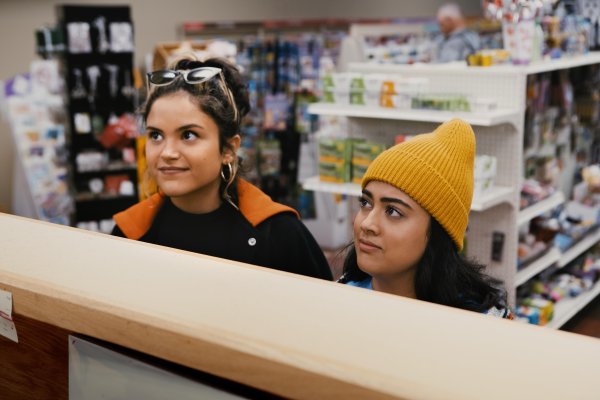 Hulu's Plan B Is an Imperfect Buddy Comedy
Next Up: Editor's Pick