‘The whole male-female thing in this country is very volatile right now. I think many women are feeling used by men. They invest a lot in a relationship, in nurturing a man emotionally and in his career, but they have their own careers and emotions and they don’t get that nurturing in return.” These words are Glenn Close’s, and they offer a perfect description of her newest film, The Wife. But this quote is actually three decades old; she said it to this magazine in 1987, shortly after she finished Fatal Attraction.

If Close were trying to shake the specter of Alex Forrest–the bunny-boiling career woman who tried to destroy her married lover’s family in that movie, which remains Close’s most iconic role–The Wife‘s Joan Castleman would be just the ticket. She’s everything Forrest was not: long-married, dutiful and supportive, a woman who has spent her life polishing so her spouse could shine. She’s neat and nurturing and nice to everyone. She’s a wife, after all.

Or is she? Forrest, Close has long said, wasn’t the unhinged harpy everyone took her for, but rather a mentally ill woman damaged by childhood sexual trauma. Similarly, in The Wife, based on the novel of the same name by Meg Wolitzer, all is not as it seems. From the moment Joe Castleman, Joan’s husband, discovers that he has won the Nobel Prize for Literature, the threads that have bound the couple tightly together for decades begin to unravel. Watching Close portray a woman who has given more to her marriage than she perhaps should have is like watching the fog lift from a stranded ski lift. By the end of the movie, audiences can see what’s going on clearly, but the view is still a little shocking.

The Wife arrives at time when male-female relations are at a volatile level–yes, again. The #MeToo movement, the Time’s Up initiative and the pink wave have all made it clear that lip service isn’t enough to redress the unequal balance of power between the sexes. Plenty of women remain in Joan’s position, putting their hopes and gifts on simmer in order to fan the flames of a talented man. But Castleman-like men who were once considered too talented to be brought down are increasingly being toppled from their lofty positions in business and the wider culture because of the way they treat women.

“I’d like to think that we’re not going to go back to where we were,” says Close, sitting in the living room of her cozy but modest Greenwich Village pied-à-terre, with her beloved dog Pip on a cushion near her feet. “I’d like to think that we’re at the beginning of a real cultural revolution.” Close says she didn’t know about Harvey Weinstein’s alleged predations–the only thing he did to her was never offer her another part after she turned one down–but the extent of the #MeToo movement didn’t come as a surprise to her. “I haven’t read all the feminist material,” she says. “But no one seemed to be held to account as much as they are held to account now.”

Just as the movie never loses sight of the fact that the Castlemans are a great team–albeit a dysfunctional one–Close believes people’s misdeeds shouldn’t negate their gifts. “If you have a great artist and all of a sudden you find out that he was a predator in some sense, does that negate his art? I will say it does not,” she says. “Because then you might as well empty out every museum that exists. We’re complicated, conflicted creatures. And that’s where things hopefully will settle down.”

Jonathan Pryce, who plays Close’s famous novelist spouse in The Wife, says the actor “scared the bejesus out of me in Fatal Attraction”
Graeme Hunter Pictures

Unlike Forrest or Castleman, Close has been married three times, to a musician, a financier and a biotech entrepreneur. She declines to elaborate on whether any of her unions were like the Castlemans’ but says her character reminded her of her mother. Close’s father “had a big dollop of narcissism, and my mom, who was a fascinating, incredibly capable woman, always was subservient to him,” she says. “She should have gone to college and been able to follow her curiosities. But my father never nurtured that in her.”

The strange childhood Close’s parents provided for her informed her life path. Her father was a doctor who left country-club Connecticut so the family could join a cultlike group known as Moral Re-Armament (MRA) when Close was 7. The family moved to a castle in Caux, Switzerland, and was largely separated. “I’ve always thought that was when my childhood ended,” she says. After a decade or so, her parents moved–without their kids–to what is now the Democratic Republic of Congo for 16 years, where her dad eventually became dictator Mobutu Sese Seko’s personal physician. “I think he might have been placed by the CIA,” she says. “I have yet to really find that out.”

When Close arrived at college, she quickly began to question many of the things she had taken for granted at MRA–including her first marriage, which soon dissolved. This distrust of her upbringing influences so much of how she approaches her work. She prepares exhaustively and asks a lot of questions, even about the route she takes across a room. “She needs to know what she’s doing in every detail, from where the glass of water should be to the meaning of the whole scene,” says The Wife‘s director, Björn Runge. “You had to really discuss it with her, because it’s important for her mind, but also her body, to believe what she’s doing.”

Life in a cult may have taught her other skills as well. Early in the movie, when the Castlemans get the fateful phone call from Stockholm, Joan gets on the other line to hear the news. As Joe is congratulated, the camera tightens in on Joan’s face. Nothing moves. But a dozen unreadable emotions swirl by. Is that pride? Dismay? Jealousy? Shock? Close’s ability to “feel as much as possible and show as little as possible,” as Runge describes it, is one of her greatest gifts, enabling her to play characters as diverse as an Irish woman posing as a butler in 2011’s Albert Nobbs, a ruthless litigator in the long-running TV show Damages and her second most recognizable role–at least among a certain set–Cruella De Vil in 101 Dalmatians. As her Fatal Attraction co-star Michael Douglas put it back in 1987, “She always looks like she has a secret.”

Close’s new role has set off Oscar sirens, just as her portrayal of Forrest did. She has been nominated six times and has never won, which means she has smiled into the camera and applauded someone else more than any other actor alive. This year may well be her turn, but being nominated for an Oscar requires campaigning–going to parties and lunches and special screenings–and Close, 71, isn’t going to do it. One of the advantages of age, she says, is knowing what makes you happy. “I know that I’m not naturally a spontaneously social person,” she says. “I’ve learned how to seem like one, which is important. But I am more often than not now saying if I’m not going to really enjoy it, I don’t think I’ll do it.” This includes taking selfies with fans, which Close won’t do after one fan whose hand she shook started to behave like a stalker.

“My mom is actually quite shy,” says Annie Starke, Close’s daughter, who plays the young Joan. “But she’s an incredible nurturer of those around her.” Close’s unsettled childhood made her determined to provide something more stable for her daughter, even though she and Annie’s father, the film producer John Starke, weren’t together. “When Annie turned 7 and she was in the same house that she came home to when she was born, that was a big deal for me, a very big deal,” says Close, who spends most of her time in Connecticut. “And the fact that she just got married in that childhood home has huge resonance.”

Close declined to visit the set while Starke was shooting, lest she distract her daughter. Starke was unaware that it was her mother who had suggested her for the role. “Björn came to me and said, ‘I’m having a hard time casting [young Joan],'” says Close. “I thought about it, and I just said …” She puts her hands over her eyes and speaks really fast: “Do you know that my daughter’s an actress?” (Starke still had to do several auditions and a screen test.)

If The Wife is an homage to her mother, Close’s life is another sort of tribute. “Near the end of her life, my mother said to me, ‘I feel I haven’t accomplished anything,'” says Close. “To me that’s desperately sad.” She has no such regrets–not anymore. “There was one time in my life when I’d wake up at 4 a.m. and all I could think of was the wrong decisions and mistakes I’d made,” she says. “It was deadly.”

Now she has come to terms with her challenges and wrong calls as well as her marriages. “I think humans die without connection, and the deepest connection you have is a connection with a spouse,” she says. Still, that doesn’t necessarily mean that women have to sacrifice everything for family–even if they can’t have a career exactly like hers. “Being a mother is different, I think, from having personal fulfillment,” she says. “It’s a great balance of life to be able to have both.” 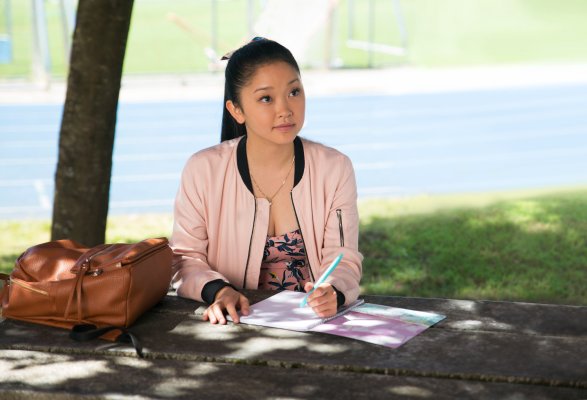 To All the Boys I’ve Loved Before Is the Perfect Millennial Take on Boy Meets Girl
Next Up: Editor's Pick