India is in the midst of a humanitarian crisis.

The country recorded 352,991 new cases of COVID-19 on Monday, breaking the record once again for the most cases recorded in a single day anywhere in the world since the beginning of the pandemic.

Hospital ICUs are overcrowded. There are shortages of oxygen for some patients with the most severe illness, of personal protective equipment (PPE) for those treating them, and of tests to detect the true extent of the epidemic.

Journalists stationed at crematoria in cities and towns say dead bodies are being burned in far higher numbers than the official statistics of around 1,900 deaths per day over the past week suggest.

People wait to cremate victims who died due to COVID-19 in New Delhi on April 23.
Danish Siddiqui—Reuters

Where India needs the most help

India’s health ministry says that the country has the oxygen it needs, but is facing bottlenecks in the transportation from facilities in industrial locations to hospitals where it is needed.

On Sunday the Indian government approved funds to set up 551 new oxygen generators at hospitals across the country. Special trains carrying oxygen, which is difficult to transport due to its high flammability, have also been sent to shortage-hit cities.

But there are other shortages, too. India is facing scarcity of critical drugs for treating serious cases of COVID-19 including Remdesivir and sedatives for patients on ventilators.

Authorities have warned that the shortages have been made worse by concerned citizens panic-buying. “Hoarding of injections like remdesivir and oxygen in homes is creating a panic and this hoarding is causing a shortage of these medicines,” said the All India Institute of Medical Sciences (AIIMS) on Sunday. The cost of a shot of Remdesivir on the black market has risen from some $12 to $600, the Economist reported. Extra supply would help ease such pressures.

There is also a shortage of hospital beds and, more importantly, ventilators needed to treat the most severely ill COVID patients. “India’s health system is on the verge of collapse,” said Ashish Jha, dean of the Brown University School of Public Health, in a Washington Post article Saturday, in which he called on the U.S. to help India set up field hospitals to increase the number of beds available.

“At this point medical supplies, oxygen and vaccines are the most important things we need,” says Yamini Aiyar, President of the Centre for Policy Research, a New Delhi think tank. “Multilateral aid will be crucial.”

Employees pack boxes of syringes on the production line at the Hindustan Syringes and Medical Devices Ltd. facility in Faridabad, Haryana, on March 11.
Anindito Mukherjee—Bloomberg/Getty Images

How are governments around the world helping?

Around the world, governments are waking up to the scale of the crisis. On Sunday the White House said it would begin sending more supplies to India, including ventilators, test kits and PPE. “Just as India sent assistance to the United States as our hospitals were strained early in the pandemic, we are determined to help India in its time of need,” President Joe Biden said in a tweet.

On Monday, an Air India plane carrying 328 oxygen concentrators, which pull oxygen from the air and pressurize it into higher concentrations for medical use, landed at New Delhi’s Indira Gandhi airport from New York.

The U.K., E.U., and even India’s longtime geopolitical rival Pakistan are among others that have also committed to sending supplies including ventilators and oxygen concentrators.

The White House also said it would overturn a ban on the export of raw materials used in vaccine production. “The United States has identified sources of specific raw material urgently required for Indian manufacture of the Covishield vaccine that will immediately be made available for India,” a U.S. National Security Council spokesperson said in a statement. In addition, the U.S. is also sending funds to BioE, India’s main vaccine manufacturer, with the aim of helping it produce at least 1 billion vaccines by the end of 2022, the statement said.

India is lagging much of the rich world in overall vaccination rate. More than 109 million Indians have received at least one dose already, but for a country with almost 1.4 billion people that’s less than 10% of the population. More than 41% of the total population in the United States have received their first dose.

At a facility on the outskirts of Chennai on April 24, workers check medical oxygen cylinders that will be transported to hospitals.
Arun Sankar—AFP/Getty Images

How individuals are trying to help

Although a crisis of this scale requires state intervention, people in India and around the world are using the internet to provide much-needed help to stricken families and on-the-ground aid groups.

As the virus swept through the country in recent weeks, many Indians took to Twitter to share the stories of people in need of oxygen, or ventilators, or a hospital bed, in the hopes of finding help online.

Many, like the journalist Vinay Srivastava who live-tweeted his final moments in need of oxygen, were unsuccessful.

Others have been sharing reputable organizations engaged in work on the ground in the hopes of encouraging those who can to support those efforts. Some of these organizations, like Give India, have hubs where you can choose to donate money to vetted funds for the purchase of life-saving medical equipment, food for families dealing with hunger, or reusable sanitary pads for women and girls who have gone without because of pandemic pressures. Each accepts foreign donations.

Activists have also compiled a Google Doc containing a long list of crowdfunders, including specific families in need, funds specifically targeted at alleviating the burden on minority communities, and mental health support for those impacted. (TIME has not vetted the donation details in this document.)

In a state of crisis, India needs as much help as it can get. And when continued spread means a higher probability of viral mutations arising too, helping India is not just a vital humanitarian decision: it’s one of the best ways to help the world beat COVID-19 for good. 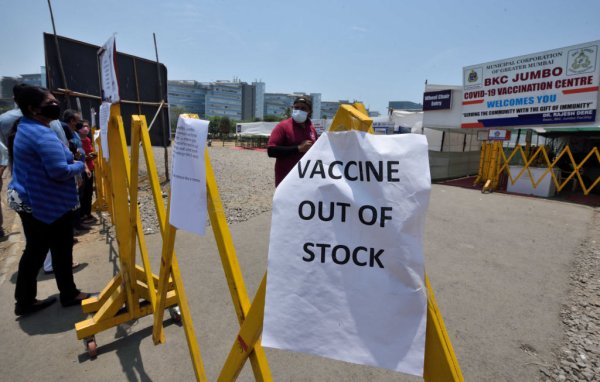 U.S. Sends Vaccine Supplies to India, but No Vaccines Yet
Next Up: Editor's Pick