These Are the Best Fantasy TV Show Adaptations to Watch Now

Netflix’s Shadow and Bone, which dropped on April 23, marks yet another hit fantasy book series getting inducted into the TV adaptation circuit—or rather, two series in one, as the new show creates one cohesive narrative out of storylines from Leigh Bardugo’s Shadow and Bone trilogy and the first book in her Six of Crows duology. The series, starring newcomers Jessie Mei Li, Archie Renaux and Freddy Carter, flies by over the course of eight episodes of magic, espionage, violence and romance—in other words, all of the necessary ingredients to satisfy a fantasy fan.

The good news for fans is that TV adaptations of fantasy series have become essential television in recent years, with more en route. (Look out for Amazon’s future Lord of the Rings show.) While we wait for season two of Shadow and Bone, however, here are the best fantasy TV show adaptations you can watch right now.

It’s been 10 whole years since Game of Thrones premiered on HBO, setting a widely-accepted gold standard for what a fantasy television adaptation can be (despite its more controversial elements). With its shocking plot twists, dark themes and giant budget, Thrones became a phenomenon and a cultural touchpoint. And while the scripts stumbled in later seasons—especially after they veered past George R. R. Martin’s published A Song of Ice and Fire works—the early seasons remain worthy of a rewatch, or first watch, for all fantasy book and TV buffs. (And there is, naturally, more Thrones in the works: HBO announced that a spinoff series set 300 years before Thrones, The House of the Dragon, began production in late April and is slated for a 2022 release.)

Watch it on HBO

Philip Pullman’s His Dark Materials trilogy (The Golden Compass, The Subtle Knife and The Amber Spyglass) may be young adult fantasy, but its topics of exploration—the concepts of original sin, parallel universes, fate and free choice, corruption of power—are not light. Nor do they exist on the usual binary of good vs. evil. First adapted as a 2007 movie starring Nicole Kidman and Daniel Craig, the new HBO TV version—renewed for a third and final upcoming season—stars Ruth Wilson, James McAvoy and Lin-Manuel Miranda. The show does not break new ground, but fans of the original story—or anyone who is curious about worlds where souls exist in animal form outside of the body—will find a layered story with tender performances.

Watch it on HBO

An obscure, dense Polish fantasy novel adapted to a hit video game—and then adapted again to an eight-episode Netflix series starring Henry Cavill in a long platinum wig: sure, why not? Cavill plays the titular Witcher, a non-human born to fight monsters in a magical, medieval world that draws heavily from European folklore of all origins. The show jumps between his gruesome exploits and the story of a powerful sorceress and a lost princess, the timelines coming together as the season progresses. More lighthearted than Game of Thrones—there’s a singing troubadour as comic sidekick in many scenes—The Witcher got mixed reviews, but each episode gets stronger as the season progresses, and ultimately satisfies the fantasy itch.

Lev Grossman’s The Magicians, a popular release when it came out in 2009, is often likened to a dark Harry Potter: misfit teens attend a mysterious magical school called the Brakebills University for Magical Pedagogy. But as both a book and a TV show, The Magicians is less interested in neat tales of good triumphing over evil, and much more interested in the dangers of greed, power and ambition. The SYFY show, which ran for five seasons before concluding in 2020, mixes teen drama, zingy humor and magical exploits—provided you’re OK with a storyline that also includes depictions of traumatic events.

Outlander is a romance first and foremost, Diana Gabaldon’s hefty books weaving the tale of World War II nurse Claire Randall and her love story with 18th century Scottish warrior Jamie Fraser. But time travel and some magically-inclined moments place it in the fantasy genre. The accompanying TV show, which has released five seasons and been renewed for two more to come, tracks the books closely. Claire’s adventures as part of the Jacobite revolution see her traveling from Scotland to France to the Americas; the mix of lush historical settings, supernatural elements, and that central love story have made it a cult favorite.

Canceled this year after two seasons, The Shannara Chronicles adapts Terry Brooks’s epic Sword of Shannara trilogy, a young adult classic. What you’ll find: elves, druids, humans and the occasional dwarf joined in a Lord of the Rings-style quest to save the world, or their slice of it, as a powerful living tree called the Ellcrys begins to die. Filmed in New Zealand, the landscapes are half the appeal; the comforting quest tropes and predictable, teen-friendly narrative make it a kind of comfort food for fantasy show connoisseurs.

The Vampire Diaries ran for eight seasons before concluding in 2017, but before it was a hit CW show starring Nina Dobrev and Ian Somerhalder, it was a book series from L.J. James that predated Twilight—and pop culture’s ensuing vampire obsession—by well over a decade. (The first book was published in 1991.) Taking place in the fictional town of Mystic Falls, VA, The Vampire Diaries explores the supernatural with a good dose of small-town Americana.

A Discovery of Witches

Like His Dark Materials, A Discovery of Witches makes its home on British soil: it starts out with a manuscript discovery at Oxford’s Bodleian Library, launching an unsuspecting witch on her quest to keep the balance between various supernatural beings—as one does. Based on the All Souls trilogy from Deborah Harkness, it recently aired its second season, with another on order. And there are vampires here too, specifically Matthew Goode as an erudite professor of biochemistry who just happens to have a penchant for blood and a soft spot for a witch. The forbidden love story is the selling point, but the mysteries around witches, vampires and demons give it a highbrow veneer.

Watch it on Amazon Prime Video

Neil Gaiman’s American Gods got the TV treatment in 2017 with this Starz adaptation of the 2001 bestseller. As the title suggests, the book (and show) mix an American setting with the battle between Old and New Gods: an ex-convict named Shadow discovers the more-than-human identity of his new employer, Mr. Wednesday, as they travel the country hobnobbing with mysterious characters. There’s another layer of social critique embedded in the text, too; the so-called New Gods are physical manifestations of modern society. (Gillian Anderson, for instance, appears as Media, the New Goddess of pop culture and television.) The show lasted three seasons, most recently airing in January 2021, before getting the ax.

Watch it on Hulu 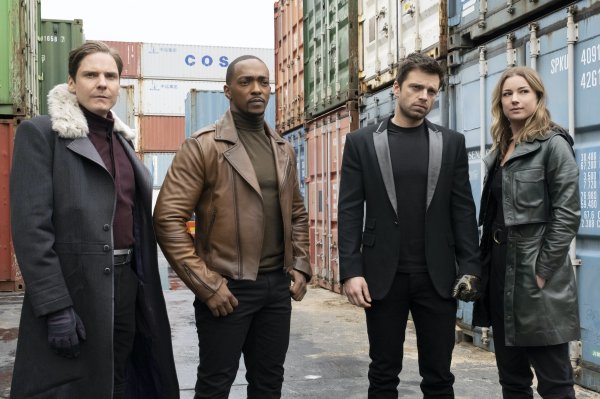 What's Next in the MCU After The Falcon and the Winter Soldier
Next Up: Editor's Pick