The Pandemic Has Been Tough for Extroverts. Here's How I Managed to Make Friends Anyway

Illustration by Alex Eben Meyer for TIME
Ideas
By Belinda Luscombe
Luscombe is an editor-at-large at TIME and the author of Marriageology: The Art and Science of Staying Together.

I did not start walking around my neighborhood to meet people. I went outside for the same reason Pleistocene-era humans did: air, food and cave-fever. But I also did not start walking around my neighborhood to not meet people. I understood the necessity and luxury of working from home, but I dreaded the dreariness. There are only so many new places to set up your computer before you get bored enough to start talking to the Roomba. I needed to find humans. Not just faces on screens.

The year 2020 will go down as a tough one for people who were elderly, who were young, who were children, who were parents, who had parents, who were grandparents, who lived alone, who lived with others, who were married, who worked from home, who didn’t work from home. But there’s one other group whose difficulties should not be ignored: extroverts. For a start, extroverts hate being ignored. And second, it has been a big shock for us outgoing types; until the pandemic, society was set up to favor those who liked group work. Nowadays our desire for human company can make us a menace.

Since I couldn’t have people over, I went to them. I took my raging inner social butterfly and started to say hello to anyone in my vicinity. One of the first was the mailman. He has been our mailman for years, but his workday and mine overlapped and I rarely saw him. Suddenly I was encountering him all the time, because: a) the pandemic has led to more deliveries, b) we are more likely to be home when they arrive and c) getting the mail now counts as an adventure. After a while, I learned his name was Archimedes.

Basking in the joy of knowing someone with a name as redolent of human history as Archimedes got me through at least three more days of homebound humdrum. Unfortunately for Archimedes, my name is nowhere near as memorable, and Archimedes talks to dozens of customers a day, whereas I know only one mail carrier, and his name is Archimedes. Every time I see Archimedes on the street, I greet Archimedes like an old friend and ask about his (Archimedes’) wife. Archimedes looks a bit stricken, like he just got out of the bath and found me waiting there before discovering either how to measure density or where his towel was. I want to say to Archimedes, “Don’t worry. You don’t need to remember my name; I’m an extrovert, Archimedes.”

I live in a part of New York City one writer recently described as “not a people place.” Less residential neighborhood than busy commuter hub, it has been particularly hard hit by the shift to work-from-home. Every month a restaurant that used to rely on workers buying lunch drops its gate for the last time: the fancy French-sounding bakery was the first to go, then several fast-casual outlets, the bar across the street, the Chinese takeout on the corner, eventually even pizza places and fast-food joints. Aside from the patisserie, I rarely frequented any of those establishments, yet I feel a twinge in my chest every time I see the padlocks. It’s like heartache, except for a vendor. (Is there such a thing as mart-ache?) I mourn the staff, the signage, the squandered entrepreneurial energy.

Somehow, the local Indian restaurant has survived, staffed six days a week by a young guy named Ram. As our dining options narrowed, and his customer options narrowed, we began to see each other a lot. Ram now knows our order, that we will pick it up late and that we don’t want flatware or napkins. But he also knows where we grew up, that we know a bit about cricket, that only one member of our family can tolerate spicy cooking. Recently he friended me on social media, which either means he’s readying himself for a post-restaurant career, or we’re getting to be pals. I want to ask him how he could possibly be earning enough from the restaurant when huge chains around him are getting the heck out of Dodge, but instead I just inquire if business is picking up. His answer is always the same: no, but we are hopeful it will soon. It’s hard to know if I keep going there for the tikka masala, which is delicious, or the optimism, which is even more nourishing.

Read more: During the Pandemic, I’ve Been Reaching Out to People From My Past. Here’s What I’ve Learned

On one of my excursions to Ram, I met Kenny. I have probably walked past him at least 100 times in my life; he’s the superintendent of a building nearby and he lingers around his doorway a lot. I regret the many years I did not give Kenny much thought, because he’s a lovely man with a beautiful spirit, but also because he’s an unstoppable gossip and knows everything that happens on his turf. Were there suddenly a lot of cops on the street? Kenny knows why. Did a store recently close down? Kenny will tell you how much the rent was hiked. Is there an unsightly stain on the sidewalk? Kenny will have the gory details. Kenny and I now have the kinds of arguments you can only have with people in the flesh, because on the Internet you’d be dismissed as a Nazi / communist / journalist. Are bike lanes a scourge? Is the mayor a disaster? Does a local business have the right to put parking cones on the street outside its door? (He’s wrong on all three.)

Unlike Kenny, who patrols a defined patch of ground, Elijah can be found up and down the street, sitting on his electric scooter, usually smoking. He lives in the building next door, but often sits under the scaffolding on ours. Not everyone welcomed his presence at first, but it didn’t take long to figure out what he was doing, that he was another member of the tribe extroversia, bored in his apartment, looking for fellow humans with whom to mingle.

Elijah’s front door is about 50 ft. from mine, but in many ways, he lives in a completely different world. He’s a survivor: of a difficult childhood, of abandonment, of addiction, of incarceration, of many physical fights, of divorce and of Brugada syndrome, an arrhythmia that could take his life at any point. I’m a survivor of sneaker wedges, elementary–school auction committees and my son’s discovery of men’s cologne. I don’t think I’ve ever met anyone who is as matter-of-fact as Elijah is about his mistakes and what they have cost or so uncomplaining about the tough hand he has been dealt.

Elijah is as unfamiliar with my way of living as I am with his; he told me he never expected to live in a neighborhood with millionaires. “We’re not that rich…,” I started to say, then stopped. It’s hard to explain my life to him, because all my gripes seem like gibberish. So we find other stuff to talk about. Elijah’s love for Tom Brady is pure and strong and rivaled only by Gisele’s, so I watched the most recent Super Bowl, even the parts between the commercials.

Many of the people I have met in the pandemic were familiar faces that I used to rush past in the morning to get to work and hurried by in the evenings to get home. But I also developed an unexpected rapport with this interesting young woman who lives in my house. I already knew her a bit, since I gave birth to her about two decades ago. She had left for college and had to return when the campuses closed. The child who moved out was perpetually indignant about something, usually me. The individual who moved back in was reasonable, charming and, astonishingly, sometimes laughed at my jokes. After a while I realized it was the same person; my parental fear and ambition had just temporarily clouded her from view—and perhaps skewed her perspective of me. She was not, after all, secretly intent on self-destruction, nor was she allergic to cleaning fluids, study or (microdoses of) advice. Occasionally, astonishingly, I laughed at her jokes too.

That’s the weird thing about the people you meet during a pandemic. They’ve been there the whole time. 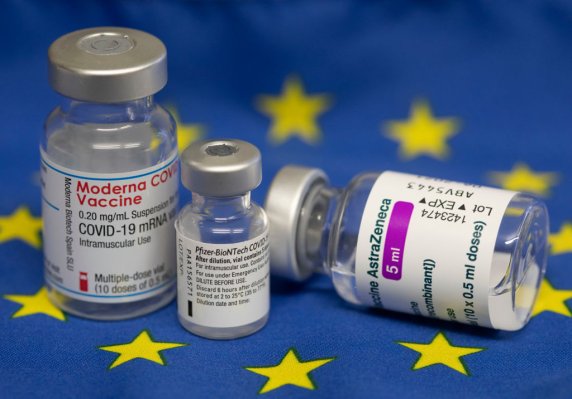 Will Trust in J&J COVID-19 Shot Recover?
Next Up: Editor's Pick