The Pandemic Has Meant I’m Rarely Away From My Children. Am I Still More Than a Mom?

I went on a walk with a friend the other day. He’s a writer. I am too. We were talking about books, which is our favorite thing to talk about. He’d come to meet me, during the three-hour break I get twice a week while my kids do “sports” with a couple of other kids in the park. When he got there, I was still watching the kids play and they ran over, asking me where I was going. They’re 8 and 6, but after months of lockdown and remote schooling in the face of COVID-19, as all my jobs have gone online, they’re no longer used to being separate from me–we’re no longer used to being separate from one another–and they both clung to me, wanting to know how long I’d be gone.

On the walk, I kept dipping back into mentions of my children: we were talking about a book and this somehow switched to a sad thing my 6-year-old had said about first grade. We were talking about teaching on Zoom and I began comparing it to online third grade.

When I teach, I sometimes tell small anecdotes to relate what we’ve been reading to more concrete mundane occurrences, a conversation overheard on the subway, an interaction or observation I had or made getting my coffee on the way. None of these experiences exist for me any longer; instead, when I reach for some moment to convey to my students, I more often than not come up with something about my kids, comparing existentialism to my daughter’s struggle with the seam in her sock, relating a novel’s frantic narrator to a tantrum.

I have a sense memory of a feeling that I used to have every weekday morning. At our kids’ school, the pre-K and kindergarten classrooms were in a basement; I would extricate our younger daughter from my leg outside her classroom, hand her off to her teachers, and then climb up the stairs and out the door into the day. The way my body felt then: I was often going to teach, going running, meeting a student to talk about their work. Sometimes, I would see a friend. I was moving through the world as something other than a mother, even, of course, as my children were somewhere in my brain.

And yet it feels right now that that way of being in one’s body, separate from one’s children, able to pretend at least a little while that we are more than just their mothers, has largely disappeared. There is not full time in-person school for many of us, but also, there are not dinners out with friends or with our partners. There are not commutes, sitting on the bus, in the car, silent, not quite mom but also not quite the person you are when you get to work.

A few weeks ago I left our apartment early on a weekend morning and ran over to a friend’s house. He put his mask on. We walked around his neighborhood. About an hour in I started to get anxious. I hadn’t been that far from them in months. “I feel like a nursing mother again,” I said to him, “the way my body gets confused when I am far from them.”

Physical space gives us more than a shift in location, it also, often, gives us the opportunity to shift the way and what of who we are. With so many fewer spaces accessible to us, we’ve also lost hold of parts of ourselves that depend on them for ways of being, for ways of breathing, for feeling at least a little removed from the obligations that we always have. I am never not my children’s mother when I am in my home–looking around to see if there’s laundry that needs folding, looking ahead, with more than a little bit of dread, to the next meal. I am never not worried about their schooling now that the regular spaces of school have been taken from them. I can still hear the questions that they ask their teachers. I remember suddenly that they need a flair pen and run out to hand it to them, even as I try to talk to a student, teach a class in the next room.

We’ve lost a lot these past eight months. So much of it concrete and quantifiable. But we’ve also lost all those spaces that function as release valve, as opportunities for being something other than the person that we are in our domestic spaces, even as we continue to pretend, as we continue to have to perform as if, we’re still those other people too. 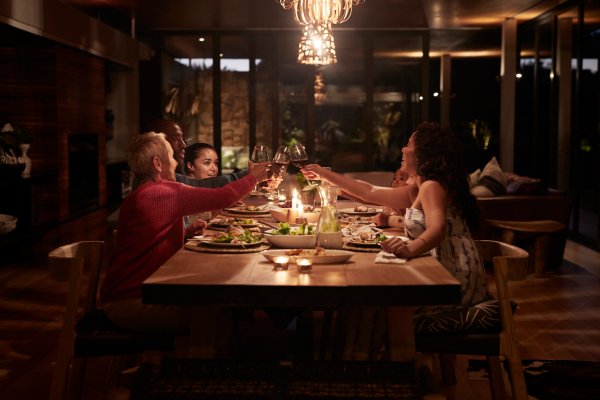 Can You Socialize Safely Indoors This Winter Amid COVID?
Next Up: Editor's Pick