The Alexandria slave trading facility once occupied by Franklin and Armfield, as it appeared after its liberation by Union forces during the Civil War. Library of Congress Prints and Photographs Division
Library of Congress
By Joshua D. Rothman

The brick townhouse on the north side of Duke Street was a handsome one. Three stories tall with a gable roof, twin chimneys, and blinds on the windows painted a pretty shade of green, it fronted directly onto the crude pavement near the western edge of Alexandria, Va., three-quarters of a mile from the crowded wharves and bustling warehouses clustered along the Potomac River. Duke Street was a busy thoroughfare. To the east, it ended at the river, and to the west it became the Little River Turnpike, a recently completed toll road that connected northern Virginia’s grain and tobacco farms to the port of Alexandria and, by extension, to the Atlantic economy.

In May 1828, John Armfield signed a multi-year lease, then placed an ad in the Alexandria Phenix Gazette: He had taken up residence in the house, he could be found there “at all times,” and he wanted to buy slaves. Looking “to purchase one hundred and fifty likely young negroes of both sexes between the ages of 8 and 25 years,” Armfield promised to pay higher prices, in cash, “than any other purchasers that are in the market, or that may hereafter come into market.” He signed the ad with the name of the company he and Isaac Franklin had created a few months earlier: “FRANKLIN & ARMFIELD.”

The slave trade was almost never simply a matter of a slaveholder selling enslaved people to a slave trader who took them somewhere else, sold them to another slaveholder, and pocketed the difference between the purchase price and the sales price. Every transaction entailed the interests and involvement of a world of actors, and the world became more far-reaching and elaborate as Armfield, Isaac Franklin and Rice Ballard, another trader who would soon join the company, forged a partnership and built their business together. In the late 1820s and early 1830s, the embryonic national exchange in Black bodies built by the first generation of professional traders grew sturdier and more intricate, and so did the array of individuals, institutions, governments, and infrastructures that supported it.

Between the 1820s and the 1830s, the number of slaves transported across state lines increased by 85%, reaching the point where white people forced the migration of nearly thirty thousand enslaved people, on average, from one state to another every year. Trafficking on such a scale was unprecedented in the United States, and it would never be matched again in American history. By the 1830s, the slave trade had metastasized into a series of overlapping and intersecting markets spread over hundreds of thousands of square miles. It was ubiquitous throughout the slaveholding portions of the country: along rivers and the coastline, in city streets and on country roads, in taverns and hotels, at county jails and on courthouse steps, in newspapers and on broadsheets posted to buildings and trees, in private offices and public auction houses, on docks and at ports and harbors. In truth, the incessant chatter among white people about prices, the endless reports of Black people once there and now gone, and the disquiet that the enslaved could never quite shake reminded them that wherever they were, the trade was there too.

Travelers in the 1830s reported that deteriorating agricultural production had made selling enslaved people the most reliable source of income for slaveholders in the Chesapeake. When illustrator and engraver Abraham John Mason, for example, visited the United States from England, he observed that Virginia’s “principal traffic now consists in raising slaves for the more Southern parts, becoming a complete slave nursery.”

Prominent Virginians acknowledged it too. Thomas Jefferson Randolph, grandson and namesake of the third president, lamented that Virginia had become “one grand menagerie, where men are reared for the market like oxen for the shambles.” But others saw an upside. Congressman Charles Fenton Mercer appreciated that Virginia derived “an annual revenue of not less than a million and a half of dollars . . . from the exportation” of enslaved people, as did Thomas Dew, professor of political law at the College of William & Mary, who considered the slave trade “an advantage to the state.” It only made sense for slaveholders “to encourage breeding” among the enslaved, Dew thought, because “Virginia is in fact a negro-raising state for other states.”

Cotton-producing regions of the country still stood out most among those “other states,” and the demand for slave labor there received new stimuli in the late 1820s and early 1830s. Most significant were the Indian removal policies of Andrew Jackson, who ascended to the presidency in 1829. Within a few years of taking office, Jackson engineered the mass expulsion of Native Americans from the lower South, opening new vistas for American cotton production, which increased nearly 40 percent in the first half of the 1830s. As the number of white fortune hunters soared, slave traders came to them with stolen people to pack onto their stolen land.

White people brought almost thirty thousand slaves into Louisiana during the 1830s, nearly 80 percent more than they had in the 1820s, and cotton production in the state increased 63 percent between 1826 and 1834. Sugar production increased by 150 percent as well. This was strikingly fast growth, and yet Louisiana was only the third-largest importer of slave labor in the 1830s. Bigger still was Alabama, and the twinned amplification of slavery and commodity crops in Louisiana and Alabama paled in comparison to their growth in Mississippi. In the early 1830s, federal deportation of the Choctaw and Chickasaw peoples yielded eighteen million acres of land there for white settlement, more than half the acreage of the entire state. Whites brought over one hundred thousand enslaved people into Mississippi during the 1830s, more than five times as many as they had in the previous decade, and the state’s enslaved population grew almost 200 percent. The cotton crop produced by the enslaved in Mississippi multiplied more than fourfold over the course of just eight years.

Massive influxes of capital and credit followed and fanned the development of the cotton and slave-trading frontiers. States experimented with chartering new kinds and larger numbers of banks. Investors from around the country and around the globe channeled millions into land and stock and bond ventures. The Second Bank of the United States, using federal money taken in mostly from public sales of Indian land, delivered over a third of its loans to the merchants, bankers, and planters of the lower South. In Mississippi alone, the number of incorporated banks grew from one to thirteen within a few years after 1829, and banking capital in the state increased tenfold. Everything at bottom was predicated on the labor and commodity value of enslaved people. Black bodies propelled the American economy toward the future.

The explosive growth of the domestic slave trade generated legal pushback, political backlash and routine defiance. Some white residents of the lower South had concerns about public safety, moral indignation swelled from increasingly vocal and organized antislavery forces, and the enslaved resisted in every way they could. But few of those things fazed Isaac Franklin, John Armfield and Rice Ballard. Perfectly placed to take advantage of the burgeoning prospects for slave traders, they wanted to push their position to its maximum. In the years to come, their company would become the largest of its kind in the United States, transforming the slave-trade industry, upending the lives of thousands of enslaved people, and leaving a lasting mark on the American economy and American society alike.

Excerpted with permission from The Ledger and the Chain: How Domestic Slave Traders Shaped America, available now from Basic Books. 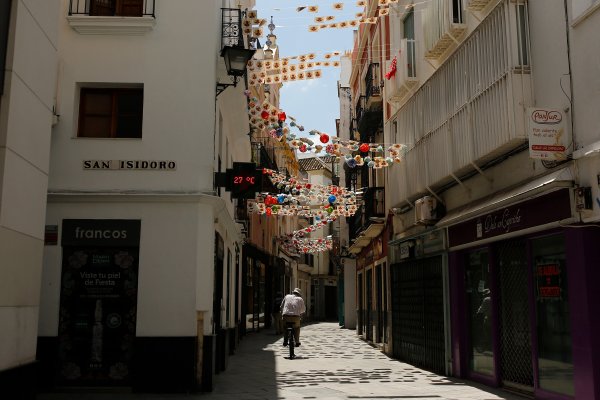 Spain Is Going to Trial a 4-Day Work Week. Could It Go Mainstream?
Next Up: Editor's Pick