The First Africans in Virginia Landed in 1619. It Was a Turning Point for Slavery in American History—But Not the Beginning

Engraving shows the arrival of a ship with a group of Africans for sale in Virginia in 1619
Hulton Archive/Getty Images
By Olivia B. Waxman

It was 400 years ago, “about the latter end of August,” that an English privateer ship reached Point Comfort on the Virginia peninsula. There, Governor George Yeardley and his head of trade, Cape Merchant Abraham Piersey, bought the “20. and odd Negroes” aboard in exchange for “victuals” — meaning, they traded food for slaves.

Such a trade, as described five months after the fact in a letter to the Virginia Company of London, had never before occurred in English North America, making this an ignominious milestone — and one that 400 years later is still surrounded by misconceptions and debate.

At the very least, 1619 represented a landmark in the long history of slavery in European colonies, and the beginning stages of what would become the institution of slavery in America. The New York Times this past weekend announced a special project devoted to its indelible mark on American society, and Hampton, Va., is commemorating the anniversary through Wednesday. Previously, on July 30, when President Trump spoke in Williamsburg, Va., to mark the 400th anniversary of Virginia’s General Assembly, he noted — in a speech boycotted by the Virginia Legislative Black Caucus, over Trump’s comments about black politicians — that it wasn’t long after that governing body first met that the colony saw “the beginning of a barbaric trade in human lives.”

The human cargo that arrived in Virginia in 1619 had come from the port city of Luanda, now the capital of present-day Angola. Back then, it was a Portuguese colony, and most of the enslaved are believed to have been captured during an ongoing war between Portugal and the kingdom of Ndongo, as John Thornton wrote in the The William and Mary Quarterly in 1998. Between 1618 and 1620, about 50,000 enslaved people — many of whom had been prisoners of war — were exported from Angola. An estimated 350 of these captives were loaded onto a Portuguese slave ship called the São João Bautista (more commonly known as the San Juan Batista).

That ship was en route to the Spanish colony of Veracruz when two English privateer ships, the White Lion and the Treasurer, intercepted it and seized some of the Angolans on board. According to James Horn, President and Chief Officer of Jamestown Rediscovery, both ships were owned by a powerful English nobleman, the Earl of Warwick Robert Rich. Rich was anti-Spanish and anti-Catholic, and profited from thwarting Spanish shipping in the Caribbean. The White Lion — which flew under the flag of a Dutch port known for its pirates — came to Virginia first in late August 1619, followed four days later by the Treasurer.

The most-cited account of those events in 1619 is found in that letter to the Virginia Company of London, which had run the Jamestown settlement since its establishment in 1607, from John Rolfe, one of the early English settlers there (and most famously Pocahontas’ husband).

Historians do not know much about the men and women who were sold to Yeardley and Piersey, or what happened to them, though some of their names have been revealed. Anthony and Isabella (sometimes spelled “Isabela”) stayed in present-day Hampton, Va., in an area then known as Elizabeth Cittie. They worked for William Tucker, a Virginia Company of London stockholder, and had a son also named William Tucker. Another woman who came off the Treasurer is identified as Angelo, and a 1625 census places her in William Pierce’s house in an area outside the James Fort city called New Towne.

A Turning Point, Not a Beginning

The people who came in August 1619 have been described as “the first Africans to set foot on the North American continent,” but that is incorrect.

For example, as historian Henry Louis Gates Jr. has pointed out, Juan Garrido became the first documented black person to arrive in what would become the U.S. when he accompanied Juan Ponce de León in search of the Fountain of Youth in 1513, and they ended up in present-day Florida, around St. Augustine.

In addition, Indigenous people — notably those of the 30-odd tribal communities led by Pocahontas’s father Powhatan — lived in the area that became Virginia long before Europeans or Africans got there. The English settlers enslaved indigenous people around the time of 1619, and some colonists later owned both American Indian and African slaves, says Ashley Atkins Spivey, an anthropologist and member of Pamunkey, the Powhatan chief’s tribe.

After the marriage between Pocahontas and John Rolfe, there was peace between the English and the Powhatan people, but relations started to deteriorate after her 1617 death. Those tensions would come to a head in a 1622 uprising, and later, the English sold their American Indian captives as slaves to the British colonies in the West Indies to pay for their wars with Indigenous people on the East Coast, according to Spivey. “People forget that there was a powerful Indigenous nation negotiating its own situation with the English in the year of 1619, and those descendants still continue to live today,” she says.

The 400th anniversary being marked this month is really the 400th anniversary of the Anglo-centric history of Africans in the U.S., says Greg Carr, the Chair of the Department of Afro-American Studies at Howard University. Dating the history of Africans in North America to 400 years ago “reinforces this narrative of English superiority.” But, he argues, remembering the Spanish and indigenous sides of the history is more important now than ever, as “the people [officials] are closing the border to are [descended from] people who were here when you came.”

“People don’t tend to want to think about early U.S. history as being anything but English and English-speaking,” echoes Michael Guasco, historian at Davidson College and author of Slaves and Englishmen: Human Bondage in the Early Modern Atlantic World. “There is a Hispanic heritage that predates the U.S, and there’s a tendency for people to willingly forget or omit the early history of Florida, Texas and California, particularly as the politics of today want to push back against Spanish language and immigration from Latin America.”

That said, something did change in 1619. Because of the central role of the English colonies in American history, the introduction of the transatlantic slave trade to Virginia is likewise central to this ugly and inescapable part of that story. In addition, the type of race-based chattel slavery system that solidified in the centuries that followed was its own unique American tragedy.

Today, Fort Monroe stands where the White Lion landed. The proclamation by President Barack Obama in 2011 that made the fort a national monument reads, “The first enslaved Africans in England’s colonies in America were brought to this peninsula on a ship flying the Dutch flag in 1619, beginning a long ignoble period of slavery in the colonies and, later, this Nation.” That proclamation validated research by Calvin Pearson, who runs a local history effort called Project 1619.

But despite the official recognition, debate remains over this history — down to the words best to use to describe it.

U.S. President Barack Obama (center) speaks after signing a proclamation to designate Ft. Monroe in Hampton, Va., a national monument on Nov. 1, 2011, in the Oval Office of the White House in Washington, D.C.
Pool—Getty Images

“I don’t like to use the word ‘arrive.’ I prefer landing. Arriving seems to indicate that they came willingly,” says Audrey Perry Williams, the Hampton Roads branch president of the Association for the Study of African American Life and History. She also feels that state curriculum standards, which now require teachers to discuss “the impact of the arrival of Africans and English women to the Jamestown settlement,” should make clear that the first enslaved Africans landed at present-day Fort Monroe in Hampton, Va., not Jamestown, though scholars disagree about precisely where events in this history took place, and whether the place more worth highlighting is the landing spot or where the people lived.

There are also some who argue the first Africans in Virginia should be classified as indentured servants, as laws on lifetime slavery — including the law that said children of enslaved mothers are slaves — didn’t start to appear until the late 17th century and early 18th century. Those on this side of the argument say the word “slave” wasn’t used at the time, citing a 1620s census that uses the word “servants.” Just as there were free black populations in Spanish and Portuguese colonies, there were some free black people in Virginia before the laws codified race-based slavery in the late 17th century; for example, Anthony Johnson owned land in the 1650s. Earlier this year, Virginia Governor Ralph Northam referred to the long history of racism in the U.S. as dating back 400 years to “the first indentured servants from Africa” landing at Point Comfort in an interview with CBS This Morning. But co-host Gayle King quickly added that their servitude is “also known as slavery,” and many observers agreed that “indentured servant” was in this case merely a euphemism for slavery.

Rolfe’s letter says the people were traded for food, indicating they were seen as property, and research suggests most of them were kidnapped, meaning they didn’t come to America willingly. On top of that, the transatlantic slave trade had been going on for about a century by August 1619.

“There’s pretty much overwhelming consensus here: there’s really no evidence to argue that the Africans were not envisioned as slaves,” says Guasco.

Some scholars also advocate reframing the story of 1619 so the emphasis is less on the trade that happened in Virginia and more on the horrifying voyage to get there — and what came after.

As Colita Nichols Fairfax, co-chair of the Hampton 2019 Commemorative Commission and professor at Norfolk State University, tells TIME, “Our children are not learning the human tragedy of enslavement. They’re only learning that they were brought here to work for other people. They’re not taught the human tragedy of being split up from the people you survived a harrowing journey with when you’re sold for food because you’re not seen as people. A woman named Angelo, who was purchased and worked in Pierce’s house, alone, no family. What was her experience like?”

So at the heart of the 400th anniversary being marked this week is a story of endurance, and of how people brought from Africa against their wills played an integral role in the American story. Their contributions ranged from vocabulary to agriculture to cuisine, including staples like rice that were a key part of the English colonies’ success. They probably also brought some Christian practices that they learned from the Portuguese Catholic missionaries in Africa. As the Internet has helped African Americans try to trace their roots back to the 17th century, interest in these aspects of the story is growing.

“We have to rethink the place of those Africans in history,” says Fairfax. “They are not just victims. They survived and contributed.” 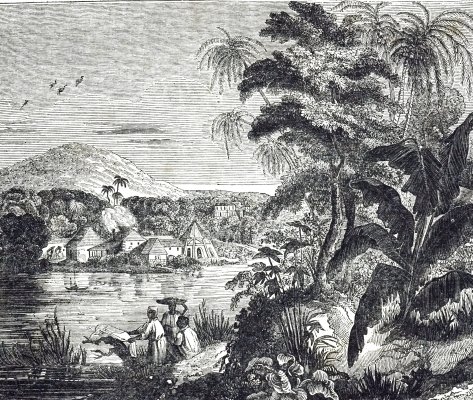 How One Man's Story Offers a New Way to Understand Slave Insurrection
Next Up: Editor's Pick