Like most African Americans, I come from a family with a history that includes generations of enslavement. But unlike most, the men and women who held my ancestors in bondage were not white, they were Native American—people who were themselves oppressed by the process that led to my family’s freedom.

I grew up in Northern California, in a small city called Hayward. My paternal grandparents had moved to the area in the 1950s, joining thousands of other Black families migrating in the midst of the postwar boom. But every few years, they would journey back to whence they came, to Oklahoma, for a family reunion.

And so I took my first trip to Ardmore, Okla., around the age of 10. While I loathed the dead bugs stuck in the air conditioning units of the cheap hotel rooms we often stayed in, I treasured our visits to Calvary Baptist church, the place of worship that Roberts family members from over 100 years ago had built with their own hands, and I gaped at the tombstones that marked the graves of my ancestors born in the 1800s. I knew it was special that I, as a descendant of slaves, knew exactly where I was from.

As I began tracing this history as part of a genealogical project that became a dissertation, and now a book, I’ve Been Here All the While: Black Freedom on Native Land, my family story brought me both great joy and bittersweet realization: The Robertses were rare Black landowners whose possession ran from the 19th century to today, but their land ownership came at the cost of becoming part of the larger turn-of-the-century dispossession of Native nations across the West.

The land that lay beneath Calvary Baptist Church and its cemetery, as well as beneath the small house that had housed my great-great-grandparents, had once been communally owned by the same people that had enslaved them—Choctaw and Chickasaw Indians. In fact, this land became ours through a process in which the U.S. Government attempted to completely eradicate the sovereignty of Native American nations and force Native people into living like white Americans.

As the slaves of Chickasaw and Choctaw Indians, my ancestors Ned and Jack Roberts and Lydia Jackson were forcibly removed from their Southeastern homes in the 1830s. Along with their owners, they embarked on a journey that we often refer to today as the “Trail of Tears.” Along the way, they faced sickness, death and malnourishment.

They arrived in a place known as Indian Territory, so named because it was meant to function as a repository of sorts for Native people who had been displaced from their homelands to make room for white settlers. Americans would supposedly never disturb their lives there.

In Indian Territory, the Chickasaws and Choctaws, as well as other tribes such as the Cherokees, Creeks and Seminoles, as well as the enslaved Black people in their nations, rebuilt and contended with the western Indian peoples who already lived in the region. Their investment in chattel slavery allowed some of the most influential members of these tribes to increase their wealth and maintain their participation in the cotton economy.

When southern states seceded, causing a Civil War in the United States, these slaveholding tribal members fought with the Confederacy, as others sided with the Union or tried to remain neutral.

After the war, the United States used the fact that some members of these tribes fought for the Confederacy as an excuse to extract land cessions from them; white Americans had turned their eyes farther west, and Indian Territory now looked like an attractive place for settlement. These land cessions were cemented in the Treaties of 1866, in which the five slaveholding nations also agreed to emancipate their slaves, give them all the rights of tribal citizens and provide them with land allotments. The same treaties that reneged on the United States’ promise to the Chickasaw and Choctaw Nations to never disturb them in their new western home, and which took even more land from them, provided my family with their land—making them part of the only group people of African descent in the world to receive what we might see as a form of direct, large-scale reparations from the federal government.

That land gave them a home, the foundation of a community and the ability to provide for themselves and their descendants. Their land also served as a beacon to thousands of African Americans from the U.S. South, who moved to Indian Territory hoping to settle nearby. This is how we get Black Wall Street, the amazing Black enclave razed in the 1921 Tulsa Massacre.

Yet, for many Native people, these same foundations represented only destruction—the destruction of many aspects of Native culture, like multigenerational living and communal land ownership, as well as the attempted destruction of Native governance.

As more Americans have become aware of the Tulsa Massacre in recent years, there has been an admirable push to learn more about and celebrate the landownership and economic success of Black Oklahomans. But how can we balance this rightful pride with the knowledge that it came at great cost?

As a historian, I start with acknowledgment of the full story: the Native slaveholders, the Black families trying to survive, and the transition from a Native territory to an American state, where both Black and Native people found themselves largely disenfranchised.

I still feel special because of my history. But I also want more people to know and understand the complexities of the region that the Roberts family called home.

Alaina E. Roberts, the author of I’ve Been Here All the While: Black Freedom on Native Land, studies the intersection of African American and Native American life; she is an assistant professor of history at the University of Pittsburgh. Follow her on Twitter @allthewhile1 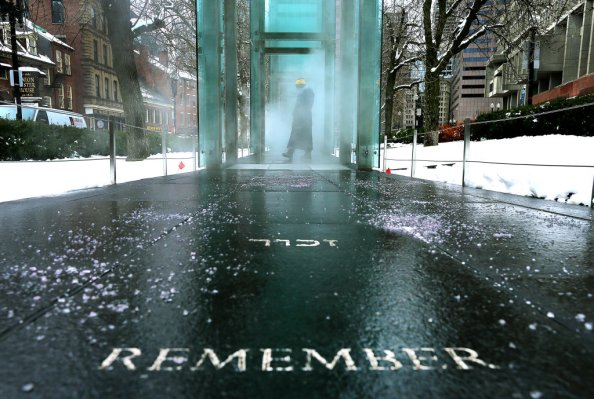 Holocaust Education Must Teach the Danger of Hateful Words
Next Up: Editor's Pick