"The fact remains that our nations were here before any Europeans came  ," says David Treuer.
Nisreen Breik
Ideas
By Lily Rothman
Lily Rothman is Assistant Managing Editor, Magazine, at TIME

When the Ojibwe writer David Treuer was growing up, he says, there were a few things that showed up in every Indian household he would visit: a Sears catalog, a Bible, a picture of John F. Kennedy and a copy of the book Bury My Heart at Wounded Knee, Dee Brown’s influential chronicling of 19th-century Native American history. But the contents of that book, famous as it was, proved complicated for him. The story it told was one that clashed, in important ways, with his own lived experience of reservation life and Native culture.

Americans of all backgrounds have recently had cause to revisit the place of Native Americans within national life. President Trump has invoked the terror of Wounded Knee to make fun of Senator Elizabeth Warren and a heightened dialogue continues over a stand-off between Covington Catholic student Nicholas Sandmann and Omaha elder Nathan Phillips on the National Mall last Saturday. But from Treuer’s perspective, thanks to centuries of history — and that famous book — many people are going about that thinking all wrong.

He spoke to TIME about Warren, the problem with tragic storytelling and his new book, The Heartbeat of Wounded Knee: Native America From 1890 to the Present.

You describe your book as a “counternarrative” to the 1970 history Bury My Heart at Wounded Knee. What was your reaction the first time you read it?

It was in every Indian household, but I didn’t read it until college. I remember feeling both applauded and eradicated. It tries to draw attention to a legacy of injustice, but on the other hand it says the massacre at Wounded Knee in 1890 was the point at which Indian culture and civilization died, period. I remember reading that as a student at Princeton, far from home, missing my tribe and thinking how preposterous it was.

You write that Indians “get ourselves wrong” in that sense, too — did you have an “aha moment” when you realized that?

I don’t know that there’s one. Growing up, my reservation was something to escape and I felt that way I think because I bought the story and I assumed the role of the sufferer. It was only when I was removed from it that I had a chance to look back at the place I was from and recognize that Leech Lake Reservation, my home, wasn’t simply where good ideas go to die, that there’s a richness and complexity to our lives that I hadn’t previously noticed.

What went into the decision to mix new reportage in with the history you’re recounting?

Since this book is not about Indian death, it’s about Indian life, I knew I had to talk to Native people in the act of living. I also felt strongly that I couldn’t ask them to share unless I was going to take a corresponding journey. It didn’t feel fair to hang people up and hide behind them.

Was there a specific misconception you most wanted to set right?

I was most interested to wean ourselves from the tragic mode. Tragedy in the Aristotelian sense is a story that elicits strong emotions and which leads to a moment of catharsis. That kind of narrative doesn’t serve us. People get to read and then feel like they’ve done some sort of social good. I guess I’m too much of a professor to relinquish the notion that the way we tell stories shapes what we see. The word shapes the world. If we only focus on the tragic past we’ll only see a tragic future. If we can use a different kind of storytelling method, if we can imagine ourselves differently, then we can be differently.

You make the case for defining Indian identity by relationship to culture, so what did you think of Senator Elizabeth Warren’s choice to take a DNA test?

I can understand the drive to want to put the issue to rest, but it didn’t put it to rest. Frankly what’s most interesting about Warren are her economic policies. Those are worth talking about. The fact that she grew up in Oklahoma hearing she was Native, that just makes her Oklahoman. She took a test, and it proved that she heard stories that were largely true. So what? The only reason it’s a story is because we’re continuing to bite the baited hook.

Your father was Jewish, a Holocaust survivor who came to tribal life from the outside. What perspective did he offer on these issues of identity?

He considered himself Jewish only insofar as he was persecuted. Their religion was socialism, not Judaism, in Vienna in his youth. And yet the experience of the Holocaust for them and the losses that they endured as a result of it made them keenly aware of their heritage and sharpened my father’s perception of where he came from. When he finally did come to the reservation, he described it as feeling like coming home after a lifetime of exile. It felt very comfortable.

That’s the tricky thing. Identities are always constructed, multiple and overlapping. Those are largely consciously made by us. Cultures, not so much. Culture is an inherited matrix of understandings and impulses and rules, like grammar. I always think about, in relation to both those things, Karl Marx’s quote where he says that all men make history but they don’t always make it as they please. That’s always good to imagine. We’re stuck making history with what we have.

You describe how we got to a place where Indians are fully American but also treated differently by the law. How does one balance that right to be different with a hope for being equal?

We don’t simply want equal rights—although we do want those, because we’re American citizens. It’s that and a recognition that we belong to sovereign nations which exist inside of the sovereign nation of the United States. [Other people] hear that we operate casinos or we have different laws regarding our rights to hunt and fish in our tribal lands, things like that, and often think of them as special rights bestowed upon us in payment for poor treatment. The fact remains that our nations were here before any Europeans came. What we have are the unbroken remnants of preexisting nations around which America has built itself. We have always reserved the right to form our own government and make our own laws. We gave people permission to settle here in exchange for recognition of our tribal sovereignty. If that troubles people, they can move.

Is full equality possible under those conditions?

Yes, and civil rights are important, but it’s the and, not the or. In that our struggle is like that of many Americans. Those things remain for many of us out of reach.

A lot of the power and rights that Indians do have now you trace to the period when the federal government forced Indian children into boarding schools, and how that brought people together. What’s it like to push back against the dominant narrative that that separation of families was solely harmful?

I’m probably only truly comfortable when I’m pushing back against a dominant narrative, but it was tricky. It would have been so easy for me continue to point out the ways in which the federal government tried to destroy us. My anger, my indignation, my hurt are real. My grandmother was taken from her mother when she was 4 years old and didn’t return till she was 10. She didn’t know what it was like to have a mother and it flavored her relationship with my own mother when she was a girl and in turn it flavored my relationship with my mother. That of course encourages me to point a finger back at the government and say, You did this. It’s harder to say, O.K., but what else happened? What did we do in response? Although those schools were intended to destroy Indian tribes by destroying Indian families, they resulted in a vast network of informed, healthy, strong relationships between previously atomized individuals. Those relationships were paramount in the efforts in the ’40s and ’50s to establish strong tribal governments, among other things.

What do you hope activists learn from the work of the American Indian Movement in the ’60s and ’70s, or from the more recent protests at Standing Rock?

They’re already doing it. I see protests the protests that continue to go on in Minnesota around pipelines, and I’m incredibly impressed. They’re such good students of history. They’re at the front line not just of Native protests but of a larger protest that highlights the fact that the struggle isn’t between pipelines and Indians, it’s between private enterprise and the common good.

After the recent Indigenous Peoples March in Washington, D.C., video of young men in MAGA hats surrounding an Omaha elder became a focus of controversy. Is there a lesson people can take away from the way that moment went viral?

The surface is ugly, but the depths are profound. We could focus on [the elder] Nathan Phillips. Despite what he’s been through—and I’m imagining it’s been a lot—with dignity and compassion and gentleness even, he stayed in the fight. In his example, I see a lot of what I was trying to communicate in the book: the ways in which Indians have not only endured America but endeavored always to make it better.

This past fall saw the election of the first two Native American Congresswomen, but also a Supreme Court ruling against the Standing Rock Sioux in a voter-ID-law case. What’s your outlook on Native participation in government?

The fight continues. What can I say?

A version of this interview, which has been edited and condensed, appears in the Feb. 4, 2019, issue of TIME 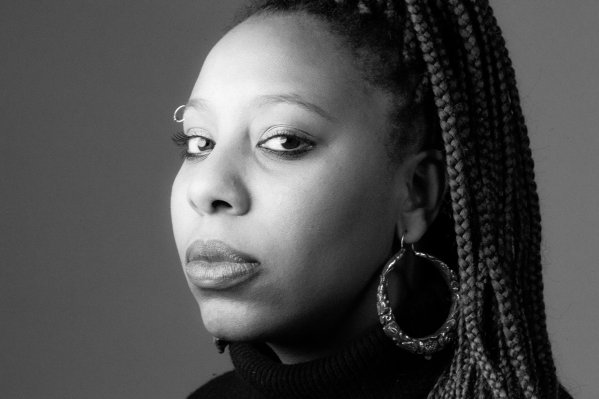 'We Are Still Here.' The Power of Showing Authentic Black Lives
Next Up: Editor's Pick