People touch hand-made caskets from Ghana, on Oct. 3, 2003, containing remains en route to an African burial ground in New York City. More than 400 caskets, containing the remains of the slaves, will be buried again after they were discovered during building construction in Manhattan.
Getty Images
By Bettye Kearse

The oral history of my family says that President James Madison, a Founding Father of our nation, was also a Founding Father of my African American family. In 1992, when I realized I knew a lot about how the president had lived his life but little about how his slaves had lived theirs, I took my first trip to Montpelier, Madison’s former Virginia plantation. I toured the mansion, the Madison family cemetery, and an excavated kitchen where it is likely one my enslaved ancestors once worked. But I elected not to see the slave cemetery. I was afraid my forebears had in death, as in life, been dishonored.

“Next time,” I promised myself.

It was just a few months later that I heard an NPR report about the recently discovered African Burial Ground in New York City. As the city and the nation processed that news, I began to follow and research the story—discovering that, while slave owners abolished many African customs, the sense of community as extended family, the importance of oral history, and the beliefs that guided the enslaved as they buried their deceased held strong.

In October 1991, the excavation crew for a new $275 million federal building on lower Broadway unearthed more than 400 human skeletons. These bones turned out to be the remains of a small fraction of the slaves who had built much of the city’s infrastructure, including the wall that once defined Wall Street. A review of 17th- and 18th-century land surveys revealed the site had been part of a 6.6-acre cemetery where the bodies of more than 15,000 black people rested, making it the oldest and largest known colonial burial site for Africans in North America.

Until the excavation, few New Yorkers, and even fewer visitors, knew that from 1711 to 1762, just two streets away from the current New York Stock Exchange, there had been an open-air market where African men, women and children were bought and sold. This busy and profitable market, second only to another in Charleston, S.C., helped spawn American capitalism and became pivotal to how money flowed throughout the world.

For varying periods throughout colonial history, every American colony had slaves. Stolen Africans were brought not only to grow cotton, sugar and tobacco in the South, but also to perform much of the hard labor needed to build towns, cities and railways. Raw crops produced in the South were transported to the North, or to Europe, to be turned into finished products, the sale of which was used to fund more trips to Africa for the capture and purchase of more slaves who were then trafficked to America to further its economic growth. This triangular trade route was astonishingly lucrative.

Through its burgeoning shipping businesses, insurance companies, sugar refiners and clothing manufacturers and retailers—supported by its equally burgeoning banking, accounting and investment firms—New York garnered some 40% of all the cotton revenue generated in the American colonies. And by investing in Southern plantations and military suppliers, New York City became so rich through the “peculiar institution” that in January 1861, on the eve of the Civil War, Mayor Fernando Wood proposed secession from the Union rather than lose cotton trade with the South.

In 1697, three centuries before the 1991 excavation, Trinity Church, located a few blocks away, banned the burial of “Negro’s” [sic] in its graveyard, thereby forcing the enslaved to find another place to inter their deceased. It was upon this second site, “the African Burial Ground,” the new federal building was to be constructed. When planning the structure, the United States General Services Administration assumed time and unrelenting massive urban development since the burial ground’s closure in 1794 had destroyed the human remains.

Early in 1992, when the city’s African American community learned of the discovery and the damage to skeletal remains caused by the excavation, the group mobilized and chose Trinity Church as the venue for a televised meeting. Among other community leaders who spoke, Rev. Herbert Daughtry reminded America: “Had it not been for the bodies and the bone, the body and the labor of those people who rest yonder—our ancestors—there would not have been a United States of America…”

Newspapers and television newscasts around the globe reported on the night vigils, the organized rallies, the spontaneous demonstrations, and the petitions and meetings. Many of the nation’s black citizens were enraged that their government would construct a building on top of their ancestors’ final resting place. Spiritual leaders of many faiths came to the sacred site, and the cause became a cry for human rights worldwide.

In October 1992, Congress passed a resolution to alter the building’s design in order to preserve the archeological site. The legislature then appropriated three million dollars for a museum and research center. That year, the African Burial Ground was added to the National Register of Historic Places, and in April 1993, it became a National Historic Landmark.

Yielding to indefatigable protests, the House Subcommittee on Public Works agreed to transfer the 419 exhumed skeletons to Howard University in Washington, D.C. Under the direction of Michael Blakey, an African American physical anthropologist, the bones were painstakingly labeled, catalogued and packaged. In November 1993, at a nighttime ceremony at the burial site, with hundreds of participants and on lookers, Blakey, wearing traditional formal African attire, accepted a small box. Wrapped in African fabric, it contained the last of the remains to be transferred.

At Howard’s Montague Cobb Biological Anthropology Laboratory, Blakey and his team analyzed the remains to learn the nature and extent of the brutality suffered by the black people who had been brought to New York from Angola, the Congo and the Caribbean. For nearly ten years, until the corpses were ceremonially reinterred in the Burial Ground, the researchers studied the bones, teeth and hair of the buried individuals and discovered almost half had been less than 12 years old when they died and more than half of these children had not reached their second birthdays. The children, like the adults, had suffered from malnutrition, injury, infectious disease, lead poisoning and overwork.

The remains, collected from a subterranean refuge under Wall Street, also told another story. Denied in life the chance to gain power, influence and dignity, the deceased were found meticulously swaddled in winding sheets secured with shroud pins and lying supine in individual coffins. Among the bones were many artifacts, including coins, buttons, bracelets, cufflinks and beads, to be used in the next world. A boy under the age of 5 lay silent with a clamshell above his left collarbone. In another photograph, a woman lay with her newborn infant nestled in the bend of her elbow.

In October 2007, the African Burial Ground was officially dedicated as a National Monument. Eight years later, in July 2015, the city itself made an effort to recognize the existence of its slaves and their descendants. New Yorkers and visitors walking along Wall Street might notice a free-standing 16-by-24-inch plaque installed a short walk away from where the 18th-century slave market once stood. The imagery of the city’s, and the nation’s, vast and powerful financial center sitting on top of the burial sites of its enslaved inhabitants projects an ironic view of the persistent racial inequalities in wealth and legal rights. The plaque will not make visible the invisible black people who, through their forced labor and self-sacrifice, carried New York City and the whole of America to prosperity and world eminence.

After learning about the burial practices of New York City’s enslaved people, I returned to Montpelier. As I walked along the dirt road that curved down from the mansion, I didn’t know what to expect. So, when I reached the slave cemetery, the bright blue periwinkles covering the floor of a small woods took me by surprise. I stepped in, and the ground, blanketed with fallen leaves and cradling the hidden remains, was soft underfoot. Crude quartz headstones had been placed on the west end of the graves, allowing, according to ancient West African beliefs, the souls resting below to follow the sun as it rose on the morning of life beyond death.

Standing in a kingdom of many trees, I felt one of them call to me. A stone the color of raw flesh, its uneven surface shiny and smooth, nestled at the base. I envisioned one of my enslaved ancestors lying there, wrapped in white muslin secured with a shroud pin. I knelt down and placed my hand on the rock, assured my ancestor had been buried with dignity.

Bettye Kearse is the author of The Other Madisons: The Lost History of a President’s Black Family, available now from Houghton Mifflin Harcourt. 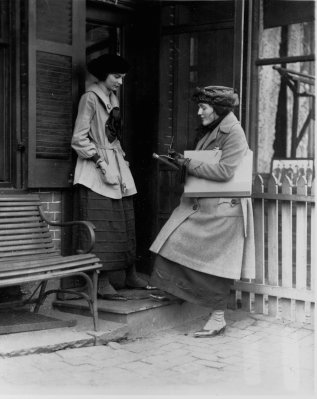 The U.S. Census Is a Window Into the History of Families
Next Up: Editor's Pick