Page one of the original Emancipation Proclamation is seen Jan. 19, 2003, at the National Archives in Washington, D.C.
Alex Wong—AFP via Getty Images
By Madeline Zehnder / History Today

Picture the Emancipation Proclamation, the Civil War-era executive order that changed the legal status of enslaved African Americans in secessionist states, and you might imagine a large broadside, perhaps nailed to a tree or held aloft by Abraham Lincoln. But one of the earliest editions of this document took the form of a thin, pocket-sized pamphlet, no bigger than a playing card. Commissioned by John Murray Forbes, a white entrepreneur and abolitionist, this edition was distributed in the South in hopes of recruiting Black men to fight for the Union Army.

Forbes served as a Union recruiting agent throughout the war and was an early advocate for the military inclusion of Black men, who were barred from serving in combat roles until the Emancipation Proclamation lifted the ban on Jan. 1, 1863. Lincoln had initially feared that recruiting Black soldiers would alienate slaveholding states that remained loyal to the Union, while many Union officers claimed African Americans were too undisciplined for combat. It was even thought that mustering Black regiments would bring about a second Haitian Revolution, which, at the start of the 19th century, had established an independent Black nation. Forbes, however, was convinced that involving Black soldiers was essential to the war’s progress and, along with others, including Frederick Douglass, lobbied federal officials to change their minds.

Following the issue of the Proclamation, Forbes rushed to publish his own edition, which newspapers described as printed “in tiny book form and with attractive covers.” With the support of Massachusetts governor John Andrew, Forbes sent packets of his miniature editions to Union officers stationed in the South, instructing them to “introduce the proclamation amongst the slaves wherever opportunity offers.” Small, lightweight and bound in eye-catching pink paper, Forbes designed his editions for the broadest circulation possible.

He also designed them to recruit soldiers. At Forbes’ request, the tiny pamphlets featured a quote from former president Andrew Jackson on their back cover. Taken from a proclamation Jackson wrote a few months before the War of 1812’s Battle of New Orleans, the quote declares:

Forbes’ choice to reprint Jackson’s words reframed the Proclamation as a call to arms. While the Proclamation itself states merely that “such persons of suitable condition, will be received into the armed service of the United States.” Jackson’s language “summons” readers to “rally around” and “defend” the nation.

By choosing this passage, however, Forbes hailed Black readers not as fellow citizens but as subjects who owed the nation their support. In contrast to anti-slavery activists such as Douglass, whose own recruiting material urged Black men to fight for “liberty” and “the dignity of our manhood,” Forbes’ pamphlets recast freedom as a gift that formerly enslaved men ought to answer with the “faithful return” of their labor.

Yet with their tiny size, the pamphlets were radical in spite of Forbes’ framing. In Southern states, including North Carolina, where state law declared that “to teach a slave to read or write, or to sell or give him any book, or pamphlet, is punished with 39 lashes,” the very act of carrying the miniature Proclamation could be a powerful personal statement of freedom.

In South Carolina, formerly enslaved people received copies of the Proclamation directly from the hands of men serving in the 1st South Carolina Volunteer Infantry Regiment, an early Black regiment whose white commander, Thomas Wentworth Higginson, received a “large printed supply” of “the President’s Proclamation” from Governor Andrew. Even for non-readers, the sight of Black soldiers distributing print to other Black people in a state that criminalized the teaching of reading to the enslaved summoned up a future shaped by the possibility of increased self-determination, literacy and education.

In the years that followed, other pocket-sized books would come to serve as material signs of independence for Black men who joined the Union army. To quote Edwin Wheeler, an African Methodist Episcopal minister who served with the 80th US Colored Infantry, Black soldiers “regarded their books as an indispensable portion of their equipment. [T]he spelling book and the cartridge-box are generally attached to the same belt.” Worn alongside a soldier’s cartridge box and bayonet, pocket-sized books offered another kind of weapon in the fight for freedom and equality. Although Forbes’ miniature Emancipation Proclamations may have been the first books that some formerly enslaved soldiers held in their hands, Black soldiers like Wheeler made certain that these books were not the last. 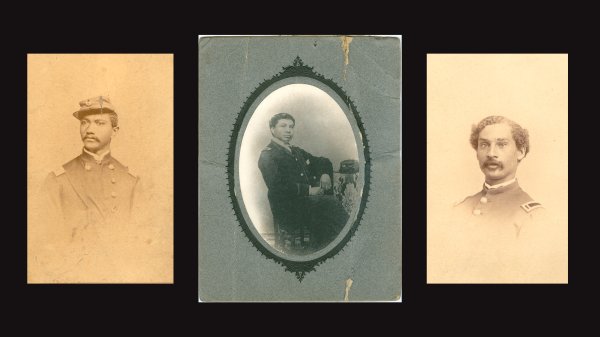 The Story Behind Rare Photos of Black Civil War Surgeons
Next Up: Editor's Pick