There was a time, not so long ago, when to describe a television show as Dickensian was to pay it the highest possible compliment. The Wire is the classic example, weaving dozens of vividly wrought characters into an intricate, socially astute epic of systemic rot in Baltimore. But peak TV, for all its individual highlights, tends to debase every marker of prestige it touches through infinite imitations. And so now we have an overabundance of bad-to-decent series—Penny Dreadful, Carnival Row, The Irregulars and even, perhaps inevitably, Dickensian—whose parallels to Dickens are thuddingly literal, from their late-19th-century London settings (or alternate-universe facsimiles of same) and huge casts of characters to their fascination with people living at the margins of society and fusion of gritty realism with elements of fantasy. I call this stuff Dickenscore.

The latest and most anticipated iteration is HBO’s The Nevers, premiering on April 11. Created by Joss Whedon, who exited the show in November amid accusations of workplace harassment that have continued to escalate in the intervening months, it is—in its expensive, confusing mediocrity—Dickenscore to the max. (So far has the once-beloved Buffy the Vampire Slayer mastermind and Marvel fixture’s stock fallen that he is credited as creator, director, writer and executive producer of the show’s pilot but is barely mentioned in recent press materials.) Set in 1899, three years after a supernatural event that momentarily stopped Londoners in their tracks, it follows a cohort of locals, mostly women, who have since developed an array of strange abilities. Though referred to by any number of rude names, they prefer to be called, awkwardly, the “Touched.”

To the extent that there is a center to this overcrowded story, it’s an orphanage run by Amalia True (Laura Donnelly of Outlander), a widow gifted with an aptitude for combat as well as sporadic clairvoyance, and her deputy, Penance Adair (Ann Skelly from Vikings), an inventor light-years ahead of her male contemporaries. (One early action sequence peaks with the women escaping in a very small, very silly-looking homemade car.) Less a home for actual wards of the state than a safe harbor for the Touched of all ages, the place hosts a menagerie of female misfits. There’s a girl who spontaneously speaks in foreign languages and a girl can make plants spring up simply by touching soil. Primrose (Anna Devlin) is, by her own description, “large”—think Alice after she eats the wrong cake in Wonderland—and looks as though she’s been cut and pasted into every scene where she appears. Also within True’s circle of trust are her friend Mary (Eleanor Tomlinson), a chorus girl whose supposedly gorgeous but unintentionally comical ululations can only be heard by other Touched people, and Horatio (Zackary Momoh), a doctor who emerged from the supernatural occurrence in 1896 with otherworldly healing powers.

The few men who’ve been Touched all seem to be outsiders of some sort. Horatio is an African immigrant, and there are hints that queer men might also number among these “deviants.” At any rate, no rich, powerful, ostensibly straight white guy has come forward with the ability to bring a teapot to boil in the palm of his hand. So, of course, the powers that be are getting nervous. But it isn’t just the cabal of old men who run the government who’d like to control or destroy the Touched. Also converging on them are an unhinged murderess known as Maladie (Amy Manson), a mad-scientist type (Denis O’Hare), a crime boss (Nick Frost) and various demonic hench-monsters.

At his best, in projects like Dollhouse and Cabin in the Woods as well as Buffy, Whedon excels at giving viewers their sci-fi and horror thrills while also critiquing the retrograde tropes of identity and power those genres often reproduce. (This makes the accusations of racism and sexism against him especially depressing.) The Nevers is ripe with metaphors of its own, about technological advances, economic inequality and social justice at the dawn of the Machine Age. Sadly, this time, Whedon doesn’t allow these themes enough time to develop organically. Within the show’s first 15 minutes, there’s a stuffy, aristocratic man warning his fellow masters of the universe: “We are the first generation accustomed to the impossible. What women are appalled by today, they will accept tomorrow and demand the day after that. And the immigrant. And the deviant. That is the power being wielded—and not by us.” I mean, what’s left to say after that?

Maybe nothing. Which would explain the decision to throw in a tangentially connected subplot surrounding a louche, bisexual playboy, Hugo Swann (James Norton), who operates what one friend calls a “pagan sex club.” (We know Swann likes men and women because the first time we see him, he’s slipping out of a bed where he’s slept surrounded by one of each, to kickstart his day with some cocaine. Though his name comes from Proust, this character’s story line might be understood as Wildecore.) As far as I can tell, this stuff mostly exists to fulfill the condition that if an HBO series isn’t going to be great, it must at least meet an episodic quota for sex. I’ll take gratuitous debauchery over gratuitous gore, of which there is also plenty here, any day. In this case, though, it adds too many elements to a story that already encompasses fin-de-siècle London’s rich pageant. The high ratio of female-to-male nudity also meshes a bit oddly with the girl-power premise.

There might have been a way to salvage such an unwieldy plot, so that a show whose dialogue, production values and acting (especially Donnelly’s lead performance) are above average for Dickenscore could at least hold viewers’ attention, the way the even-sillier Irregulars does. But the incomprehensibility of storytelling that barely allows time for us to register a character’s existence before moving on to a new set of faces, ensures that The Nevers is rarely fun. You shouldn’t have to watch a series premiere twice, as I did, just to get a basic sense of who’s who. (I’ve mentioned fewer than half of the named characters in this review.) This information overload is becoming a common problem for genre shows, whose early episodes are crucial for fleshing out a world that isn’t exactly our own. On top of the character dumps, they give us prolonged fight scenes, cool superpowers, bare breasts—enough distractions that we hopefully forget to look for a story worth telling. There is a lot going on in The Nevers. The only thing it seems to lack is a point. 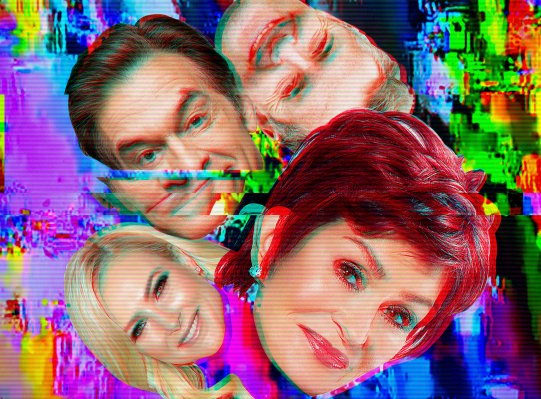 TV Is Having a Talking-Head Crisis, From Sharon Osbourne to Dr. Oz to Meghan McCain
Next Up: Editor's Pick