Review: An Underwhelming Justice League Is Desperate to Impress

Is it possible for a clotheshorse to have too many shoes, or a music fan to have too much Bob Dylan vinyl? Those are questions no one has been able to answer adequately, and now we also have this one: Is there such a thing has too many superheroes for one movie?

If you happen to like a lot of superheroes in your movie, particularly DC ones, Justice League might be the picture for you. As the story opens, we’re reminded that Superman/Clark Kent (Henry Cavill) is dead: He met his demise saving the world, now a bleak, somber place. Batman/Bruce Wayne (Ben Affleck), the Man of Steel’s nemesis-turned-partner from 2016’s Batman v Superman: Dawn of Justice, feels bad about his friend, and about stuff in general — so what else is new? He’s decided to locate and gather a bunch of other superheroes — Jason Momoa’s burly swimmer Aquaman/Arthur Curry, Ray Fisher’s cybernetically enhanced former athlete Cyborg/Victor Stone, Gal Gadot’s Amazonian repository of calm and common sense Wonder Woman/Diana Prince and Ezra Miller’s zippy awkward adolescent The Flash/Barry Allen — with the aim of defusing three magic boxes whose contents have the power to destroy the world. These boxes are the province of one master villain in an imposing winged metal headdress, Ciaran Hinds’ Steppenwolf, who, with his furry double-pointed hippie beard, looks like he was actually in Steppenwolf.

But Justice League is no magic carpet ride, no matter how hard it strives for multi-superhero awesomeness. The film was directed, mostly, by Zack Snyder, who opted to leave the project in May to deal with a family tragedy; Joss Whedon stepped in to guide the movie through post-production and shoot a few additional scenes. Where to lay the blame for Justice League’s just OK-ness? The movie is a jumbo-sized blur — not terrible, just underwhelming even amid its desperation to impress us — but that’s probably neither Snyder’s fault nor Whedon’s. Each superhero’s personality emerges distinctly, as if accompanied by a checkmark: Affleck’s Batman stomps around looking suitably morose and pissed off. Momoa’s Aquaman is just a bundle of wounded male pride, with stupendous pectorals. (Actually, stupendous pectorals seem to be a prerequisite for all the full-grown Justice League dudes.) There’s lots of action, elaborately staged in that now business-as-usual CGI way: You won’t go home hungry to see superheroes flying around boldly before being flung to Earth, smote by Steppenwolf’s fists of fury. In fact, you will have seen enough of that to last you a dozen lifetimes.

It’s just so damn hard to care about the story. The screenplay, by Chris Terrio and Joss Whedon (from a story by Terrio and Snyder), is probably no worse or no better than most other comic-book-movie screenplays. Don’t expect the cataclysmic gloominess of Batman v Superman, or even the shrill, neon-hued faux nihilism of Suicide Squad. Justice League features plenty of jaunty banter: The DC-superhero-movie brigade apparently got the memo that wisecracking humor, a la Marvel’s Guardians of the Galaxy subfranchise, is what all the kids are clamoring for these days. You will have ample opportunity to chuckle knowingly, if that is your desire.

Still, there are some pleasing moments in Justice League: When Cavill’s Clark Kent/Superman finally reappears — you didn’t really think he’d stay dead, did you? — we get to spend a few minutes with, you know, actual nonsuperhero women, like Amy Adams’ sexy smartie Lois Lane and Diane Lane’s touchingly careworn Martha Kent. They breathe some air into the movie, and Cavill — unlike Affleck — wears the heavy mantle of heroic masculinity with surprising lightness. Justice League also ensures that just about everyone’s love affair with Gadot’s Wonder Woman will continue: Her smile alone, winsome and brainy, is enough to jolt the movie out of its dudecentric torpor. And as The Flash, Miller is the kick in the pants you didn’t see coming. He doesn’t just move fast; he speaks in ADHD spirals that almost no one — except probably Wonder Woman, because she’s truly the smartest — can keep up with. He’s the squirrelly parenthetical to Justice League’s big, booming topic sentences. And somehow he helps keep the movie grounded, even though his feet barely touch Earth. 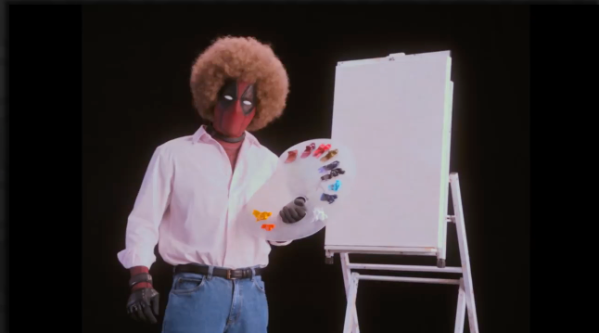 The New Deadpool 2 Teaser Is a Trippy Ode to Bob Ross
Next Up: Editor's Pick