The trial of Derek Chauvin, the former Minneapolis Police Department (MPD) officer charged with the murder of George Floyd, is set to begin on March 29 in Minneapolis. The trial comes nearly a year after Floyd’s death sparked global outcry over police brutality and racial injustice.

On May 25, 2020, Floyd died in police custody after Chauvin and three other MPD officers were called to a deli where he was being accused of using a fake $20 bill. Viral video showed Chauvin kneeling on Floyd’s neck for more than eight minutes as Floyd cried out and repeatedly told the officer he couldn’t breathe. Floyd died later that evening at the hospital. After days of protests in Minneapolis and other cities, all the officers involved were arrested on May 29.

Read more: Why The Killing of George Floyd Sparked an American Uprising

The case is being prosecuted by Minnesota Attorney General Keith Ellison, with Chauvin represented by Minneapolis-based attorney Eric Nelson. The trial is expected to last between two and four weeks.

What are the charges?

Members of George Floyd's family visit the site where he was killed last year on March 12, 2021 in Minneapolis, Minnesota.
Stephen Maturen—Getty Images

The 3rd-degree charge was reinstated by Judge Peter Cahill, the presiding judge in the case, after the Minnesota Court of Appeals ordered him to reconsider it consistent with other cases in which it had been applied. Cahill had previously dismissed the charge, explaining that he felt there wasn’t enough evidence to show that Chauvin’s actions put multiple people at risk.

Who is on the jury?

The jury selection process started on March 9 and has moved at a pace quicker than anticipated. All 12 jurors had been selected by March 22, as well as three alternates. According to Minnesota Public Radio, the jury is comprised of three Black men, one Black woman, two multiracial women, two white men and four white women.

In recent weeks, the racial makeup of the jury has been a topic of discussion; after the defense struck a Black prospective juror who spoke of experiencing racism himself and criticized Minneapolis’ police department, civil rights attorney Nekima Levy Armstrong told the Associated Press that the decision “underscores why people believe there is systemic racism at work within these judicial processes.” (The defense team cited the man’s negative opinion of the police as disqualifying and was not challenged.)

Read more: It’s a ‘Nightmare Being Replayed’ as a Cop Faces Trial in George Floyd’s Death

On March 17, Cahill dismissed two previously seated jurors because they said news of a $27 million civil settlement the Minneapolis City Council had negotiated with the Floyd family, which was announced on March 12, made it hard for them to believe that Chauvin was innocent.

Joe Margulies, a Cornell law professor who previously worked as a criminal defense attorney in Minneapolis, believes the announcement could also “hurt the prosecution” and questions why the city would make its announcement during jury selection.

“It’s a wildcard and you don’t know how it’s going to affect the jury. All you know is that it has the potential to distort [their] deliberations,” he tells TIME, adding that it could give Chauvin’s defense an avenue towards an appeal.

Who could be called as a witness?

Many witnesses are expected to testify, including Minneapolis police chief Medaria Arradondo, county medical examiner, Dr. Andrew Baker, and Darnella Frazier, the teenager who filmed Chauvin kneeling on Floyd’s neck. There will also likely be a number of expert witnesses testifying for both the prosecution and the defense.

Earlier this month, the prosecution announced plans to include some of Floyd’s friends and family members as “spark of life” witnesses. The state of Minnesota allows for this kind of testimony to humanize a crime victim for a jury.

Why is it so rare for police officers accused of brutality to face legal consequences?

“These cases are always harder than they look,” Margulies says. “You look at the video [of Floyd’s death] and you think ‘this has to be a layup for the prosecution’ but they never are.”

In many cases that seek to litigate police conduct, there is a certain level of ambiguity at play. Long before any such incident is brought to trial, police officers accused of excessive force are usually afforded the benefit of the doubt both legally and culturally; an officer can explain away their behavior by saying that an individual was non-compliant, or threatening, or could have been threatening; that they were “reaching” for a weapon, or had one on their person, or were believed to have had one. All of these potential justifications raise hurdles for prosecutors to overcome.

When a police officer’s actions have left the other individual (or individuals) dead, there is often little evidence to challenge the officer’s perspective. Floyd’s case is noteworthy, among other reasons, for the footage shot by Frazier—and for material captured by other officers’ body cameras, which is not always available despite growing calls for officer body cameras to ensure greater police accountability.

Demonstrators hold a vigil in honor of George Floyd on March 8, 2021 in Atlanta, Georgia. Jury selection was paused today in the trial of former Minneapolis police officer Derek Chauvin, who is charged in Floyd's death.
Megan Varner-Getty Images

“Our society tends to be more sympathetic to the police,” says Daniel Nagin, a public policy professor at Carnegie Mellon. “Part of that sympathy comes from them having a very dangerous job.” In just a few examples thereof, investigations, to the police killings of Michael Brown in 2014, Jamar Clark in 2015, Alton Sterling in 2016, and Stephon Clark in 2018 all ended with no charges filed against the officers involved.

Even when a killing by a police officer leads to a criminal trial, jurors are more willing to accept the word of officers over a competing or oppositional narrative. (In Chauvin’s trial, the defense is expected to argue that Floyd’s death was the result of toxicants found in his bloodstream during an autopsy, for example, rather than from the knee that Chauvin had on his neck.)

Read more: Why Police Trials For Civilian Killings Are So Rare

There are widespread concerns that, if Chauvin is not convicted, Minneapolis will again erupt in protests. The city has already put up more than $600,000 in barriers around city buildings and police stations in case of unrest.

Chauvin’s arrest was “100% performative,” Oluchi Omeoga, a Minneapolis-based activist with the Black Visions Collective, tells TIME. “There was a lot of external pressure… I thought it was more symbolic than anything else. Changes come from completely changing the system.”

Omeoga, who has little faith in the trial’s outcome, says that the time since Floyd’s death has been a year of community and coalition building. “My job as an organizer is to help our older folks and younger folks dream of a world that does not exist yet,” Omeoga explains. “We’re trying to create something that has never existed in our lifetime.” 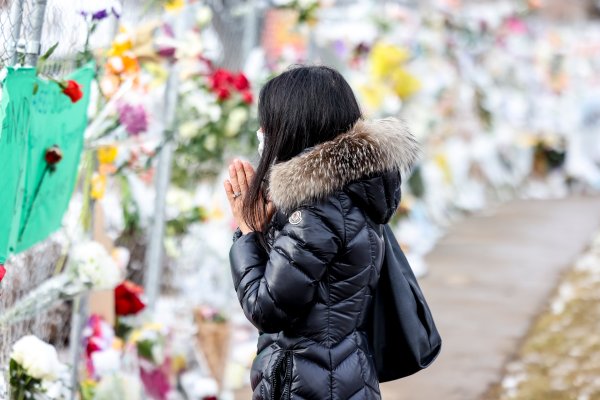 Do Mass Shootings Mark a Return to 'Normal'?
Next Up: Editor's Pick