A Louisiana family was grieving Wednesday after police in Baton Rouge fatally shot Alton Sterling, a 37-year-old black man, in an encounter that was largely captured on video and raised widespread concerns about the officers’ actions. Here’s what you need to know about Sterling’s death:

What happened?
Sterling was killed early Tuesday while two officers had him pinned to the ground of a parking lot outside of a convenience store, according to graphic videos of the incident captured by an unknown bystander.

The encounter occurred when the officers were dispatched to Sterling’s location outside the store after Baton Rouge Police Department received a disturbance call after midnight. A caller told a dispatcher that a black man in a red shirt who was selling CDs had threatened him with a gun. “An altercation between Sterling and the officers ensued. Sterling was shot during the altercation and died at the scene,” the police department said in a statement.

The footage appears to show two officers approaching Sterling outside of a convenience store. One officer appears to tackle him over the hood of the car, and then both pounce on him, apparently to restrain him on the pavement. At one point, a voice can be heard yelling, “He’s got a gun! Gun!” Gunfire erupts moments later. Another video, provided by the Daily Beast, surfaced later Wednesday and shows the shooting from another angle.

Why was Sterling shot?
It’s unclear what led the officers—identified as Blane Salamoni and Howie Lake—to open fire on Sterling.

The owner of the convenience store, Abdul Muflahi, who knew Sterling, told local media outlets that he never saw Sterling reach for a weapon.

Baton Rouge Police Chief Carl Dabadie Jr. said Sterling was armed but that there are still questions about what happened, according to the Associated Press. The police chief at a news conference demanded answers and said “no stone will be left unturned” as authorities work to determine what prompted either one or both of the officers to pull the trigger.

“Like you, there is a lot that we do not understand,” Dabadie said. “And at this point, like you, I am demanding answers. Like you, all my prayers are with this community and especially the community and loved ones of Mr. Sterling.”

Dabadie said the department is seeking to gather information from the officers’ body cameras. The U.S. Justice Department has opened a civil rights probe into Sterling’s fatal shooting.

Who was Sterling?
Sterling was remembered as a loving father. His 15-year-old son, Cameron Sterling, wept uncontrollably at a news conference his family held on Wednesday until he was removed from the view of cameras as his mother, Quinyetta McMillon, 31, pledged to fight for justice.

“As this video has been shared across the world, you will see with your own eyes how he was handled unjustly and killed without regard for the lives that he helped raise,” McMillon told reporters.

“As a mother, I have now been forced to raise a son who is going to remember what happened to his father that I can’t take away from him,” she added. “He is at an age of understanding. I hurt more for him and his loss.”

Sandra Sterling, the aunt of the slain main who raised him after his mother died, said Sterling “didn’t deserve” what happened to him.

Who are the officers?
Authorities identified the two police officers involved in Sterling’s shooting as Blane Salamoni and Howie Lake. Salamoni has been with the Baton Rouge Police Department for four years, while Lake has served for three years, authorities said. Both work for the Uniform Patrol Division and have been placed on paid administrative leave.

“The officers feel they were completely justified,” District Attorney Hillar C. Moore III told The Advocate, adding that Baton Rouge police interviewed the two officers before the case was turned over to the Justice Department.

In 2014, Lake was one of six Baton Rouge police officers who were placed on administrative leave after being involved in a Dec. 13 shooting of a man who attempted to flee police, the Times Picayune reports. Baton Rouge Police Cpl. L’Jean McKneely told the newspaper at the time that the suspect was shooting at the officers while trying to run away from authorities on foot. The suspect survived the shooting with only moderate injuries, according to The Advocate. 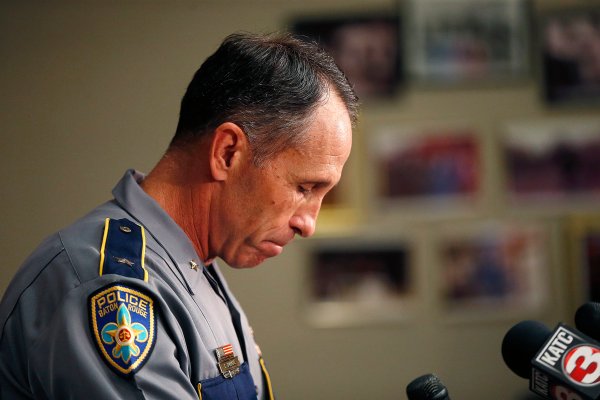