At least 18 protesters were killed in Myanmar on Sunday, in the deadliest day of clashes between pro-democracy protesters and security forces since a Feb. 1 military coup. But as peaceful protesters face off against the police and military on the streets, another war is being waged online.

On Thursday, Facebook banned Myanmar’s military from its platforms with immediate effect. It’s the strongest action the company has taken against the armed forces, known as the Tatmadaw, or indeed those in power in any nation.

It is also the culmination of a years-long dance between Facebook and Myanmar’s military, which infamously used the platform to spread hate speech and disinformation about the country’s Rohingya Muslim minority in the years leading up to 2017, in a campaign that ended in mass murder, rape and arson, which the U.N. said was carried out with “genocidal intent.”

Amid global outcry over Facebook’s role in those events, the company admitted in 2018 that it did not do enough to prevent the abuse of its platform leading to offline harm.

Since then, Facebook has banned individual military leaders in Myanmar as well as prominent nationalists. It also poured resources into tackling hate speech and disinformation, and hired a dedicated staff in the country. But until Thursday it had not banned the military as an entity, perhaps in a bid to ensure it could retain continued access to Myanmar, where it is synonymous with the Internet for half the population.

Protesters defend themselves with makeshift shields during clashes with riot police on February 28, 2021 in Yangon, Myanmar.
Hkun Lat/Getty Images

After Myanmar began to emerge from its prior period of military dictatorship in 2011, Facebook became central to daily life. By initially allowing its app to be used without incurring data charges, Facebook quickly became the core Internet service for many newly-online Burmese. The site offered a space for public discourse and a hub for commerce, as well as a vital tool for activists, human rights campaigners and a nascent pro-democracy movement in a previously closed society.

“Facebook has had a pretty rough history in Myanmar, and it’s true their platform was abused for genocidal purposes a few years ago,” says David Kaye, a former U.N. special rapporteur for freedom of expression. “I don’t know why they’ve taken so long to get to this point, but part of it may be that they genuinely and in good faith wanted to maintain the platform for the millions of users in the country who really rely on it.”

All of that changed after the coup on Feb. 1, when the Tatmadaw removed the civilian government of Aung Sang Suu Kyi, claiming that her pro-democracy movement’s landslide victory in November elections was a result of voter fraud.

After protesters began using Facebook to coordinate the civil disobedience movement in reaction to the coup, the military temporarily blocked the site nationwide on Feb. 4, and imposed a rolling overnight curfew on Internet access. Facebook is still blocked by most Internet service providers in Myanmar, according to Arturo Filasto, project leader of the Open Observatory of Network Interference (OONI), an internet censorship watchdog. But the site is still accessible via virtual private networks (VPNs), which have been widely taken up by Internet users in the country.

Announcing its ban of the Tatmadaw on Thursday, Facebook said that repeated violations of its rules by the military since the coup, including “content that violates our violence and incitement and coordinating harm policies,” had contributed to its decision.

“Events since the February 1 coup, including deadly violence, have precipitated a need for this ban,” said Rafael Frankel, a Facebook policy director, in a statement. “We believe the risks of allowing the Tatmadaw on Facebook and Instagram are too great.”

The ban goes beyond official accounts and military leaders. It also prevents military-owned businesses — in sectors from tourism to banking — from advertising on Facebook, using for reference a 2019 U.N. report on the government’s sprawling business interests. But the ban is not all-encompassing, said a tech policy expert based in Yangon, who spoke on condition of anonymity because of the unsafe situation in the country. “The ban is not a massive change insofar as it doesn’t touch on the covert operations that are out there,” they said. “It’s not like the military doesn’t have other pages it can use. So there’s a lot of gray area about how broad the ban goes.”

Still, the news of the ban was welcomed by protesters on the ground as an act of “solidarity,” says Thinzar Shunlei Yi, an anti-coup activist in Myanmar. “It’s like Facebook agrees with us. It boosts our confidence, and it has strengthened our movement.”

Banning the Tatmadaw now places Facebook firmly on the side of the pro-democracy movement in Myanmar. What happens next could set a precedent not just in Myanmar but globally, where American social media platforms are increasingly caught between their commitments to freedom of expression, and authoritarian leaders who have the power to punish the platforms—and even oust them from their countries.

Security forces intervene in protesters as they gather to protest against the military coup in Mandalay, Myanmar on February 28, 2021.
Stringer/Anadolu Agency via Getty Images

A new precedent, or an exception that proves the rule?

Around the globe, Facebook and other social media companies have been making tradeoffs with leaders for years both democratic and authoritarian. But unlike Facebook’s recent decision in Myanmar, these tradeoffs have tended to prioritize reducing the risk of government retaliation that might expel the social media platforms from lucrative foreign markets.

In Vietnam, for example, Facebook has increasingly complied with demands from the authoritarian government to silence criticism on the platform, in what Facebook said was a decision “to ensure our services remain available and usable for millions of people in Vietnam, who rely on them every day.”

And internal Facebook emails from 2018, recently revealed by ProPublica, show that senior executives including COO Sheryl Sandberg agreed to comply with a demand from the Turkish government to block the page of a Kurdish opposition group within the country, in order to prevent Facebook being cut off in Turkey.

In a statement to ProPublica about the Turkey emails, Facebook spokesperson Andy Stone said: “We strive to preserve voice for the greatest number of people. There are, however, times when we restrict content based on local law even if it does not violate our community standards.”

Just last month, Twitter was forced to block several tweets by anti-government protesters in India, after the government slapped the company with a legal order. Twitter had earlier pushed back against the demand, saying the tweets constituted free speech, but after New Delhi threatened Twitter staff in the country with charges that could result in jail time, Twitter reimposed country-specific blocks on many of the tweets.

Kaye, the former U.N. special rapporteur for freedom of expression, says that when authoritarian governments make demands on social media companies, the companies’ responses—which almost always carry implications for human rights—inevitably blur together with questions about the best business decision for the company.

“We saw in the Turkey example that those discussions ultimately get pushed up to the most senior level, out of the area of human rights policy and into the zone of a kind of business decision,” says Kaye. “I don’t think it’s clear to anybody on the outside which elements predominate there.”

So is Facebook’s ban of the Tatmadaw in Myanmar a new precedent for how social media platforms will stand up to authoritarian leaders around the world in the future? Or is it the exception that proves the rule?

Even Yi, the activist who welcomed Facebook’s ban of the Tatmadaw as a sign of the company’s solidarity with the pro-democracy movement, says that Facebook may have treated it as simply another business decision, perhaps mindful of the public relations disaster that the targeting of the Rohingya was for the company.

“I think they risked it, because the impact if they didn’t do it now would have been unimaginable,” she says. “They would face similar accusations just like they faced during the Rohingya crisis — they can’t risk their reputation like that.” 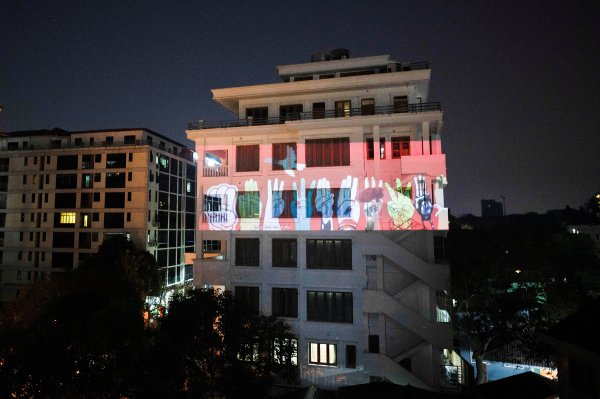 How Myanmar's Artists Are Fighting Military Rule
Next Up: Editor's Pick