Fox News and Donald Trump Have a Dysfunctional Relationship, But It Works For Them

All the signs of codependency were there. The irrational desire to make the other party happy. Manifestly low self-esteem. Abandonment issues. A compulsive desire to know what the other is doing.

Seldom has such an amateur armchair diagnosis been so easy as when ex-President Donald Trump and the Fox News switchboard reconnected on Wednesday for a conversation about the death of conservative media personality Rush Limbaugh. It was a two-way manipulation of the moment. Trump had a message to get out and Twitter is no longer available to him. Fox is a ratings machine and getting the still-popular Trump to talk about the passing of the combatively conservative host was going to be a cultural moment for its viewers.

So it became mutually beneficial to set aside years of bad blood between the network and the New Yorker-cum-Floridian. (“Blood,” it must be said, is a word that turned many a head after then-candidate Trump in 2015 said a Fox News anchor had “blood coming out of her wherever” when Megyn Kelly dared ask him tough questions about his sexist language during the 2016 field’s first debate and spent the next year and a half stalked by Trump’s tweets.)

Before he started running for President and then as a candidate, Trump was a regular fixture on Fox programs, especially its morning show. He’d call in from his Trump Tower perch nine blocks north of Fox HQ and haul off on the topic of the day. As much as his reality show, The Apprentice, the Fox open-invite kept Trump in the zeitgeist. After all, Trump didn’t have room to promote the baseless conspiracy theories about former President Barack Obama’s birthplace on his own show. Fox—and Limbaugh, whose radio show had the highest ratings in the country—gave Trump the outlet he needed to spread those lies.

As a candidate, Trump continued using Fox as a crutch, infuriating his primary rivals who were told they had to be in a studio if they wanted to appear on a show while Trump literally phoned it in. Trump didn’t need to get out to Iowa or up to New Hampshire every week; his voters were glued to Fox, top consultants to Trump’s rivals bemoaned. But there was nothing they could do to stop it; Trump had great ratings and his rivals did not.

As President, Trump tried to have it both ways with Fox, both using it as a bullhorn and punching bag, saying it had drifted too far from what he saw as its core identity as a safe space for center-right news consumers, aggrieved conservatives and QAnon-heeding conspiracy theorists. You can’t ignore the fact that the total number of eyeballs on the network’s broadcast slipped in January to their lowest point in 20 years, trailing CNN and MSNBC simultaneously for the first time ever. (The network’s total viewership surpassed CNN’s on Feb. 15, according to Nielson.) Trump was openly campaigning for Fox alternatives until Twitter told him his tweets were too toxic to exist at all. I’d link to the pro-OANN and -Newsmax promotional material that the President sent, but they’re now deleted.

Eventually, it became too much for the network. It’s embarrassing to be seen as a de facto defensive tackle for the Trump White House while getting taken down by your own captain. In the run-up to last year’s elections, Trump seemed to indicate that he had landed a deal to do a weekly appearance by phone on the network’s morning show — something the network tried to quash. While the primetime, opinion-based hosts still count themselves members of the Make America Great Again legion, the daytime anchors try to keep in the realm of facts. Sean Hannity will forever carry buckets of Trump’s talking points, while the likes of Bill Hemmer and Harris Faulkner keep the partisan jousting at least rooted in defensible truths.

It was Hemmer and Faulkner, anchoring that stretch of coverage of Limbaugh’s death, who had to navigate the moment truly no producer could have prepared for. Limbaugh’s death at age 70 after a public battle with cancer was a seismic and sincere event on the conservative media landscape, but not surprising.

What was out of the ordinary was that Trump’s appearance on Fox was also his first interview since leaving Washington and skipping the Inauguration of his successor, Joe Biden. The first network to get the interview with the newly-relieved President is a big deal, and that is even with ex-Presidents who didn’t fire up a crowd to stop Congress from accepting his loss, watch as a mob stages an insurrection at the Capitol and then almost immediately face impeachment for inspiring an insurrection. This was one for the history books.

And yet the 24-minute conversation failed to adhere to the most basic expectations of journalism. Trump was not asked about his second impeachment trial, or the charge at the heart of it: that he had incited a deadly riot at the U.S. Capitol on Jan. 6.

Any number of theories can explain it. Knowing the intense following Limbaugh has among his fans, it’s tough to see any questions about a violent insurrection inserted into what was essentially a televised memorial service. Dittoheads, as Limbaugh’s fans were known, would react none too kindly with their remotes and ad dollars.

Trump himself professed to have been friendly with Limbaugh, an early endorser of the 2016 bid, and awarded him with a Presidential Medal of Freedom last year. Anything that nudged Trump toward anger would not end well. Fox News — like any network — wanted the first interview with Trump, and Trump has been known to cut interviews short after getting annoyed before. A question inserted into a phone interview with Trump about Limbaugh mightn’t have been worth the risk.

“Mr. President, we probably have a hundred questions for you, but so many of them are not appropriate for this venue, so we’ll keep it on this topic for now and we appreciate your time today,” Hemmer said.

He and Faulkner made a half-hearted attempt to get Trump to discuss what advice Limbaugh had given him during the race and after his loss. But neither journalist interrupted Trump when he claimed he had actually won the election and his loss was the result of problems with “voter tabulation.”

And neither journalist stepped in to correct Trump that there were skirmishes at state capitols across the country and an actual riot on Capitol Hill, egged on by his pleas to “fight like hell” to “stop the steal.”

Those questions will have to wait for a sequel. 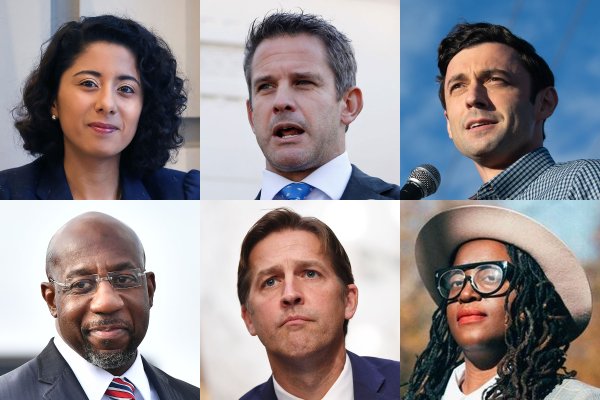 Introducing the People Who Will Shape Washington for the Next Generation
Next Up: Editor's Pick