It’s one of the oldest stories of modern times: after growing up in a place that makes them feel like a freak or an abomination or a space alien, a young person lights out for the big city, in search of their people. But what happens if you arrive, find precisely the community you’ve spent years longing for, start living the liberated life of your dreams—and then it’s over just as quickly as it started? The party becomes a nightmare. Everything fun is suddenly dangerous. Your chosen family starts dying. It’s almost as though the universe is doubling down on the 18 years’ worth of shame you absorbed on your way to freedom.

That is the predicament facing the group of friends at the center of HBO Max’s deeply humane, richly observed, frequently funny and fully devastating It’s a Sin. Premiering Feb. 18, the miniseries, which broke viewership records when it aired in the UK, spans ten years at the outset of the AIDS crisis in London. Creator Russell T. Davies—the prolific TV producer who previously chronicled aspects of British gay life in Cucumber, A Very English Scandal and the groundbreaking Queer as Folk—wrote all five episodes, anchoring his scripts in real history that has haunted him for decades and deploying rage, empathy and humor in just the right places.

Read More: How the New British Drama It’s a Sin Is Telling the History of the 1980s AIDS Crisis—and Sparking Change in the Present

The show opens in the fall of 1981, as a closeted teenage chatterbox named Ritchie Tozer (Olly Alexander of the pop act Years & Years) is preparing to leave his repressive middle-class home on the Isle of Wight and study law at a university in London. On his way to the promised land, he packs up a cache of gay porn magazines he’s worried his mom will find and throws a pack of condoms slyly bestowed upon him by his father into the sea. Intimidated, at first, by the openly queer community at his new school, Ritchie is coaxed out of his shell by a friendly drama major, Jill Baxter (Lydia West of Davies’ anxious 2019 series Years and Years; no relation to Alexander’s band), who introduces him to the boy he’s had his eyes on: tall, long-haired, handsome Ash Mukherjee (Nathaniel Curtis). The guys’ first hookup goes disastrously, due to an embarrassing hygiene issue that feels painfully true to Ritchie’s lack of experience, but the seeds of friendship have been sown. Ritchie falls in love with theater. And when Jill comes home with him for the holidays, the Tozers breathe an undue sigh of relief.

Gay nightlife shatters the trio’s higher-ed bubble, and they meet two pals who will become their roommates in a dingy but homey flat dubbed the Pink Palace. Colin Morris-Jones (Callum Scott Howells) is a working-class kid who’s left his loving mum in Wales to apprentice on Savile Row. Shy, sweet and naive, he’s rescued from the unwanted advances of his old, married boss by a kind colleague (played by Neil Patrick Harris, one of a few queer elders who appear in small roles) who orients him to the more enjoyable facets of the gay scene in London. Meanwhile, construction worker Roscoe Babatunde (Omari Douglas) has spent his whole life under the thumb of his conservative, Nigerian father, who picks him up at the end of every day to ensure he’s not seeing men. Finally pushed to his limit, Roscoe flees home in a mini skirt and crop top, gets a job at a bar and dreams of living well enough to exact revenge on his family.

And then the plague hits. Five episodes, each spaced a couple of years apart, doesn’t seem like it could do justice to a story of this scale. But vivid, efficient, specific character development is Davies’ strength; here, we watch five young people grow into their identities as their proximity to a lethal threat also grows. At first it’s vague reports of “gay cancer” in the U.S., then whispers within the local community, then diagnoses hitting ever closer to home. The 10-year timeframe illustrates how slowly reliable information about AIDS spreads but how quickly death multiplies.

After sleepless nights spent worrying about how the virus spreads, Jill does her research and becomes an activist, while her shell-shocked roommates mostly keep bed-hopping. (One of them greets negative HIV-test results with a giggle and the exclamation: “I f-cked everyone, that’s not fair!”) Ritchie is a singularly memorable character, quickly transformed from nervous provincial teen to a 24/7 performer who always has to be the center of attention, and who interprets reality to fit his own self-serving worldview. Early on, he delivers an epic rant (one that casually exposes some of the most harmful myths of the time) claiming that AIDS is a drug-company hoax. Years later, he reaches his limit on the topic at a dinner party. “The worst thing about it—the absolute worst—is that every single conversation has to go on and on about AIDS,” he gripes. “I came to London when I was 18, I thought: great, now I can be gay. But then I just end up as this problem.”

The show is perfectly cast; newcomers Douglas, Howells and Curtis hold their own with more experienced cast mates, as well as with guest stars like Harris, Stephen Fry and Keeley Hawes. Ash feels a bit underwritten, especially in comparison with Ritchie. Jill can hew too closely to the stereotype of the chaste theater girl who surrounds herself with gay men, though in many ways the show is a love letter to women like her, who showed up for their chosen families when it mattered most. I ended up loving each of the five central characters, for all their imperfections; I’m sure I won’t be unique in feeling that they could’ve been my friends, growing up, too.

That is because It’s a Sin—which is easily the best season of TV I’ve watched so far this year—gets the big, emotional moments and moral arguments right. The pitfalls and clichés of AIDS narratives are many. It’s easy to unwittingly punish characters for their queerness or promiscuity, rather than dramatize the horrible randomness of an epidemic compounded by the bigotry and willful ignorance of straight society. For more sympathetic writers, the temptation is to elevate the men who were lost during those early years into angels or martyrs or saints. Davies does something better. He insists that they shouldn’t have had to be monks to survive into middle age—and he directs righteous, well-deserved anger at the adults, in Britain and beyond, who raised their children to live in shame. 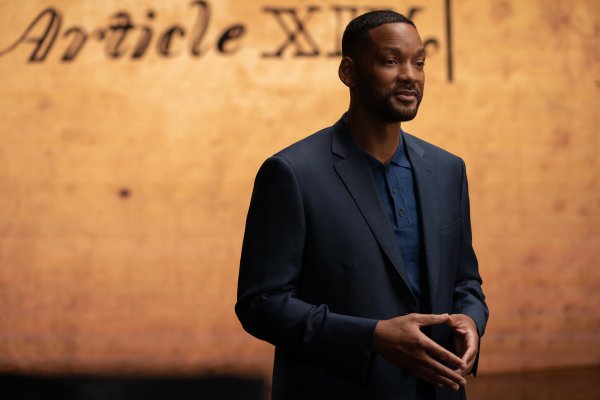 Teaching Black History Has Become a Flashpoint. Three New Docuseries Refuse to Sugarcoat Their Narratives
Next Up: Editor's Pick