What the Arrest of Disha Ravi, a Climate Activist Linked to Greta Thunberg, Says About India’s Crackdown on Dissent

Activists belonging to various human rights organisations hold placards as they stage a demonstration against the arrest of the activist Disha Ravi by Delhi police for her alleged involvement in the instigation of violence during the farmers protest on India's Republic Day, in Bangalore on Feb. 15, 2021.
Manjunath Kiran—AFP/Getty Images
By Amy Gunia

Police in India have accused Disha Ravi, a 22-year-old climate activist with ties to Greta Thunberg, of sedition. Her alleged crime: helping to create and share an online “protest toolkit” that outlined how to support the mass protests by farmers in the country.

Critics of Prime Minister Narendra Modi’s government say the charges against Ravi are politically motivated and represent an escalation of the Indian government’s clampdown on dissenters.

“It’s a brazen move by Modi to ramp up repression and to wait to see if there are international repercussions,” says Subir Sinha, a senior lecturer in institutions and development at SOAS, University of London.

Ravi’s Feb. 13 arrest, and the connection with Thunberg, who shared the “toolkit” on social media, have brought even more international scrutiny to India’s backsliding democratic freedoms, including worsening freedom of the press and detentions of journalists, internet shutdowns and violent responses to non-violent protesters.

The farmers’ protests are some of the biggest in the country’s history, and present an unprecedented challenge to Modi’s Hindu-nationalist Bharatiya Janata Party (BJP) government. The protests have already received worldwide attention—including viral tweets from Rihanna and Vice President Kamala Harris’ niece Meena Harris.

Here’s what to know about Ravi’s arrest.

What are the accusations against Disha Ravi?

Ravi, the founder of the Bengaluru chapter of Thunberg’s climate justice movement Fridays for Future, has been charged with sedition—the crime of inciting hatred against the government.

Delhi police say Ravi is a “key conspirator” in the “formulation [and] dissemination” of the “toolkit” document containing methods for supporting the farmers’ protest.

Police allege she also started a WhatsApp group and collaborated to make the document. “She was the one who shared the [document] with Greta Thunberg,” they said.

Thunberg has not commented.

Police said the document contained links to websites that supported a Sikh independence movement, and that the sharing of the document on social media indicated that there was a “conspiracy” behind violence on Jan. 26, when farmer protests escalated into clashes with police.

“The main aim of the toolkit was to create misinformation and disaffection against the lawfully enacted government,” Delhi police official Prem Nath said at a Monday press briefing.

Ravi told a Delhi court that she did not make the document, but she edited two lines of it, according to local media.

Warrants have been issued for at least two other activists, including Nikita Jacob and Shantanu Muluk.

Police say that the three activists held a Zoom meeting with a “pro-Khalistani” organization in Canada, referring to a Sikh independence movement, according to local media.

Why was Disha Ravi arrested?

Activists and critics of Modi’s government say Ravi’s arrest is part of a larger crackdown on all forms of dissent in the country.

“The government wants us to believe that anyone and everyone who disagrees with its views is part of some sinister international conspiracy,” Satish Deshpande, a sociology professor in India, says. “The aim is to terrorize dissenters into silence.”

Read More: COLUMN – The Farmers’ Protests Are a Turning Point for India’s Democracy—and the World Can No Longer Ignore That

Since November, hundreds of thousands of farmers have been protesting on the outskirts of the capital against new agricultural laws that aim to deregulate and open India’s agricultural industry to free-market forces. Farmers are worried they could lose business and land to large corporations. Tweets from international celebrities, including Rihanna, have been met with a swift backlash from the Indian government, who labeled the criticism propaganda. Swedish climate activist Thunberg tweeted in support of the protests, posting a link to the online toolkit Ravi is accused of helping to create.

“I think when Greta tweeted, Rihanna tweeted, they had to find a narrative to say that there is something of a threat to the nation,” says Leo Saldanha, who works for the advocacy group Environment Support Group and is also based in Bengaluru.

Gilles Verniers, an assistant professor of political science at Ashoka University in India, says that any international attention is unlikely to make the government change its stance as “they equate concessions with expressions of weakness.”

Saldanha says activists like him have lived under “the threat of excessive state action” for several years.

The most plausible explanation for what appears to be an escalation in the government’s crackdown is the continuing farmers’ protests, Deshpande says.

“The farmers’ protests are holding firm despite all odds,” he says. “The current moves show that the government is sticking to its formula of declaring all democratic opposition—or even dissent—to be acts of sedition.”

How are people reacting?

Dozens protested on Monday in cities across India calling for Ravi’s release and a petition started by Saldanha’s Environment Support Group calling for Ravi’s immediate release has received more than 25,000 signatures in less than 48 hours.

The environmentalist says that the government’s attempt to silence youth activists is “not working because there’s so many have decided to speak out.”

Arvind Kejriwal, the chief minister of Delhi, called the arrest “an unprecedented attack on democracy.”

Member of parliament Jairam Ramesh said her arrest shows the “intensifying murder of democracy in India.”

Siddharth, an actor popular in India tweeted his support. “Standing unconditionally in solidarity and support with #DishaRavi,” he wrote. 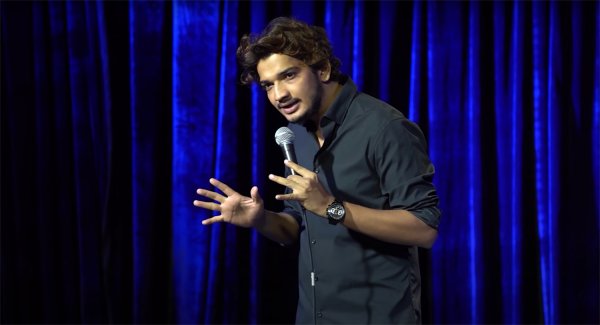 Munawar Iqbal Faruqui Was Arrested for Joke He Didn't Tell
Next Up: Editor's Pick