With Free Medical Clinics and Patient Advocacy, the Black Panthers Created a Legacy in Community Health That Still Exists Amid COVID-19

In the first minutes of the new film Judas and the Black Messiah, released Feb. 12, it shows archival footage of the free ambulance service started by the Black Panther Party’s Winston-Salem, N.C., chapter in 1972. And the party’s Illinois chairman Fred Hampton, played by Daniel Kaluuya, sums up the risks of going to a hospital for a Black American, “We think it’s normal for us to go to the hospital with a runny nose and come home in a body bag.”

These scenes are a glimpse at a lesser-known aspect of the Black Panther Party’s community health work of the 1960s and 1970s that has become more widely recognized in recent years. The rise of the Black Lives Matter movement has inspired a new appreciation for the Black Panthers and attempts have been made to recast their image in history and highlight the work they did in their communities, such as serving free breakfast to children and setting up more than a dozen medical clinics nationwide. It’s public health work that also demonstrates the long history of problems activists are still trying to solve today.

“Everybody could benefit from taking a look at the Ten-Point platform that [the Black Panthers] had,” says Dr. Mary Bassett, former NYC Health Commissioner in Mayor de Blasio’s administration, whose career in public health started as a volunteer at the Panthers’ free clinic in Boston. “It’s fully in the tradition of documents like the Declaration of Independence or the ANC’s freedom charter. And to understand that [the Black Panthers] were about much more than the berets that they sported and the guns that they carried. They were about building a society that supports human dignity.”

In the last year, the Black Panthers’ health programs have only become more relevant. The COVID-19 pandemic is magnifying centuries of racial disparities in healthcare; Black and Latino Americans are more likely to be hospitalized and die from the coronavirus and more white Americans are getting vaccinated than minorities. At the same time, the pandemic has converged with the epidemic of police brutality magnified by George Floyd’s death.

Huey P. Newton and Bobby Seale formed the Black Panther Party in Oakland, Calif., in 1966 to combat police brutality by patrolling minority communities to prevent police harassment. Out of that evolved free medical clinics that were designed to provide preventative care in the late 1960s and early 1970s. As Fred Hampton is often quoted as saying in an undated speech, “First you have free breakfasts, then you have free medical care, then you have free bus rides, and soon you have FREEDOM!”

The Black Panthers’ emphasis on providing community health services grew out of a deep distrust in minority communities towards the traditional health care system, which they saw as potentially dangerous to themselves and their families.

President Lyndon B. Johnson’s administration rolled out its Great Society and War on Poverty programs in the mid-1960s. The Black Panthers didn’t think the programs did enough to help the poor, with some members even doubting if equal access to quality healthcare could exist in a capitalist society. President Nixon signed the National Sickle Cell Anemia Act in May 1972 to provide funding for research and prevention of the disease that’s most common in Black Americans. The Black Panthers saw the move as lip service to Black voters, worried that the funding would not go the communities that needed the resources the most, according to sociologist Alondra Nelson.

The long history of distrust of medical professionals within the Black community would only become clearer to white Americans in July 1972, when the Associated Press broke the news that for four decades, the Tuskegee Syphilis Study allowed hundreds of Black American men to go untreated so scientists could study the effects of the disease.

News of the Tuskegee Syphilis Study underscored the Black Panther Party’s vision for healthcare it shared in the 1972 update to its platform:

Overall, there were free health clinics in 13 cities nationwide in the late 1960s and early 1970s, Nelson writes in her book on the history of the Black Panther Party’s community health programs, Body and Soul: The Black Panther Party and the Fight Against Medical Discrimination. These clinics, in predominantly Black communities, were staffed by volunteer medical professionals and kept stocked by pharmaceutical companies and medical supply companies. Clinics provided treatments for cold and flu symptoms, especially for kids, and a range of preventative care, such as physicals, immunizations, gynecological exams, dental exams and cancer screenings.

Many clinics went even further. As a college student at Harvard volunteering at the Panthers’ Boston clinic, Bassett set up a sickle cell testing program with a screening test not widely used until the Panthers program. If patients needed to see another doctor for further care, a Panthers member could provide an escort to a specialist’s office to help advocate for them. The Winston-Salem chapter had an ambulance service because ambulances took a long time to get to Black and Brown neighborhoods, according to Nelson’s book. Volunteer medical professionals and activists also went door-to-door in housing projects assessing residents. In the 1970s, Cleo Silvers, a member of the Panthers’ Harlem Chapter, would visit neighbors and test for preventable diseases with a team that included activists from the Panthers and the NYC Latino activist group the Young Lords—an example of the coalition building between likeminded groups.

“We’d go in, and there would be an elderly person in some apartment who needed, really needed, to see a doctor but they were afraid to go to the doctor,” recalls Silvers. “[In] almost every apartment, there was somebody who had some kind of illness that needed to be treated right away. But the only way to find that out was to go and do the door-to-door work and find out what’s really going on in the community.”

But the same FBI surveillance of the Black Panthers that plagued the party—and that backed the assassination of Hampton in 1969—also forced the clinics to shutdown. By the early 1980s, most of the medical clinics closed because of the FBI’s COINTELPRO. This counterintelligence program, meant to create mistrust of the Black Panthers, circulated bad press and negative sentiment towards the clinics’ work, according to Nelson. Police raids of the Chicago and L.A. clinics resulted in broken medical equipment and clinics that received state funding saw those monies vanish during Reagan-era budget cuts.

“[The FBI] did everything you can think of, from infiltrating the organization to pushing lies in the media,” says Mary Phillips, Assistant Professor of Africana Studies at Lehman College who has written articles about women in the Black Panther Party. “This is a major apparatus that worked to really destroy the organization. Many people think of [the Black Panthers] as criminal thugs, and that’s far from the truth. The Panthers were not about violence. They were actually about restorative care. They were actually about healing the community—mind, body and soul.”

The anti-Black Panther Party propaganda campaigns have shaped the way people learned about and perceived the group for years afterwards. In 2017, inspired by Black Lives Matter protests, teachers Adam Sanchez and Jesse Hagopian reviewed textbook portrayals of the Black Panthers, and some claimed the group “embraced militant strategies and the use of violence” and that, “public support for the Civil Rights Movement declined because some whites were frightened by the urban riots and the Black Panthers.”

The Black Panthers were also more aligned with Martin Luther King Jr. than some textbooks say, and their health programs were an effort to continue the Poor People’s Campaign that King championed before he was assassinated, according to Jakobi Williams professor of History at Indiana University-Bloomington and author of From the Bullet to the Ballot: The Illinois Chapter of the Black Panther Party and Racial Coalition Politics in Chicago. “They saw themselves as continuing Martin Luther King’s work, as continuing King’s legacy and King’s intentions of bringing all poor people together to fight against the capitalist structure of exploitation of the poor,” he says.

In April 2020, pediatric surgeon Dr. Ala Stanford launched The Black Doctors COVID-19 Consortium in Philadelphia. She brought together medical professionals to conduct COVID-19 tests and vaccinations on the grounds of schools, churches and parking lots, so residents don’t have to trek to affluent white neighborhoods where more testing sites were located. As of Feb. 18, they’ve tested more than 26,000 people in southeastern Pennsylvania and vaccinated more than 10,000 people. She has seen firsthand the implicit bias in healthcare settings that the Black Panthers were trying to combat 50 years ago.

“There were staff members in hospitals that could not get tested [for COVID-19] that were African American, where their white supervisors would say, ‘Oh, you’re not really sick enough to meet criteria, you don’t look bad,'” Stanford says. “They would come to us to get tested, only to find out they were positive. Meanwhile, they were at work, spreading it among their colleagues, among patients… And so now, when you talk about vaccines, and only 25-30% of healthcare personnel of color are accepting it in the hospitals, much of that has to do with how they felt they were treated during the pandemic.”

Stanford said she learned about the Black Panthers from her father, who was an activist. Growing up she viewed the Black Panthers as trying “to make things equitable” and protect “women and children in the Black community that were being oppressed.” And she’s equally aware of those who paved the way for her to becoming a leading physician in her community.

“It’s not lost on me that so many sacrificed so I could have this opportunity,” she said. “So when I’m out here and I’m advocating and I feel like I’m climbing up a hill that has grease all over the steps and all over the sides, I keep climbing, because I realize that none of it is as challenging as what my predecessors, my elders, and my ancestors had to go through.”

Stanford plans to continue this community health work long after the pandemic is over.

“The next step for me is taking the COVID-19 out of the [name] and it’s just The Black Doctors Consortium,” she explains. “We promote health equity by seeing patients in the community, [offering] second opinions, doing education, teaching about nutrition [and] how to take care of yourself…We are in the community because we want to be there, and we want you to live your best life and be as healthy as you can.” 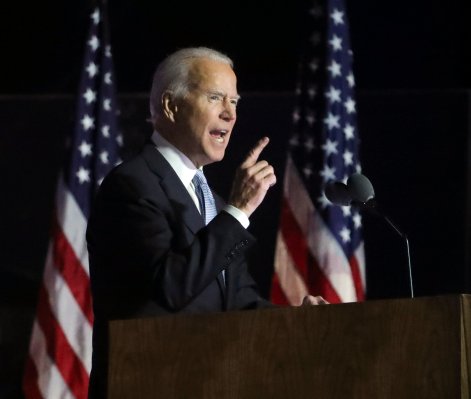 How Joe Biden Can Help Fight Alzheimer's
Next Up: Editor's Pick